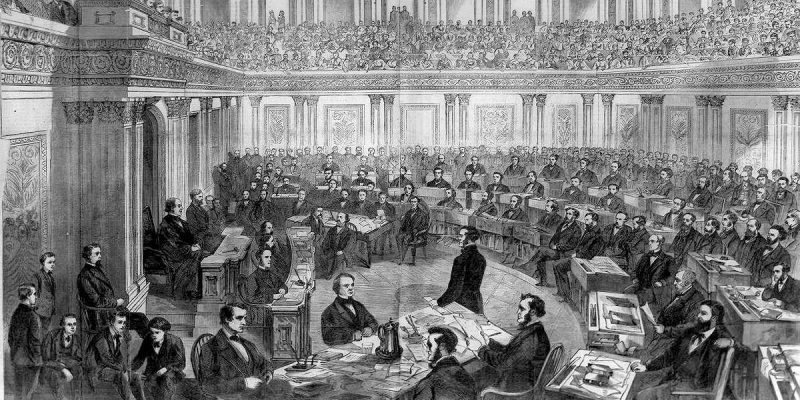 There was once a time when men of honor defended the Constitution above and before politics or party.  Sadly, those days have long since passed.  In watching and reading about some of the “impeachment” hearings currently taking place in Congress, one fundamental principle of American law and our Constitution kept coming to mind, “there can be no crime without law.”  Our Constitution addresses this fundamental principle in two specific prohibitions both spelled out in Article I of the Constitution which states, “No Bill of Attainder or ex post facto Law shall be passed.”

First, what is a “Bill of Attainder”? A Bill of Attainder is an act of a legislature declaring a person or group of persons guilty of some crime (for which a law did not exist at the time committed) and punishing them, often without a trial.  The effect of such a bill is to nullify the targeted person’s civil rights,  and deprive them of due process.  This was something in the times of the Founders to have been used by the tyrannical British government to imprison or even execute those who dared challenge the monarchy.  Weary of the abuse of power of the British form of government, the Founders spelled out a prohibition of such action right there in Article I of our Constitution.

Second, what is an “ex post facto” law? An “ex post facto” law is a law that retroactively changes the legal consequences of actions that were committed, or relationships that existed, before the enactment of the law.  In other words, it is a law which criminalizes conduct, which at the time of the conduct was not criminal, and seeks to punish an individual for actions which, when they occurred, did not violate any law.  Thomas Jefferson wrote that, “[t]he sentiment that ex post facto laws are against natural right is so strong in the United States, that few, if any, of the State constitutions (even prior to the adoption of the US Constitution) have failed to proscribe them.”

I recently stumbled upon a Harvard Law Review article, “High Crimes Without Law” written by Nikolas Bowie, which describes these fundamental principles of American Constitutional law with great skill and detail.  Mr. Bowie uses the argument laid out by former Supreme Court Justice Benjamin Curtis, who defended President Andrew Johnson whom Congress sought to impeach in part because President Johnson had insulted members of Congress in political speeches.

Over two days in April of 1868, Justice Curtis delivered his opening argument to the Senate in defense of President Andrew Johnson.  Justice Curtis’ arguments in 1868, are grounded in the fundamental rights guaranteed by our Constitution, and which were in part the basis of the split between the American colonies and the British monarchy, that no American, not even the President should be tried and convicted of a crime which was not defined by a law of the United States when the acts were committed.   Justice Curtis stated, “‘[h]igh crimes and misdemeanors’ against what law? There can be no crime, there can be no misdemeanor without a law, written or unwritten, express or implied. There must be some law; otherwise there is no crime.”

As in 1868, the current Democrat-led Congress seeks to impeach and remove the President over actions which they disagree with, but which constitute no violation of law.  As stated by Justice Curtis, “the Constitution’s prohibition on ex post facto laws, is intended to provide a meaningful check on Congress’s ability to punish people for whatever conduct it felt like.”  Justice Curtis concludes that it would an affront to our Constitutional freedoms to allow senators, “sitting as judges, not only after the fact but while the case is on trial, to create a law by himself to govern the case.”  Such a senator would, in effect, be saying: “if I cannot find a law I will make one.”

Today’s Democrats argue that they must impeach President Trump to preserve our Constitution, but in reality they seek to destroy our Constitution by depriving the President of his fundamental constitutional rights for the sole purpose of achieving a political end, which they cannot achieve through the votes of the American people.  To remove a President, without any legal justification, to convict a President of “high Crimes” without law, is a direct deprivation of the fundamental principals upon which this Country was founded.  Such action would restore the tyranny of British law which allowed an individual to be convicted and punished for an action which was not a crime when committed.  The ends can never justify these means.  No political victory can justify the destruction of the very protections the Founders risked life and limb to secure for us.

In 1868, most felt that Justice Curtis’ sound constitutional arguments would fall on deaf ears.  The Senate, overwhelmingly Republican and adverse to President Johnson, was sure to remove this Democrat from office who should have never been President in the first place.  President Johnson was a Democrat elected as Vice President under the original constitutional system, since replaced, which often allowed for a President of one party and a Vice President of another.  Johnson had only become President because of a coup d’état, the assassination of President Lincoln. Surely, the Republican’s would remove Johnson, and install a Republican as President.

Then to the surprise of the Republican majority, another honorable man and patriot, Republican Senator Lyman Trumbull, stepped forward to defend President Johnson. Senator Trumbull is a name most will not know, but whom our country owes an enormous debt of gratitude.  He was part of a group referred to as the “Founding Sons,” the leaders who in the mid-nineteenth century first eliminated slavery, and then set up the constitutional and statutory structures for national protection of civil rights.  Senator Trumbull was the author of the Thirteenth Amendment to the Constitution which abolished slavery.  He also authored the first two major civil rights bills, the Freedmen’s Bureau Bill and the Civil Rights Act of 1866, both of which were vetoed by President Andrew Johnson, and were only passed by Senate override of the Presidential veto.  During the trial of President Johnson in the Senate, Trumbull was one of the  few Senators who listened to the entire trial carefully.  He received physical threats, warning him not to vote against conviction of the President.

When the trial concluded and the matter came to a vote, Trumbull announced his decision in a lengthy speech, he stated that the House’s charges against President Johnson were “insufficient even for a case to be decided by a Justice of the Peace.”  Trumbull also filed a written statement, arguing that convicting Johnson would be a pure act of political power, “destructive of all law and all liberty worth the name, since liberty unregulated by law is but another name for anarchy.” Thankfully, in 1868 there were still men of honor like Senator Trumbull, who along with six other Republicans, denounced by their party as the “Seven Traitors,” voted to preserve our Constitution and acquitted President Johnson of all charges.

If the Democrats today are so “blinded by partisan zeal” as Senator Trumbull said of his fellow Republicans in 1868, that they will remove any obstacle, even the fundamental principles and protections of the very constitution they claim to serve,  to impeach President Trump without any violation of law, let us hope and pray that there are still men and women of honor in the Senate willing to stand for our constitution even if it means going against their own party and politics.