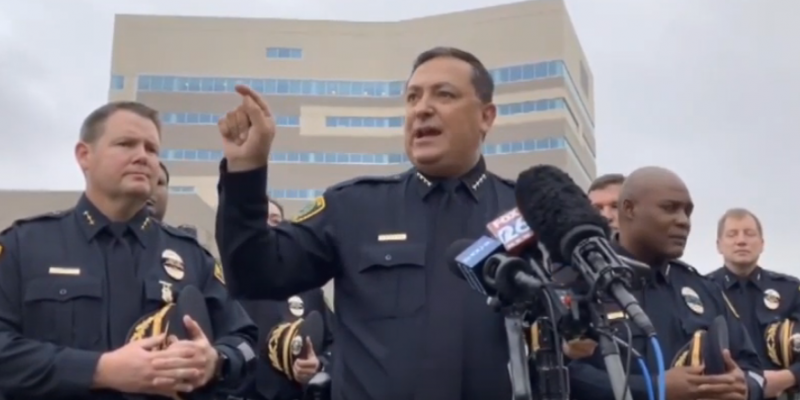 Houston Police Chief Art Acevedo clarified Tuesday that though his timing was off, everything else about his remarks on gun control following an officer death were completely justified.

On Monday, Acevedo indicated that U.S. Sens. John Cornyn and Ted Cruz are, in his estimation, reluctant to pass gun laws which he said would have prevented the first of two police officer deaths in a week. Acevedo, who has seen more than his share of officer-related attacks this year, went after not only Senators, but the National Rifle Association and apparently Republican Congressmen on his concerns that they refused to reauthorize the Violence Against Women Act.

Houston Police Sgt. Christopher Brewster was shot Saturday evening while responding to reports of domestic violence and confronting a suspect. The Houston police union called Acevedo’s reaction at a press conference “offensive and inappropriate” given the timing, which was just before Brewster’s body was escorted to the funeral home.

“The last few days have been very emotional for our department,” Acevedo said during a news conference Tuesday about arrests made in an anti-gang operation, via a report from KPRC-TV. “My emotions got the best of me yesterday. You know, I’m not sure it was the time, but I had a lot of anger and that anger is still here.”

Acevedo’s vitriol and volume made headlines for his attack on the National Rifle Association and the so-called “Boyfriend Loophole,” which seems to have stalled the re-authorization and retooling of the Violence against Women Act in the U.S. Senate.

“… The NRA does not like the fact that we want to take firearms out of the hands of boyfriends that abuse their girlfriends. And who killed our Sergeant? A boyfriend abusing his girlfriend. So you’re either here for women and children and our aunts, or you’re here for the NRA. So I don’t want to see their little smug faces about how much they [federal elected officials] care about law enforcement when I’m burying a sergeant because they don’t want to piss off the NRA.”

Acevedo added that boyfriends charged with domestic violence should not be able to purchase a firearm at sporting goods stores.

Watch his complete remarks below:

Federal law bans Americans from owning a firearm if they commit an act of domestic violence and their victim was a their spouse, a person they lived with, or a person with whom they share a child, the Texas Tribune explained in more detail. The loophole is that people in more casual relationships are not protected.

Texas law restores the right to own a gun after five years if a sentence is completed in full.

The Violence Against Women Act was passed in 1994 but expired in February. In addition to closing the Boyfriend Loophole, House Democrats expanded the bill to mention transgender victims and to allow Indian tribal courts to try non-tribe-members in domestic violence cases that occur on reservations. The Republican-led Senate was not having it, which led to Acevedo’s anger.

While neither Cornyn nor Cruz appear to have responded to the tantrum, Cornyn posted via Twitter “Late last week, Houston lost one of its finest. Today we honor Sgt. Christopher Brewster and remember him for his dedication and relentless positivity. Rest in peace and thank you for your service, Sergeant.”

A calmer Acevedo posted via social media today: “Today the men and women of the Houston Police Department will join Sergeant Christopher Brewster’s family and friends to celebrate the life of our fallen hero, and to honor his sacrifice. Please take a moment to pray for strength and comfort for all that know and love him.”