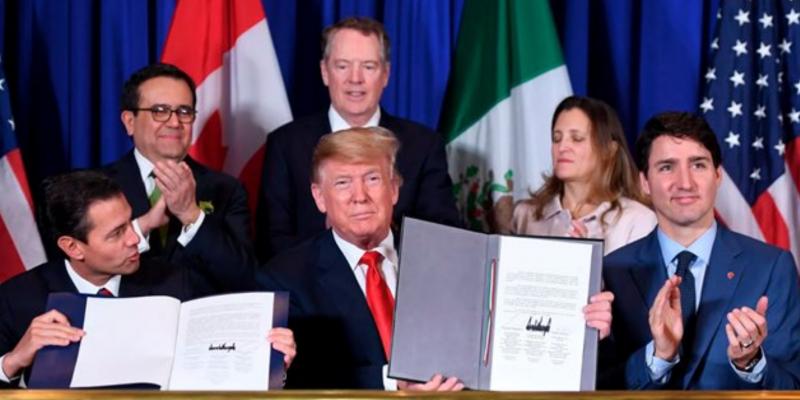 After more than a year of negotiations and many additional months of advocacy before legislators, the United States-Mexico-Canada Agreement (USMCA) still hasn’t been voted on by Congress. The leaders of Mexico, Canada and President Donald Trump signed the USMCA on Nov. 30, 2018.

Speaker of the House Nancy Pelosi has not scheduled a vote on the trade deal that would replace NAFTA despite having the bill on her desk for months.

U.S. Rep. John Carter, R-Texas, says waiting a year to sign the agreement is long enough. He’s urging Americans to contact their representatives to vote on the measure before the end of the year.

“Democrats have forced our nation into partisan political theatre and critical issues have taken a backseat,” Carter said. “We should be focusing on the USMCA, which will benefit Texas’ ranchers and cattlemen, securing their market access to Canada and Mexico to support exports.”

A congressional-executive agreement, the USMCA must be approved by a simple majority in both chambers of Congress. It must first pass the House before it can go to the Senate.

The Mexican government approved the deal in June, while Canada’s new parliament appears to be on track to approve it.

Pelosi, who pledged to schedule a vote this fall, recently suggested to reporters that the agreement may not come up for a vote before the end of the year. However, within the same remarks she also said, “I’d like to see us get it done this year, I mean, that would be my goal.”

“We don’t want NAFTA with sugar on top,” Pelosi told reporters, adding that the USMCA could be used as a “template for future trade agreements.”

This is a win for America, and Speaker Pelosi needs to make this a priority. We need the #USMCAnow. pic.twitter.com/jfzSlrSSP3

U.S. Rep. Marc Pocan, D-Wisconsin, told MSNBC that Trump was “waging a trade war against Wisconsin farmers resulting in more than 1,600 dairy farms closing,” and is “refusing to protect workers or enact environmental standards in the USMCA.”

U.S. Senator Ted Cruz, R-Texas, said he appreciates “the progress President Trump has made in ensuring our trade deals benefit American workers, ranchers, and farmers, and further strengthen our economy” but keeping one provision in the agreement would be a mistake.

Cruz sent a letter to U.S. Trade Representative Robert Lighthizer, urging him to remove language that would “enshrine” Section 230 of the Communications Decency Act in the USMCA and the U.S.-Japan trade agreements. Section 230 essentially provides internet and social media platforms liability protection for user-generated content.

“From Twitter locking the account of Senate Majority Leader Mitch McConnell’s campaign to YouTube de-monetizing a conservative comedian’s account following pressure from the left, the examples of censorship are as disturbing as they are numerous,” Cruz wrote. “That is why elected officials are increasingly advocating for Section 230’s revision or repeal. […] if this language remains in these trade agreements, elected officials will face a terrible dilemma: either abandon efforts to hold big tech companies accountable, or revise Section 230 and put the United States in breach.”

The U.S. Chamber of Commerce, which backs the USMCA, says it “is optimistic about the outlook for USMCA, but we aren’t taking anything for granted. We won’t let up in our advocacy until approval of this critical agreement is assured.”

Interested in more news from Texas? We've got you covered! See More Texas News
Previous Article Supreme Court hears first Second Amendment case in over a decade
Next Article It’s Crucial That Louisiana’s House Democrats Don’t Have A Say In Who Its Speaker Is