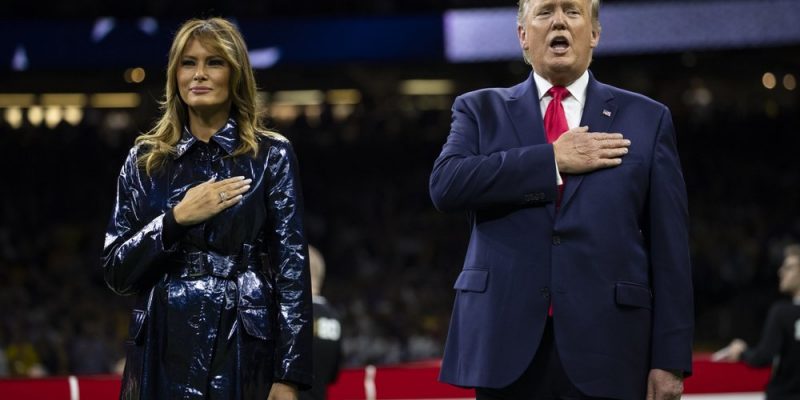 Several other VIPs joined the President including US Senator Lindsey Graham (R-SC), Congressman Steve Scalise (R-LA), Ralph Abraham (R-LA), and Mike Johnson (R-LA) who all rode to the game in style aboard Air Force One with President Trump.

Check out this clip that President Trump shared:

Amazing – so much energy!

Louisiana’s own Lauren Daigle did the honors of singing our National Anthem, The Star Spangled Banner, in beautiful fashion:

Actor Vince Vaughn was also at the game, shaking the President’s hand in this video that has since gone viral:

LSU bought home their fourth National Title in school history by defeating the Clemson Tigers 42 to 25 and securing their place in history with an undefeated 15-0 record. Quarterback Joe Burrow once again led them to victory, throwing for 5 touchdowns and nearly 500 yards.

Burrow, the 2019 Heisman Trophy Winner, put on another dazzling performance after throwing for 5 touchdowns and nearly 500 yards and breaking the all-time College Football record with 61 passing touchdowns on the season. The previous record was 58.

Interested in more national news? We've got you covered! See More National News
Previous Article This Was The Greatest College Football Team Of All Time
Next Article OWEN: Why Not Louisiana? Why Not, Louisiana? (Part 1)