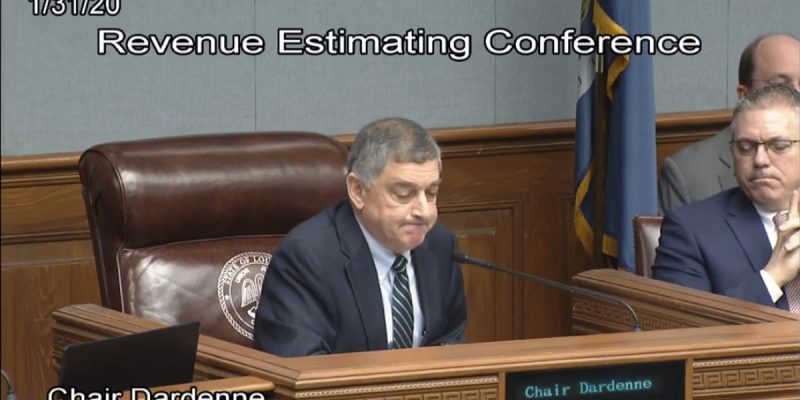 Our readers mostly know what the REC, or Revenue Estimating Conference, is and does within Louisiana government. The REC, made up of the governor, Speaker of the House, Senate President and a designated state economist, who in September was identified as UL-Lafayette economist Stephen Barnes, gets together periodically to set the state’s official estimate for its revenues among the various sources therefrom.

Typically speaking, the REC’s meetings are perfunctory affairs in which the governor’s designate, which is almost always the Commissioner of Administration (currently long-time moderate Republican politician Jay Dardenne, who would like very much to be offered a cushy job as the LSU system president), announces that the state has “X” amount of revenue to spend, or must contend with “Y” revenue shortfall. Since John Bel Edwards’ inauguration in 2016 and the massive tax increases he demanded and received, Louisiana’s tax revenues have generated a sizable surplus again and again while the state’s private-sector economy lags badly behind the rest of the nation.

In the last couple of years, REC meetings have taken on a bit of drama, as the House Speaker has chosen to hold the line on revenue estimates as a means of denying Edwards the ability to apply surplus monies to the state’s recurring budget. Then-Speaker Taylor Barras frequently deputized then-House Appropriations Chair Cameron Henry to object to the REC forecasts and therefore force Edwards to tighten his belt – or at least not gorge on quite as much taxpayer loot.

Friday’s REC meeting wasn’t perfunctory (video of it here), because on Friday the new leadership of the Louisiana legislature, namely, Senate President Page Cortez and House Speaker Clay Schexnayder, had their first meeting.

There was a bit of uncertainty as to how Cortez and Schexnayder would handle the current REC forecast. Republicans on the House side had been relatively adamant about continuing to object to the REC forecast increases, for the same reason Barras and Henry had. Schexnayder, who earned his speakership partly because of a bloc vote from Democrats whipped by Edwards, was a particular question mark – would Edwards have leverage enough to convince Schexnayder to ignore the majority of his delegation?

A letter asking him not to listen to the governor had circulated, emanating from House Republican Delegation chair Blake Miguez… 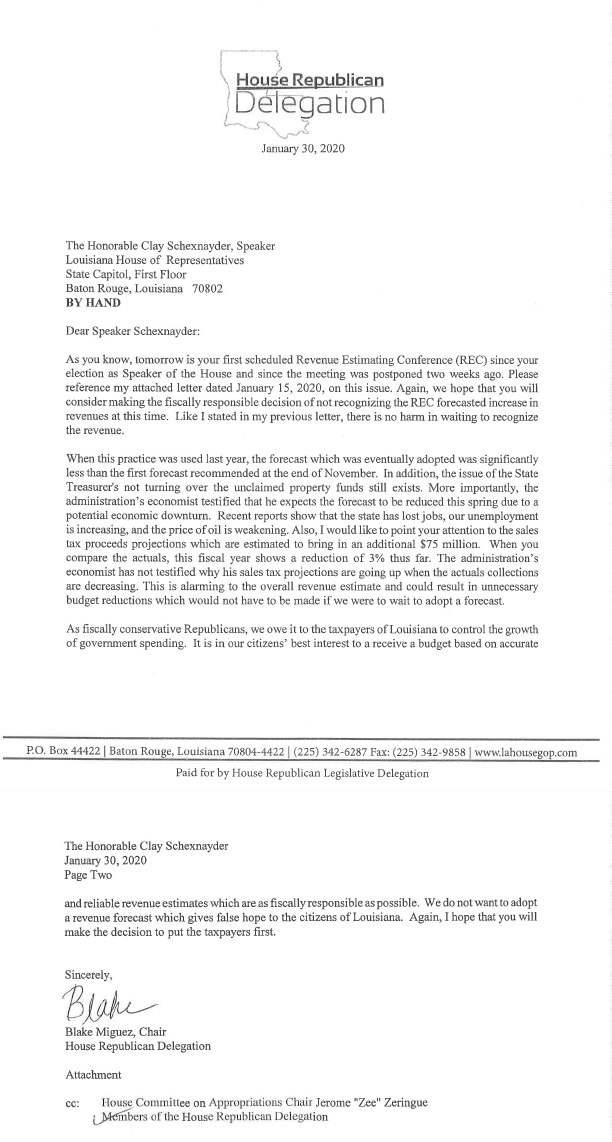 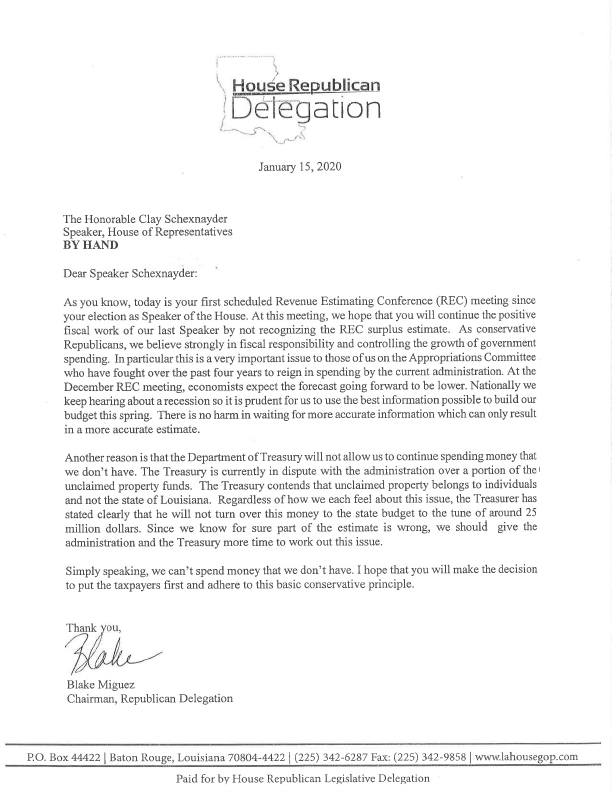 There had been some discussion that the major sea change in the Louisiana Senate, which now has 27 Republicans out of 39 and is run by Cortez rather than Edwards’ old term-limited lickspittle John Alario, would bolster an “obstructionist” House.

Dardenne went into the meeting touting projections which said that Louisiana would have some $170 million in excess tax collections, but he said he planned on including in the state’s projected take, and in the budget he would present to the legislature, some $25 million in cash sitting in the state’s unclaimed property fund. Treasurer John Schroder has said repeatedly that he’s not giving that money to the state general fund because it’s not the state’s money; it belongs to the people who own it. Dardenne said he was considering suing Schroder for the money, since he says it’s the legislature’s job to appropriate money and not the Treasurer’s.

Except the legislature gets to appropriate state money, and the unclaimed property fund is money which belongs to individual people and not the state.

That ended up being a point of concern at the meeting.

Cortez bristled at the idea of including the unclaimed property fund in the state budget. He said he didn’t know whether Dardenne or Schroder were correct in that argument, but he didn’t think it was a good idea to bank on that money and he suggested the money essentially be escrowed until some resolution of the dispute is made.

Dardenne argued his case with Cortez, launching into a harangue to the effect that Schroder isn’t a member of the REC and has no authority to affect its forecasts.

Dardenne’s threats to sue Schroder didn’t meet with a very positive response, as the Treasurer slapped back at the Commissioner of Administration on Saturday…

Cortez said he just wanted to get on the record objecting to using the unclaimed property money.

And then Schexnayder proposed recognizing about $100 million in revenue, not $170 million. He said he wanted to adopt a conservative estimate, and this would be a compromise along those lines.

Both Schexnayder and Cortez expressed concerns about the numbers proposed by nonpartisan legislative and administrative economists that Commissioner of Administration Jay Dardenne, the governor’s chief budget adviser, wanted to use. Schexnayder proposed a significantly smaller set of increases to the forecast, calling it a way to keep “some conservative in the forecast.”

“I think we’re trying to find a sweet spot,” said Schexnayder, of Ascension Parish. “No one gets everything they wanted, but we all get a little something.”

Schexnayder was backed by Cortez, who called it a “reasonable middle ground” offer. But Dardenne refused, saying the estimates the House speaker proposed weren’t crafted based on economists’ advice.

“It’s arbitrary,” Dardenne said. He added that the panel “may as well not have our economists,” if it won’t listen to their guidance.

Dardenne backed a proposal that would have given the state another $170 million to spend in the current budget year and another $103 million to spend next year, the smaller of two forecast hikes proposed by economists that advise the conference. Schexnayder recommended raising this year’s forecast by $94 million and next year’s projections by $400,000, striking out the sales tax increases included in the economist’s estimate.

Dardenne threw a fit about that, challenging Schexnayder’s mechanics in calculating his $100 million, and proceeded to scold Schexnayder for his math and lack of understanding of how the budget worked. He told Schexnayder to file a bill to change the constitution if he didn’t like how the REC works, and went on to bloviate about the “long-standing process” of the REC – knowing, of course, that the REC is constantly wrong in its revenue projections.

Cortez backed Schexnayder and said the math in his proposal was reasonable and thought his motion for a compromise was valid.

Since all motions at the REC have to be unanimous, Dardenne objected – and then began touting the fact that if the REC lowered its forecast it would affect a bunch of statutory dedications for things like health care, tourism promotion and so forth.

Barnes voted with Schexnayder and Cortez on the substitute motion, and he did the same thing when Cortez reiterated the proposal on his own motion. Dardenne objected, and was on his own on a 3-1 vote though that was enough to block it. And then Dardenne threatened to bring out his usual Parade of Horrors as to what $100 million in money he’d have to cut from the budget would look like, before adjourning the meeting.

Jay Dardenne has looked like a jackass a great deal over the last four years, but this might have been the pinnacle of his jackassery. It wasn’t well-received by members of the legislature at all.

With our economists $100M apart on revenue forecast, President Cortez & Speaker @SchexnayderClay offered to split the difference for purpose of building budget. Dardenne said no. Why not compromise & play it safe? #LaLege 🇺🇸 https://t.co/Xqy3Y8PnKZ

Thank you Speaker @SchexnayderClay and President @ppcpage for putting the citizens of LA first by attempting to adopt a more conservative forecast in an effort to began building a fiscally responsible legislative budget. First signs of a unified independent legislature! #lalege https://t.co/Pm1Df02C3R

So the stage is set this week for a Jay Dardenne dog and pony show threatening all kinds of draconian and horrific cuts to the state budget, with the usual threats to toss seniors from nursing homes and kill college football and the like, because the biggest budget in Louisiana history wasn’t added to.

None of that is new or interesting. But what is, and it’s significant of a potential new era in Louisiana politics, is Schexnayder and Cortez were together in opposing Dardenne and the governor.

Between a better-than-expected roster of committee assignments in the House money committees and the REC opposition, it’s starting to look like Schexnayder was a bad bet for Edwards even despite the concerns of conservatives. And that augurs very poorly for the governor’s second term.


Interested in more news from Louisiana? We've got you covered! See More Louisiana News
Previous Article Plano, Arlington, Texas among most fiscally sound cities in U.S.; Houston, Fort Worth among worst
Next Article Don’t Forget To Grab Your Tickets For The Hayride’s Feb. 27 Covington Event!