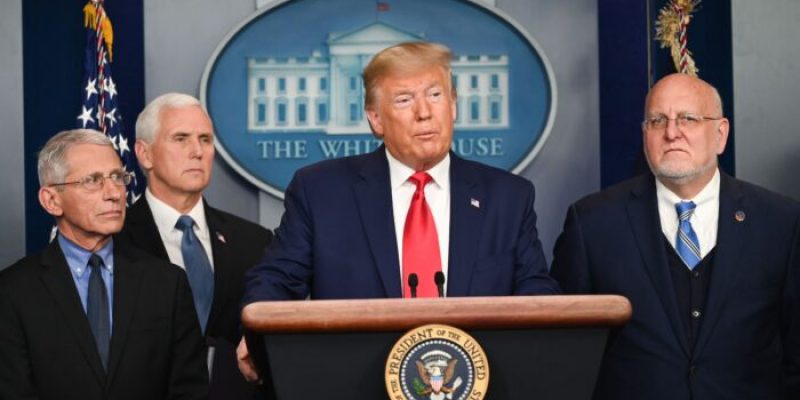 President Trump and Vice President Mike Pence led a press briefing Saturday afternoon, providing an update on coronavirus and announcing the signing of a peace deal in Afghanistan after 19 years of war.

The President announced the first American death from coronavirus in Washington State. However, the administration emphasized repeatedly that, “The risk to Americans remains low.”

President Trump pointed out that his administration closed off all travel from mainland China on January 31, a move he says was questioned by his critics but proved to be critical to protect Americans.

Vice President Mike Pence told the press that the average American does not need to buy masks. He praised the President for his decisive action in closing off the borders to China and visitors to China saying,

“President Donald Trump took the unprecedented action to suspend all travel into the United States from China. Simply had never been done before by any previous administration. It is one of the reasons that the threat to Americans of coronavirus remains low.”

The administration announced that a travel ban will be temporarily placed on Iran while the travel advisory for Italy and South Korea will be raised to the highest possible level.

The President took questions from the press with two reporters asking what the President called a “very dishonest question”, questioning the President’s use of the word “hoax” relating to Democrats’ recent attempts to brand the health crisis as “Trumpvirus”.

President Trump also announced the signing of a new peace agreement between US forces and the Taliban in Afghanistan which paves the way to total troop withdrawal by mid-year 2021.

The President reflected on the immense cost of the nearly two-decades long war, thanking America’s gold star families and wounded warriors adding that,

“We just signed an agreement that puts us in a position to get it done… I’ll be meeting personally with Taliban leaders in the not-too-distant future… It’s time… to bring our people back home.”

The deal is said to have been more than a year in the making with talks which took place in Doha, Qatar starting and stopping repeatedly.

The war in Afghanistan has cost the United States over $1 trillion dollars and the even greater cost of nearly 2,500 American military service members.