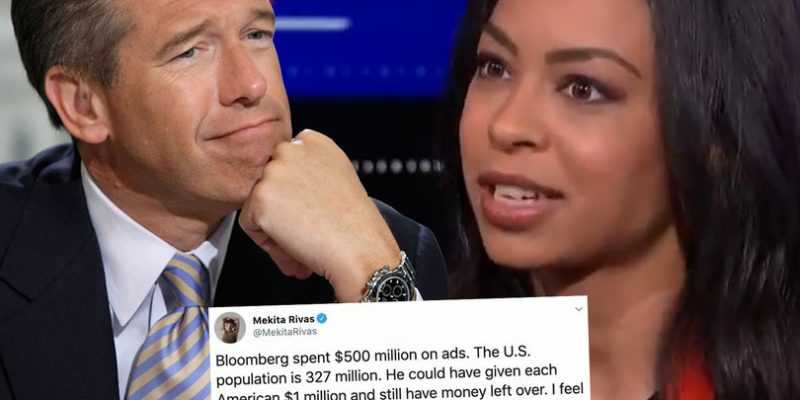 An MSNBC clip went viral for all the wrong reasons on Friday after host Brian Williams repeated the inaccurate claim that former presidential candidate Mike Bloomberg could have given every American $1 million with the amount he spent on his 2020 bid for President.

That would have been true – if there were only 500 people in the whole country! Instead, the truth is that the $500 million would only be enough for each American to receive $1.53.

The tweet that kicked off the media giant’s shocking display of incompetence was published by a woman named Mekita Rivas who opined,

“Bloomberg spent $500 million on ads. The US population is 327 million. He could have given each American $1 million and still have money left over. I feel like a $1 million check would be life-changing for most people. Yet he wasted it all on ads and STILL LOST.”

We get it, everyone makes mistakes when it comes to math. What is shocking is not just that MSNBC retweeted the claim but that host Brian Williams made it part of his show saying, “When I read it tonight on social media, it kind of all suddenly became clear.”

Williams and his co-host, New York Times editorial board member Mara Gay, both marveled at the prospect with Gay saying,

“It is an incredible way of putting it. It’s true, it’s disturbing. It does suggest, you know, what we’re talking about here which is that there is too much money in politics”.

I mean, how many people did that have to go through to get to that point? On top of the obvious three, it had to go through at least a couple MSNBC staff members. The moral of the story? If the media will rush to state something as fact largely because it fits their political narrative, what less obvious facts do they get wrong on a regular basis?

And contrary to Mara Gay’s point – Bloomberg’s epic failure of a campaign actually proved to Americans that even the biggest sums of cash cannot buy an election, at least the presidency.

See the clip for yourself below:

Watch MSNBC anchor Brian Williams' jaw-dropping math fail live on the air that people can't stop watching. If you had any faith left in the media, you might not have any after this…