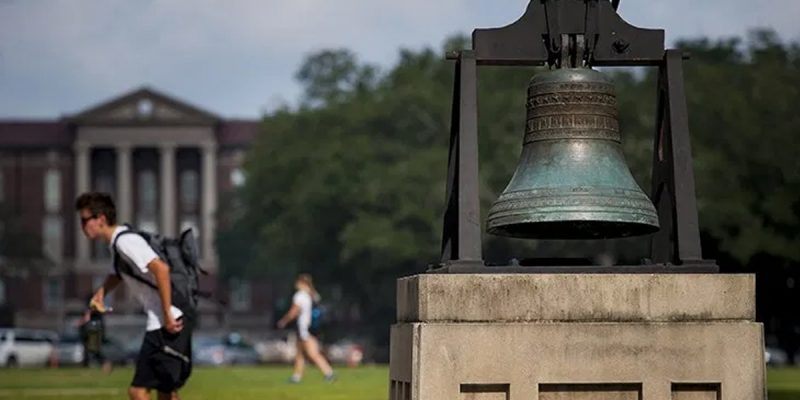 In a move that showcases how unserious and ridiculous Tulane’s out-of-state president can act, Tulane University removed its Victory Bell from campus due to, as school officials explained, it being an “instrument of slavery.” Doug Hertz and Mike Fitts wrote six paragraphs to virtue signal that in 2020, Tulane does not condone or sympathize with slavery. Of course no one advocates that slavery should still exist, but that doesn’t keep Fitts and his ilk from pandering for P.R. points at the altar of supposed oppression. The email draws several thoughts, but cutting to it, it’s sad, pathetic, and frail-minded.

In 2015, we formed the Presidential Commission on Race and Tulane Values with the goal of fostering an environment in which respect, inclusion and human dignity are embraced by all members of our campus community.

In light of our efforts to advance inclusivity and raise our cultural consciousness, we were deeply saddened to learn last week that the university’s Victory Bell, forged in 1825, was originally a plantation bell. Plantation bells were used to direct the movements of enslaved Africans throughout their day.

Our historical archives confirmed the origins of the bell and that the bell came to Tulane in 1960-61. For decades it was rung to celebrate Tulane basketball victories. In 2011, the bell was installed in front of McAlister Auditorium. Hands touched and hearts embraced what had become a symbol of the Tulane spirit. It is terribly disheartening to learn that it is, in fact, a vestige of a horrific part of our nation’s past. Now that we understand its history as an instrument of slavery, continuing to use this bell in a celebratory manner would run counter to our values as a university community.

Earlier today, we moved the bell to storage while we continue to conduct an in-depth investigation of its exact origins. As an academic institution, we believe it is important to find a way to use this bell to further our knowledge and understanding of slavery and pursue a more just society.

We have also moved to form a special committee comprised of board members, students, faculty, alumni and staff to recommend what should replace the Victory Bell in the central location in front of McAlister Auditorium. In doing so, we hope to establish a new tradition that truly represents a victory for all.

Although we have made real progress in building a university that better reflects our community and our highest values, the bell’s newly discovered past is a powerful reminder that the most tragic and painful elements of our nation’s history continue to echo through our communities. It is also a reminder that we must be ever vigilant, ever humble and ever open to examining our own beliefs and practices as we continue to foster a more inclusive community.

Doug Hertz
Chair, Board of Tulane

It’s all so ridiculous it can’t be taken seriously by anyone with any common sense. After reading that letter, it’s difficult to imagine having a rational discussion with these so called leaders. Realistically, Tulane is a university for wealthy elitists who champion silly liberal ideologies to make themselves feel less bourgeoisie. But the Victory Bell removal is too much.

The Victory Bell was a uniting landmark that enhanced the Tulane experience. But then, someone said it was on a plantation. The bell caused no issues, it didn’t affect anyone’s existence, until Tulane’s leaders empowered it by telling people it was bad. These goofball educators undoubtedly know the land their school encompasses was part of the de Bore and Foucher Plantation. Hertz and Fittz should appropriately be seeking a new location for Tulane, this time on non-slave worked land. But the modifications to reach their utopic fantasy has more complications.

Pretend Tulane’s stance makes sense, then realize the school was named for Paul Tulane, New Orleans’ largest benefactor of the short lived Southern country known as the Confederate States of America. And spoiler alert, Tulane was from New Jersey and although he split time between his homes in Louisiana and New Jersey, Tulane staunchly supported States Rights, er, the Confederacy. After the war ended, Tulane donated generously to memorialize Southern veterans of the War Between The States with war monuments. If Tulane were serious about its nonsensical position, it would apply the Victory Bell standards universally and rename Tulane University. Changing the name should also mean that the University would give the $363,000 Paul Tulane gifted in 1882 back to his family, in contemporary dollars, probably with interest from the last 138 years.

Take the Tulane leadership’s position a step farther into the twilight zone. Isn’t the position of President of Tulane University a hierarchical role, and that–by nature–perpetuates inequality. Which means the position would have to be liquidated in the name of equality and inclusiveness. The president’s mansion on private Audubon Place is the height of privilege and exclusivity almost fitting as a monarch’s realm. Samuel Zemurray’s family donated the home to the University, and the fruit baron made a fortune in the banana business partly by invading Honduras and overthrowing its government for his own gain. The obvious progressive move would be for Tulane to sell the house and gift the money to the people of Honduras.

To recap, Tulane University would need to relocate, rename the university, sell the president’s mansion, and it would be a nice touch for the president to relocate his residence to Monroe Hall to show solidarity and an equal relationship with all of Tulane’s diverse student body. That agenda would keep Tulane’s leaders on track with their stated quest to foster an environment of “respect, inclusion and human dignity.” Anything less would be inconsistent and prove the leadership to be frauds.

The University could have chosen a wiser, more mature course instead of drastic changes and removing a campus landmark enjoyed by students for 70 years. A contextual plaque would more than suffice as well as educate future generations on the true history of New Orleans. As an institute of higher learning Tulane chose the sycophantic route showing itself to be low level minds.

This is a good situation to remind people to reconsider significant donations because you will eventually be vilified by future generations.

It’s “year zero” anytime sensibilities change with this approach.  Fitts is old enough and grew up in a decent enough country to know better. By enabling this, he is laying a foundation for students to graduate from an institution that makes the ever changing status quo the only thing worth adhering to. The key to all of this is that placating this absurdity won’t cause it to stop and the radicals won’t ever be happy; they will keep clamoring for even more bizarre things once they get what they want.