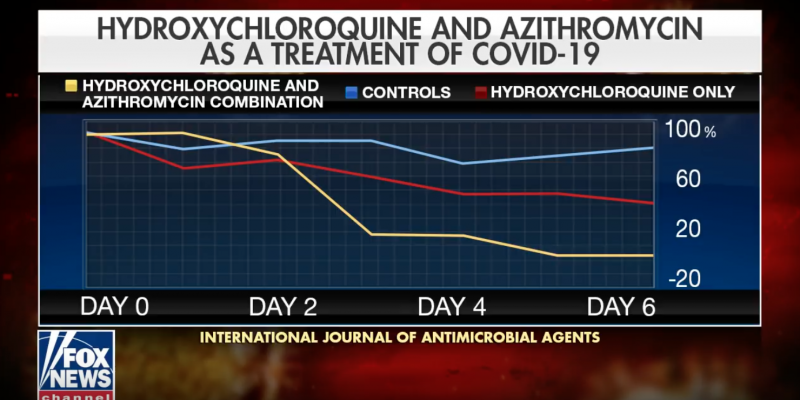 Hydroxychloroquine, an old medicine commonly used to treat malaria, is showing very promising signs in the fight against the Chinese coronavirus known as Covid-19.

The mainstream media appear to be rooting against the development as part of their endless opposition to President Trump. The New York Times even published an article with the headline, “Trump’s Embrace of Unproven Drugs to Treat Coronavirus Defies Science”.

The scourge of “Trump Derangement Syndrome” seems worse than ever as some liberal media outlets can’t even find the decency to check their hatred at the door when it comes to an international health crisis.

Their opposition to the two drugs in question probably began the day President Trump became one of the first to deliver the good news to the American people tweeting Saturday,

“HYDROXYCHLOROQUINE & AZITHROMYCIN, taken together, have a real chance to be one of the biggest game changers in the history of medicine. The FDA has moved mountains – Thank You! Hopefully they will BOTH (H works better with A, International Journal of Antimicrobial Agents)…..be put in use IMMEDIATELY. PEOPLE ARE DYING, MOVE FAST, and GOD BLESS EVERYONE!”

Fox News’ Laura Ingraham took a look at a French study which serves as confirmation of the drugs’ combined effectiveness due to showing as much as a 100% reduction in patients’ recovery time.

Joining the Laura Ingraham Show was Dr. William Grace of Lenox Hill Hospital in New York City where he says the medical cocktail is already being used in extreme cases of covid-19 saying,

“Everybody’s using it now off-label. We have a surge of coronavirus-19 patients throughout the metropolitan area of New York. And the problem is these patients are coming in quite sick. And when they get to a very difficult respiratory status, doctors are using hydroxychloroquine with or without a drug called Zithromax or azithromycin. And that’s showing tremendous activity, and we have not had a death in our hospital. We have probably close to 100 patients and not had any deaths. In the trenches, we’re all using it especially for desperately ill people…. We’re not using it on everybody, but we’re using it on those people who show major respiratory compromise…”

Several U.S. States have begun taking notice with New York beginning it’s own clinical trials and The Louisiana Board of Pharmacy implementing new rules in the hopes of avoiding a shortage.

Israel’s pharma-giant Teva has reportedly announced they will donate 10 million doses of hydroxychloroquine to US hospitals by March 31. Bayer will also be donating 3 million doses.

Interested in more national news? We've got you covered! See More National News
Previous Article Democrats: Shelter-In-Place For Thee, Not Me
Next Article JOHNSON: Lord, Give Us Wisdom