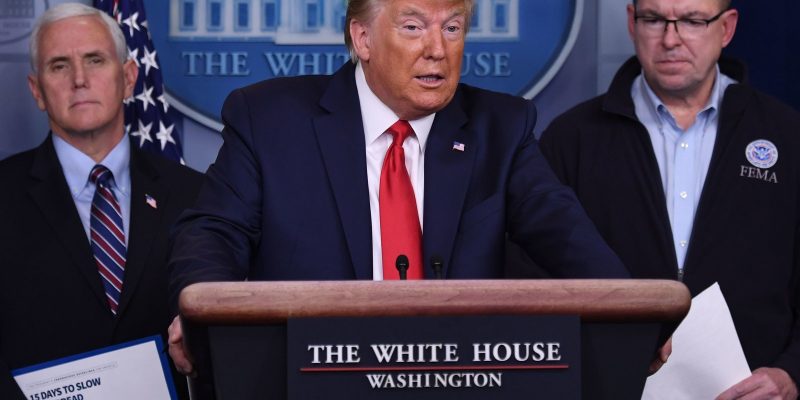 Ever since the coronavirus became a household word and the American people started to worry about its tremendous impact, President Donald Trump and his task force have held daily media briefings. At these events, the President will usually make an announcement and then introduce members of his team who have important information to share with the American people. It is quite helpful to hear from these tireless public servants who are working day and night to save the lives of countless Americans.

What is not helpful is the question and answer session from the media that follows the opening remarks. Inevitably, liberal reporters will play “gotcha” games with the President and his task force. The goal is to embarrass the President and his administration rather than to provide any useful facts to the American people.

In recent days, reporters have been hyperventilating about the President’s use of the term “Chinese virus,” to describe this health threat. They are insistent that it is a racist term, forgetting that epidemics are often given a title that reflects where the disease originated. For example, the “Asian flu” pandemic of 1957-58 originated in China, the pandemic of 1968 was called the “Hong Kong” flu and the virus which began in 1937 in Uganda was called “West Nile” after the region from which it started.

In this pandemic, reporters seem to be more interested in political correctness than in providing important life-saving information to the American people. What the President has stated repeatedly is that identifying the “Chinese” origins of the flu is not racist, but very important, because state media sources in the communist country have been trying to publicize the lie that the United States military planted the virus in China.

Of course, the communist dictators are trying to evade responsibility for not only the origins of the virus, but also their incompetence in stopping the spread of the disease. From the beginning of this crisis, Chinese leaders have used draconian media censorship to prevent the world from knowing about the existence and dangers of the coronavirus.

While some of the liberal reporters have been blasting the President for his choice of words in describing the coronavirus, others have been claiming that he is being too optimistic with the American people. On Friday, in his news conference, the President tangled with Peter Alexander of NBC News. He claimed that the President was trying to put a positive spin on the news that a drug used to treat Malaria, Chloroquine, may be useful in treating coronavirus.

In essence, Alexander claimed that the President was giving Americans false hope. He said, “What do you say to Americans who are watching you right now who are scared?” The President replied by telling Alexander, “you’re a terrible reporter…The American people are looking for answers and they’re looking for hope, and you’re doing sensationalism.”

Hooray for the curt response that President Trump gave Alexander and many of the other reporters over the last few days. Alexander is typical of almost all the reporters at the daily press briefings. Most of them are liberals who work for liberal news agencies. They have an agenda, which is, first and foremost, to inflict political damage on President Trump.

The left-wing media are so offended that the President has told the truth, many are now calling for a boycott of his briefings. A columnist for The Washington Post, Margaret Sullivan, tweeted that “The media must stop live-broadcasting Trump’s dangerous, destructive coronavirus briefings.”

Going forward, it would be a better idea for the President to hold these important briefings without the media. The sessions would be shorter, the task force could spend more time on important matters and the American people would not be subjected to unfair reporters trying to score political points on the President of the United States.

This inappropriate behavior was apparent from the very beginning of the Trump administration. This media behavior has been harmful to our country, but, in the crisis today, it is even more damaging. Allowing biased reporters to ask questions is certainly not serving any sort of purpose, other than to badger the President and the members of his task force. It is time to end the charade.