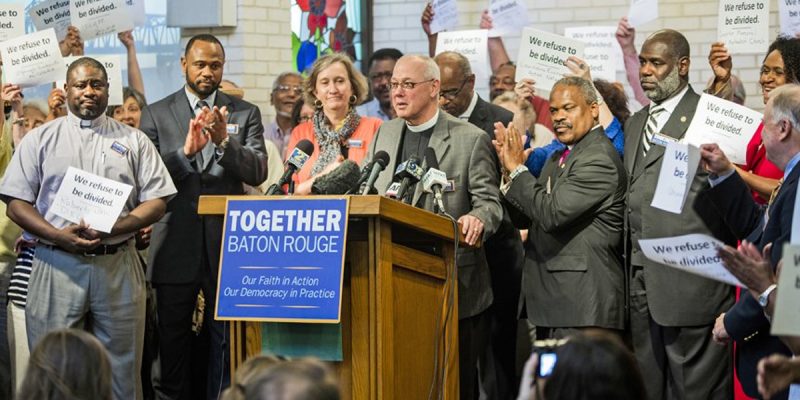 If you give them the opportunity, they’ll show you who they are, and the Marxists at Together Baton Rouge happily complied with illustrating that old maxim yesterday by triumphantly releasing a “study” claiming that their advocacy in killing incentives for projects covered by the state’s Industrial Tax Exemption Program has resulted in a windfall of local taxation.

The East Baton Rouge Parish School Board and parish taxing authorities received a total of $10.5 million in new annual revenue thanks to changes to the state’s Industrial Tax Exemption Program, Together Baton Rouge leaders claim in a new study released Tuesday.

The faith-based advocacy group’s research of property tax records for industrial businesses from 2016 to 2019 also estimates the parish could receive up to $21.5 million in total new revenue by 2021 if those stricter guidelines for tax exemptions were to remain intact.

Together Baton Rouge released its report a day before the East Baton Rouge Parish Metro Council is set to revisit the guidelines council members adopted in 2018 outlining how they would approve tax breaks for industrial projects.

Those guidelines, which Together Baton Rouge leaders had a hand in crafting, followed a 2016 executive order from Gov. John Bel Edwards which, for the first time, gave local taxing authorities more say-so over which companies were granted tax breaks.

And what has come from this great boon to the people of Baton Rouge? Well…

Baton Rouge has seen the job market increase by 1.3% over the last year. Future job growth over the next ten years is predicted to be 24.4%, which is lower than the US average of 33.5%.

That isn’t solely attributable to killing ITEP incentives, obviously, but it’s a good indication the private sector is awfully weak around here.

And the attacks on ITEP sure haven’t helped. Construction employment in Baton Rouge dropped off the table last year…

Louisiana has lost 7,000 construction jobs over the past 12 months, according to seasonally adjusted data released today by the Associated General Contractors of America, reflecting a 4.8% decline in construction employment throughout 2019.

The steep jobs decline caused Louisiana to rank 48th among all states and Washington, D.C., in terms of construction employment over the 12-month period, with the state outperforming only Connecticut (-5.5%), West Virginia (-7.2%) and Wyoming (-9.5%).

Additionally, the 7,000 jobs lost was second highest in the country, after Ohio, which lost 9,000. Overall, Louisiana was among 16 states to lose construction jobs in 2019.

Louisiana has been steadily losing construction jobs each month. Between October and December, Louisiana lost 500 jobs.

The latest figures come as construction employment has increased in 34 states and Washington, D.C., over the past 12 months, while 29 states added construction jobs in December.

What’s more, we’re told by folks in the industry that as now now, beginning in 2022 there isn’t a single major industrial construction project planned in Louisiana. Not one. This after the better part of $200 billion has been spent in the past decade on industrial construction in Louisiana, mostly using ITEP incentives to get large companies to site facilities in this state. That boom has completely dried up, which means the employment it generated will all be heading elsewhere.

And the Together Baton Rouge commies are actually celebrating what they’ve done, because they managed to milk $3 million a year and change out of the state’s industrial sector to give to the bloated local government.

Even if their numbers are correct, $10.5 million cut 7,000 ways gives you $1,500 per job you’ve killed over those three years. Does that sound like a good investment considering those 7,000 people will be taking their skills, taxable income and discretionary consumer dollars to places like Texas, Tennessee and Florida? They’ll be gone a lot longer than three years.

We are ruled by morons, and we wonder why we aren’t competitive. Private companies don’t want to do business in this state because nobody in a position of power in Louisiana understands how to make a payroll, grow a business, or create and sell a product. What they know how to do is to steal other people’s money in creative ways – or in uncreative ways.

We say this all the time, but when you treat capital as prey, it will respond as prey. It will flee. This state’s political class, influenced by Alinskyite trash like Together Baton Rouge, treats capital as prey. Don’t be shocked at the results.