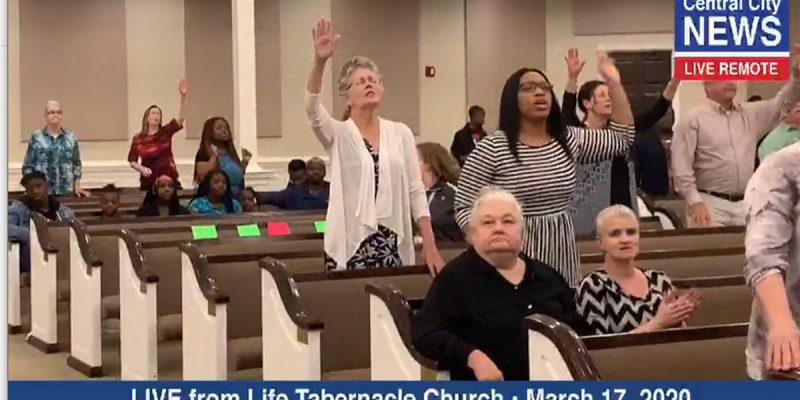 Fifteen years ago this August 27th the Archdiocese of New Orleans did a very peculiar thing in choosing how to tend to the flock.

It was a Saturday afternoon as Hurricane Katrina was churning in the Gulf of Mexico heading for the Louisiana coastline.

Yet for area Catholic Churches, it was surreally business as usual as no instructions were given to close churches for the weekend.

Roman Catholic Churches have something called Vigil Mass that is typically held on Saturday at 4:00 PM.  The Mass is particularly popular with older parishioners and attending it would fulfill your Sunday obligation.

But without direction from Walmsley and Carrollton (the intersection in New Orleans where the archbishop resides), many churches went forward with not just their Saturday Vigil Mass but some of their Sunday celebrations as well (especially newly ordained priests who didn’t want to be seen shirking their vows so early into their ministry).

Amazingly enough despite the approaching storm people still went to church on Saturday afternoon or Sunday morning rather than using that time to evacuate.

I thought it was an administrative error of incredible proportions and when I had an opportunity to ask why Mass had not been cancelled Katrina weekend and a dispensation given to area Catholics, I was told that a dispensation would have been unnecessary as area Catholics could have gone to Mass some place else.

I was dumbstruck. Someone apparently didn’t comprehend the overall point of public safety.

Fortunately the archdiocese put further thought into the matter and in 2008 when New Orleans was threatened by another powerful storm, the order to scrub Mass went out and a general dispensation was issued to relieve evacuees of their Sunday obligation. The Church would protect its flock in a more earthly manner.

When the various closings related to the Coronavirus began to fall like dominoes, I assumed that it was only a matter of time before the Catholic Church suspended in-person Mass.

I made a point of attending a Sunday evening Mass on March 14th figuring it would be the last  time I would attend a public Mass for a while.

The church was largely empty and the flock was spaced out across the pews. The pastor was upbeat about things and ran through a list of activities they were planning while mentioning that they were working on broadcasting Mass on the internet just in case.

Well “just in case” was sooner than later as churches were announcing the indefinite postponement of public Mass until the health crisis cleared up.

Now I take my faith and religious obligations very seriously and before I travel anywhere I look up nearby churches and their Mass schedules.  I’ve attended Mass in 48 states and half as many countries.

I can’t remember the last time I missed a Holy Day of Obligation unrelated to illness or an unworkable schedule, though I’m sure it’s been within the past five years.

Yet I completely understood the situation and applaud the Catholic leadership’s decision to forgo in-person Mass and instead broadcast church parish Mass on social media. The flock has gone electronic, at least for now.

Plenty were perturbed by this call and while I understand the mindset that they’re willing to accept the risk of potentially contracting this deadly and easily spread virus, the individuals they might encounter incidentally would be less willing to share their spirit of self-sacrifice if they were to become ill.

And what of the high risk crowd who would show up to church? While they might tell themselves they’re prepared to die to receive Communion, their children and grandchildren probably aren’t.

One priest told me that cancelling Mass has had a decidedly hard effect on operations though he does not for one second regret holding off.

What’s happening here isn’t the same church-closing situation you had under the Communists in Eastern Europe or during the Cristeros War in Mexico. Those churches were violently suppressed and the people who risked their lives for their faith in those instances were true Martyrs.

In this case going to church and exposing yourself (and tangentially others) would constitute an act of reckless pride. If your number gets called, there will be no beatification in the cards.

And while I am not a Biblical scholar I am pretty certain that unwittingly spreading COVID-19 in His Name is not a virtue.

Which brings us to Pastor Tony Spell and his Life Tabernacle Church near Baton Rouge.

The preacher and his congregation have made international news for defying Governor John Bel Edwards’s order prohibiting gatherings of more than 50 people, as Spell’s Sunday crowds number around 1200.  And Spell’s service is drawing folks far from outside the vicinity of his church.

Thus far Spell has been slapped with six misdemeanors though he refused to comply with the order, declaring the directive political and further dismissing the risk of death as something true Christians dismiss as irrelevant.

Spell’s refusal has further fed the irreligious voices in society who seek to exploit his poor example to tar all people of faith.

Further, the situation has generated a great deal of acrimonious chatter that is not a good reflection upon civil society, including calls such as “Lock ’em all up!” and “I hope every one of them gets sick!”.

Despite my strong objections to Spell the thought of arresting people for going to church, even during a pandemic, is anathema to America.

And wishing this deadly sickness upon anyone no matter how misguided they may be on this matter is inhumane.

When Tony Spell breathes his last he will be summoned before someone more formidable than the district attorney or the governor.

And the Pentecostal preacher will have to explain himself and settle accounts for anyone who has been harmed by his stubbornness, negligence, arrogance, or pride (pending on your read of what truly motivates Spell).

Thousands of ministers across our state have wisely chosen to not put God to the test and are tending to the spiritual needs of their parishioners and congregants through innovative means unimaginable and unavailable a decade ago.

Rather than curse the darkness, we should light a candle by expressing gratitude for our ministers who have gone above and beyond to responsibly and safely serve their people.

Interested in more news from Louisiana? We've got you covered! See More Louisiana News
Previous Article LIVING THE STORY: Bishop Suggests New Way to Enter into Easter Miracle
Next Article At What Point Are We Allowed To Ask Whether JBE Likes This Shutdown?