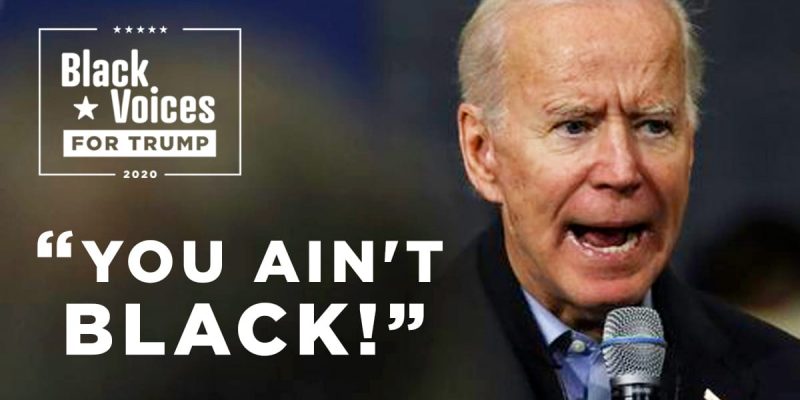 Things just keep getting worse for presumptive Democrat presidential nominee Joe Biden who is still reeling from the fallout of making what many say was a racist statement last week during an interview on “The Breakfast Club” with host “Charlamagne tha God.”

Toward the end of the fifteen minute interview Biden says, “If you’re having trouble figuring out if you’re for me or Trump, then you ain’t black.”

The controversial statement set the internet on fire, see it for yourself below:

The Breakfast Club’s Twitter account posted a poll asking followers what they thought about Biden’s comments and the overwhelming results spell disaster for Democrats.

The Trump campaign initially responded to the controversy saying,

“Joe Biden’s racist and dehumanizing remarks about Black Americans proves that he doesn’t believe Black men and women are capable of being independent or free thinking. He doesn’t deserve the vote of Black Americans.”

But the Trump campaign is now capitalizing on the blunder in more ways than one.

They’ve released a brutalizing new video ad calling Biden “racist” and exposing that he lied multiple times in the past about “marching” for civil rights.

Watch the devastating attack ad for yourself below:

Making matters even worse for himself, Joe Biden was publicly rebuked over the weekend by the NAACP after trying to use them as a way of defending himself by inaccurately claiming that they “endorsed him in every campaign.” The comments came during his apology for the statement in question, saying that he shouldn’t have been so “cavalier” about the black vote.

A statement released by the civil rights group reads in part,

“Yesterday, former Vice President Joe Biden made a comment about the NAACP’s endorsement. We want to clarify that the NAACP is a non-partisan organization and does not endorse candidates for political office at any level.”

The campaign’s store is selling t-shirts with “#YouAintBlack -Joe Biden” printed on the front. And the “Black Voices for Trump” coalition brilliantly launched “youaintblack.com” which promotes the sale of the t-shirts and features a similar ad accusing Biden of racism.

Joe Biden capped off his terrible week by inadvertently saying in an interview, “I’m prepared to say that I have over 40 years of experience and I will beat Joe Biden.”

With just over five months to go until the presidential election, it’s already looking like a blood-bath.