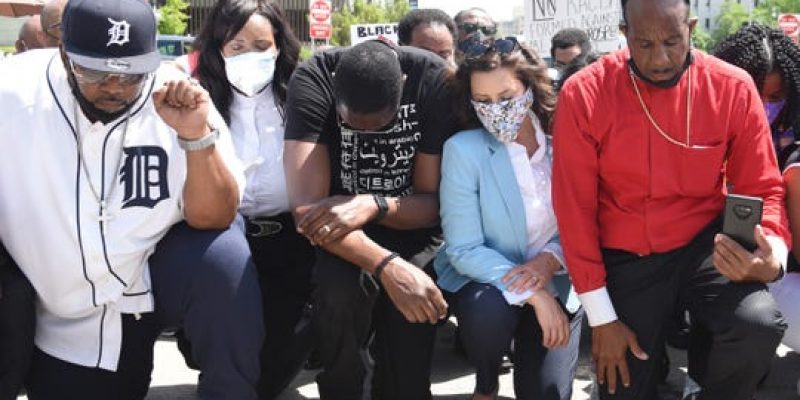 A picture is worth a thousand words as they say and this photo of Michigan Gov. Gretchen Whitmer in a giant crowd encapsulates the absolute hypocrisy that has been demonstrated by Democrat politicians across America over the past few months.

Ten days ago she would have sent police to arrest any large gatherings including sensitive events such as oh, I don’t know, FUNERALS OF LOVED ONES!

That is just one aspect of the tyrannical insanity that we have seen from our friends on the liberal side of American politics due to their unreasonably strict lockdown measures and their so-called commitment to the greater good.

But like always, politics takes precedence over people and the political radars of the liberal elite have “magically” made mass gatherings safe again so they can have their photo-ops.

These are the same people that were just yelling at the president for walking across the street to a burned church for what they criticized as a “photo op.”

I’m just going to say it like it is. The hypocrisy of the left is so blatantly obvious as they reverse course on everything they’ve been saying for months so they can use black Americans as human props during a time when African Americans are understandably hurting.

How else could you even try to explain the absurdity of this complete “180?” You can’t. Democrats’ approach to the COVID-19 pandemic has exposed themselves as the big-government tyrants that they are with no respect for the constitutional rights of the American people.

In fact, their heavy-handed approach to enforcing covid-related laws put many Americans, some who happen to be black, in the very same kind of situation that led to the death of George Floyd. Both the lockdown and the widespread support for what happened to George Floyd have put Democrats’ disgusting hypocrisy on full display.

And, of course, George Floyd will be allowed to have a funeral and probably a big one (as he should) and Democrats will not only allow it, they will be there in person to get as many photos as possible. Even though Joe Biden is the one who authored the “tough on crime” bill.

Lastly, many Democrats have been nothing less than complicit in the destruction of American cities at the hands of a group of leftist extremists who they refuse to condemn, Antifa.

Americans should rebuke Democrats in the November election for these multiple, obvious displays of total hypocrisy by the liberal elite who are currently trying to co-opt, for political purposes, what is a very serious movement for accountability and justice in this country.

It is just plain wrong and it makes me sick.