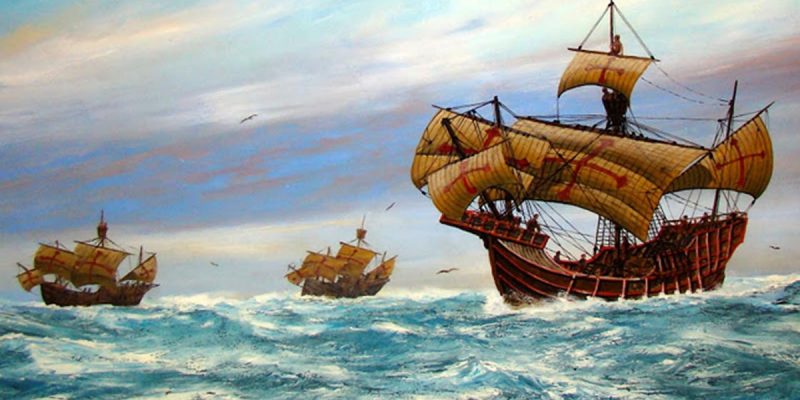 Have you ever wondered why Columbus’ three little ships all had red crosses emblazoned on their sails?

Well, it was because he was seeking another route to the far east because those nice Muslims had blocked off any and all access to India and beyond. So, Europe, who was in the final stages of fighting the Crusades, needed to find another trading route. In fact, historians claim the Crusades technically ended in 1492 and the Muslims had the trade routes blocked.

Columbus knew the earth was round, but he didn’t know the entire circumference of the planet. So, being the great navigator he was, he sailed east to get to his western destination.

Since he expected he’d have to sail through hostile waters controlled by the Muslims, he demonstrated his bravery by equipping his ships with bright red symbols of his and his crew’s faith and let God handle the rest. And he did.

So, you can thank the Muslims and their traditional asshole ways in having a hand in discovering North and South America. You can also question your own wisdom about him committing genocide, as he was a very good Catholic. Why else would he challenge the Muslims in such a bold way? Think about it for a minute, if you brain can operate that long, without being rewound. So, all these stories about about genocide are crap. What he did find was the indigenous people had a penchant for cannibalism, which would ruin one’s day.

For some reason, Italians were attracted to Columbus as one of their heroes. Why? I really don’t know, because the nation of Italy did not come into existence until 1861. Before that, the peninsula of Italy was carved up into little principalities, governed by a series of royal. well-to-do families. If you’ve watched shows like The Borgias or Medici, you have some idea of what it was like.

I submit the hatred for Columbus lies in the latent prejudice against Italians in this country, which still exists. I grew up with it and I believe many others did, too.