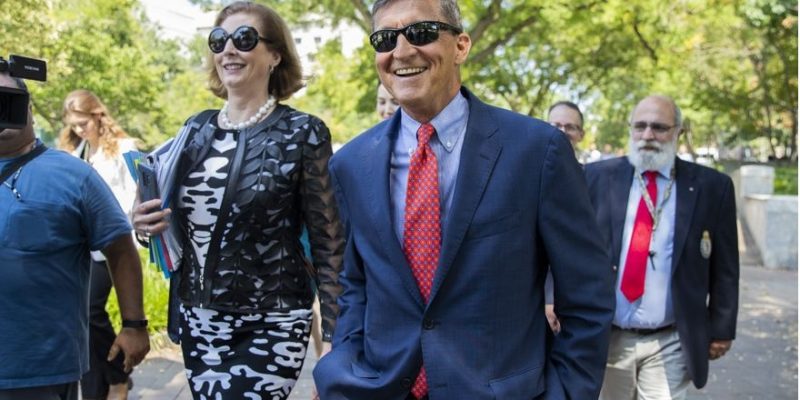 In the last four years, no one in our country has been more abused by our judicial system than General Michael Flynn. This American hero is a 33-year Army veteran who retired as a Lieutenant General. Incredibly, he has been treated even worse than President Trump.

In 2012, former President Barack Obama appointed General Flynn to be Director of the Defense Intelligence Agency (DIA). Soon thereafter, it was apparent that Flynn’s strong views on dealing with the threat of radical Islamic terrorism were not consistent with President Obama or the “Deep State” forces within the foreign policy and military hierarchy.

After complaining that the Obama administration was not doing enough to combat the terrorist group ISIS, Flynn was removed as DIA Director. Even since his removal, President Obama has made no secret of his disdain for General Flynn.

Following his dismissal, Flynn resigned from the military and started a consulting career. He counselled several Republican presidential candidates and eventually became an advisor to the Trump campaign in 2016. After earning Donald Trump’s trust, he was appointed to be National Security Advisor after the President was elected in November of 2016.

During the transition period, Flynn had conversations with a variety of foreign leaders, including Russian ambassador Sergey Kislyak. These conversations were perfectly normal for any incoming National Security Advisor.

However, Flynn was already under investigation by the Obama administration for his supposedly improper ties to Russia. His conversation was recorded by U.S. intelligence agencies, and Flynn’s name was subsequently unmasked and leaked to the media. This leak was a federal crime, although the culprit has never been revealed or prosecuted.

During the initial days of the administration, then FBI Director James Comey set up Flynn by sending over agents to interview him. Flynn was not given a warning that it was a crime to lie to the FBI. He also did not have a lawyer present during the interview. The meeting was conducted in a way for Flynn to be relaxed and thinking it was a casual conversation among friends.

Initially, Comey believed the comments did not constitute a crime, but the case was continued. Eventually, General Flynn and Special Counsel Robert Mueller agreed to a plea deal in which he was charged with “willfully and knowingly” making “false, fictitious and fraudulent statements” to the FBI.

Flynn made this deal because prosecutors were threatening to charge his son with a crime. The sentencing for Flynn was postponed several times and eventually he withdrew his guilty plea after hiring a new attorney, Sidney Powell. Then, the Justice Department filed a motion to dismiss the charges against Flynn because the prosecution had acted in “bad faith.”

Unfortunately, Judge Emmet Sullivan, who presided over the case, did not allow the case against Flynn to be dropped. He ordered “friend of the court” amicus briefs to present arguments against the government’s decision to drop the case. In the meantime, Sidney Powell filed an emergency petition for a writ of mandamus with the United States Court of Appeals, D.C. Circuit. It asked the Appeals Court to order Sullivan to dismiss the case. In a 2-1 decision, the Appeals Court ruled that the Judge must grant the government’s motion to dismiss.

Again, Judge Sullivan refused to comply. In the latest development, he is ignoring the decision from the higher court and asking the entire Appeals Court to review the case. This “en banc” request is highly unusual but is typical of the type of treatment that Flynn has received.

Sadly, it seems that Judge Sullivan is intent on punishing Flynn. He should not be acting as both Judge and prosecutor. Hopefully, Flynn will eventually be exonerated, and the American people will be able to hear his entire story.

At this point, General Flynn is being held hostage by an out of control judge who will not relinquish the case. Hopefully, President Trump will immediately pardon General Flynn and end this miscarriage of justice.

Despite the misleading media narrative, Flynn was never a Russian agent. His conversations with the Russian ambassador were routine for an incoming National Security Adviser. Even corrupt former FBI Director James Comey did not find anything troubling in Flynn’s conversation.

While Flynn and other Trump associates have been treated miserably, nothing has happened to the FBI agents and Obama administration officials who spearheaded the attempted coup of President Trump. Nothing has happened to Hillary Clinton after she sent classified and top-secret emails from an unsecured private computer.

The latest report is that the investigation by Justice Department prosecutor John Durham into the origins of the “Russian collusion” myth may be postponed until after the election. Reports are that Durham does not want his work to be viewed as “political” and that he will “punt” it until after the November election.

If Durham waits that long, he may as well end his investigation now. If Biden wins, none of Durham’s recommendations will ever be implemented. There is one chance for justice and that is for this investigation to come to a swift conclusion and that the entire findings be released. If this happens, the American people will finally understand the extent of the fraudulent witch hunt that ensnared General Flynn and others associated with President Trump.

The truth should have a major impact on the upcoming presidential election, but, unfortunately, it has proven to be exceedingly difficult for accurate information to be revealed to the public. The forces pushing for a cover-up are immensely powerful, but if courageous action is taken, justice will be done, not a minute too soon.