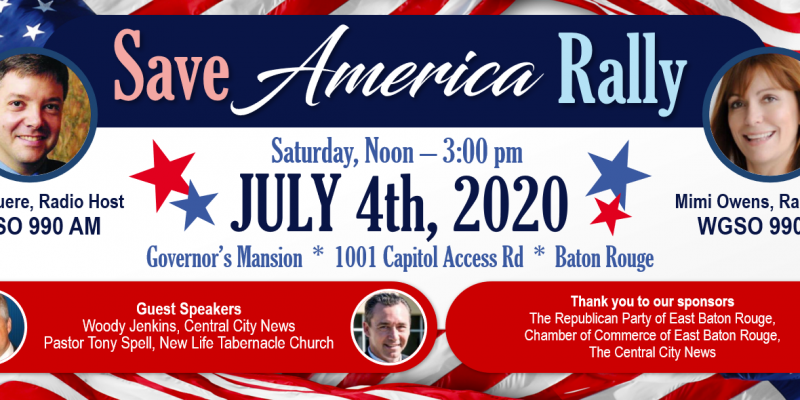 There is a mob that wants to destroy our country. They want to change our political and economic systems and move us toward a communist form of government. Part of their attack is to demonize our history and traditions and destroy our monuments and symbols.

While millions of Americans love the country and revere our traditions, the radicals hate America and want to radically transform our nation. They plan on accomplishing their mission by eroding trust in law enforcement and targeting police departments for destruction across the country.

In the last six weeks, the American people have seen an unprecedented assault on our country. After the tragic killing of George Floyd by a Minneapolis police officer, mobs descended on cities coast-to-coast to burn, loot and destroy.

While plenty of innocent business owners and citizens were attacked, police officers were targeted the most. In the past six weeks, police officers have been physically assaulted on countless occasions and they have been ridiculed, maligned, and insulted. They have also been charged with unprovoked violence and racism directed at African Americans.

Despite the statistics showing the vast majority of police encounters are peaceful and the number of unarmed African Americans killed by police is very low, left wing agitators have succeeded in convincing Minneapolis to disband their police department and New York City into removing $1 billion in police funding.

Of course, these actions will lead to chaos and a massive increase in crime. Already, we have seen violence increase in the last six weeks in many cities throughout the nation. This is the result of police officers either resigning, taking sick days, or showing less interest in challenging the criminal element.

It is an exceedingly difficult time for anyone to be a police officer today. Police recruitment must be extremely challenging in an environment where they are not supported. the results of violence toward police and the lack of support from weak politicians following the orders from the mob.

It is not only police that activists are trying to destroy. In the past six weeks, countless monuments have been toppled, flags have been changed, amusement rides have been altered, product packages are undergoing a politically correct overhaul. Other products are changing their supposedly offensive names, all to satisfy the mob. In addition, movies have been removed, police shows have been cancelled, even cartoons have been adjusted.

This “cancel culture” is so toxic that innocent people are being fired just because they support Donald Trump or love the country. If you believe in “All Lives Matter,” which includes black Americans, you might lose your job in the oppressive environment that exists today.

The left is on a roll with no pushback from Republicans. In fact, some Republicans are joining in the fray to advocate anti-police measures and bills to remove Columbus Day from our list of national holidays. Other than President Trump, there is no leader from the Republican Party who has stepped forward to say enough of the madness.

With no one else doing anything and because everything that we hold dear is under assault, we decided to act. Mimi Owens and I host He Said, She Said every Monday afternoon at 5 p.m. on WGSO 990-AM radio in New Orleans. We saw too many good people afraid to stand up for their country, which happens to be the greatest nation on the face of the earth.

To bolster the “silent majority,” we have decided to host a Save America Rally across from the Governor’s Mansion in Baton Rouge from Noon until 3 p.m. on Saturday July 4, Independence Day.

While we have flaws and tragic mistakes in our past, there is much more to celebrate about our country, our history, our traditions, and our symbols. America has made tremendous progress toward racial equality and it remains the best country on earth for all people, regardless of race, to succeed.

Sadly, this success will not happen if the mob is able to destroy our capitalist economic system. So, we must fight to protect this system which has allowed more people to escape poverty than any other system in the history of the world.

There is nothing wrong with being proud to be an American. Mimi and I are proud of our country, yet many left-wing agitators have targeted us because of our pro-American views. Because we decided to host this rally, we have been subjected to a barrage of hate from the left-wing mob. We have received email and text threats, harassing phone calls and mail, and been the subject of nasty posts online.

One of the leaders of Black Lives Matter, Shaun King, posted a TV interview with us on his social media site. This exposure provoked thousands of hateful messages from people making unfair and false charges about us.

A producer at WWL 870-AM radio, Ian Hoch, called us racists and white supremacists for holding the rally. He encouraged his supporters on a Black Lives Matter site to sabotage our radio show with hateful calls. Because of his egregious actions, he was forced to give a weak apology on air, but it described neither what he did, nor the people he targeted with hateful messages.

Regardless of Ian Hoch and the others working overtime to intimidate us, we will not back down. In fact, we are looking forward to the rally on Saturday. If you love your country, we invite you to join us.

If you want to engage in racist or hateful talk or violence, we ask that you not attend. This is only for those who are positive about our country, our history, and our future.

Our rally will be a free event. There will be inspiring speakers, great music, refreshments, and plenty of flag waving.

For more information, check out SAVE AMERICA RALLY

Hope to see you Saturday in Baton Rouge!