Way back at the end of April, Louisiana Attorney General Jeff Landry sent a letter to Gov. John Bel Edwards asking him to be somewhat understanding about churches and the role they play in the spiritual and mental health of communities, and thus give them the opportunity to continue serving their parishioners.

Edwards ignored the letter, despite the fact he took a stiff rebuke from Fifth Circuit Court of Appeals judge James Ho in the Tony Spell case. Ho concurred with the court’s decision that since Edwards’ stay-at-home order had expired Spell’s lawsuit against the governor was therefore moot, but that didn’t stop him from popping off about Edwards’ shutdowns and whether they’re fully justified given their lack of enforcement against protesters.

But, among the various pages judges dedicated to dismantling Spell’s logic, was also a message cautioning Gov. Edwards on the inconsistency between his stances on religious gatherings and other gatherings, and protests.

“In recent weeks, officials have not only tolerated protests—they have encouraged them as necessary and important expressions of outrage over abuses of government power,” wrote Circuit Judge James Ho. “For people of faith demoralized by coercive shutdown policies, that raises a question: If officials are now exempting protesters, how can they justify continuing to restrict worshippers? The answer is that they can’t.”

Ho wrote that he didn’t question the sincerity behind the governor issuing a gathering ban, but warned the governor that any message suggesting gatherings are dangerous to public health need to be applied “consistently, not selectively.”

“If protests are exempt from social distancing requirements, then worship must be too,” Ho wrote.

Ho went on to say, “public officials cannot devalue people of faith while elevating certain protestors. That would offend the First Amendment—not to mention the principle of equality for which the protests stand.”

Another issue raised in Ho’s statement was the governor supporting church services held outdoors but limiting indoor services. Ho noted logic supporting that decision is not conclusive among health experts and presents a dilemma when applied to other events beyond religious gatherings.

“Under his logic, the Governor would allow tens of thousands of LSU fans to assemble this fall under the open sky at Tiger Stadium while forbidding countless others from cheering on the Saints under the Superdome,” Ho wrote.

At the end of his statement, Ho wrote he expects future challenges to the governor’s gathering bans could end differently than Spell’s did. He warned the governor that piecemealing the law could be problematic.

“The First Amendment does not allow our leaders to decide which rights to honor and which to ignore. In law, as in life, what’s good for the goose is good for the gander,” wrote Ho. “The principle that freedom for me, but not for thee, has no place under our Constitution.”

That was two months ago, and while Louisiana is now in something like Phase 2 of reopening from COVID-19, not much has changed with respect to churches. Accordingly, Sen. John Kennedy, against whom Edwards appears readying a campaign when Kennedy’s Senate seat comes up for re-election in 2022, brought up the question of churches again. Given that other states have declared churches as “essential” businesses like gas stations and WalMarts, Kennedy suggested that Edwards follow suit… 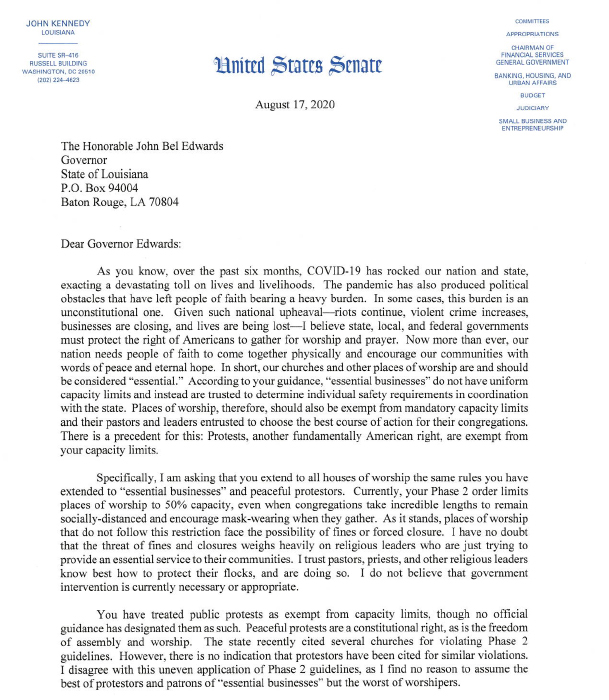 Edwards ignored that letter as well, but something interesting happened on that score last week.

Which was that on Thursday, there was a conference call the governor held with pastors, at which he pontificated in the usual way about COVID-19 and various other subjects. Edwards said he hadn’t missed a church service in six years, which was a comment intended to show how faithful a Christian he is but didn’t sit right with a number of them seeing as though many of their parishioners can’t say the same thing due to not being as connected and, shall we say, privileged as Edwards is to find workarounds from his edicts.

And of course, those limitations are reflected in the collection plates at their churches, which does matter to the pastors. They have to make payroll, after all.

Edwards was asked about Kennedy’s letter, and he did a very inartful dance around the question. And later in the call, Edwards demanded the pastors not tweet about it or otherwise share what was said, threatening that if his statements were to be made public he wouldn’t be able to provide the pastors with this kind of access in the future.

The continued tolerance and subservience shown to this guy as he strangles life in Louisiana is something we are at a loss to understand. But as Charles Krauthammer once said, “what can’t continue won’t continue.” At some point this will break down, and when it does it’s going to be very interesting around here.