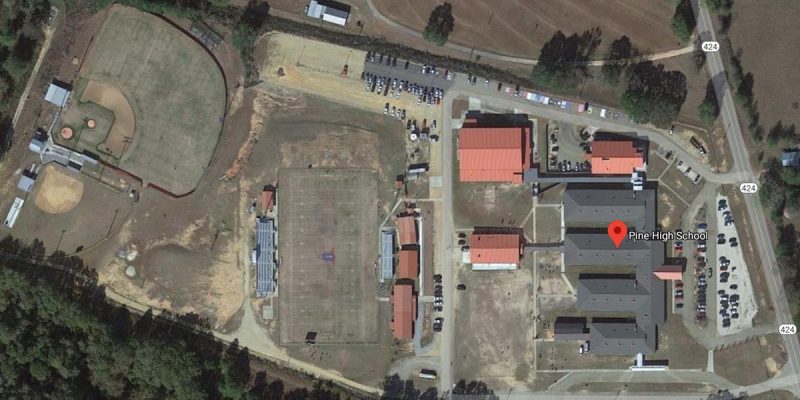 Just as you can’t stop students participating in athletic events from insulting the flag, you can’t censor their artistic expression that doesn’t disrupt a school’s educational mission or promotes vulgarity or illegal drug use, a Louisiana school district needs to learn.

The Washington Parish School District finds itself mired in controversy over the issue. Apparently, by custom at its Pine Junior/Senior High School seniors have designated parking spots where they may have painted whatever isn’t negative, rude, or offensive in language, pictures, or symbols.

Senior Ned Thomas had a representation painted of Republican Pres. Donald Trump from mid-waist-up, with the nation’s chief executive wearing a suit and tie, stars and stripes bandana, sunglasses with stars on one lens and stripes on another, and overall looking serene. Not long afterwards, he was informed that the picture was too “political” and the district had it painted over.

Thomas, who is the nephew of Democrat Washington Parish Pres. Richard “Ned” Thomas, argued not only was that stipulation not part of the rules, but that it was applied selectively. He said he knew of other parking spot art that was political nature, and also that another student had a part painted over which had read “Trump 2020.” He plans to sue the district to recover the $200 spent on the art, attorney’s fees, and to have the opportunity to have it painted again.

But in his filing Thomas doesn’t have to claim discrimination in rules application. Much more simply, his attorney can point towards Tinker v. Des Moines Independent Community School District that assures that (along with other cases since) schools can’t censor student public political expression unless it disrupts a school’s educational mission or promotes vulgarity or illegal drug use. Even the most virulent Trump-hater can’t argue that the art on Thomas’ spot fails on any of these accounts.

This echoes the justification behind letting students engage in disrespectful behavior towards the American flag such as failure by a team member to stand at attention during the national anthem at events such as athletic contests. School can’t penalize students with a condition like unless they show respect to the flag when asked they won’t be allowed to participate in extracurricular activities.

Thomas has set up a crowdfunding appeal to raise money for legal representation. He shouldn’t have to; the district should recognize it violated his rights and pay for painting his spot with the same image.

Interested in more news from Louisiana? We've got you covered! See More Louisiana News
Previous Article APPEL: Hurricane Laura At Least Showed Us The Economic Importance Of Ports
Next Article Drew Brees Should Have Quit When His Team Abandoned Him