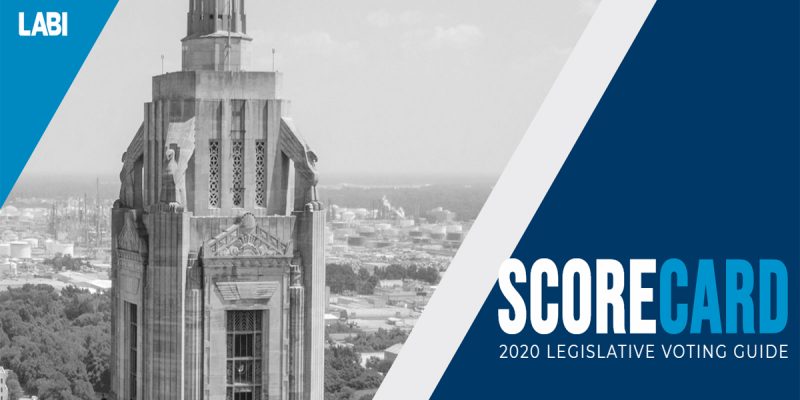 For the Louisiana Legislature, and for those of us who advocate before it, 2020 was certainly a year that challenged any playbook on public policy. Not only was this one of the largest freshman classes our lawmaking body has seen, with 52 first-time legislators navigating new territory; not only did the House Speaker and Senate President for the first time in modern times forge a strong relationship that bridged a traditionally deep divide; but numerous curve-balls in the way of a novel coronavirus changed the game dramatically.

For the Legislature itself, it meant suspending action for weeks while the state “flattened the curve.” It meant empty halls usually packed with busloads of students on field trips, tourists and other interested onlookers, temperature checks, masks, plexiglass between seats on the House and Senate floors, and sanitized everything…from door handles to hands to microphones. It meant streamlining legislative priorities and doing without, it meant accepting unfinished business, for now. It meant the first of what will likely be more special sessions to finish what business they could.

And it meant a shattered economy, bringing with it the budget challenges and uncertainty that creates.

But this new Legislature met the challenge in an encouraging way. And as LABI undertook our annual routine of scoring their actions on behalf of Louisiana’s business community, its job-creators and economic opportunity, we were encouraged by the innovative problem-solving, tenacious resolve and bipartisan temperament we saw.

In reconvening the regular session for the remainder of May and a special session during the month of June, the Legislature allowed itself the opportunity to address the adverse economic impacts arising from efforts to battle the COVID-19 pandemic. Many of Louisiana’s small businesses, some 2,000 of them members of LABI, took a significant financial hit from the closure or limited operation imposed by the Governor’s stay-at-home order. Add to this the reluctance of customers to shop or dine at their favorite local venues once the order was scaled back in mid-May, and the economic headwinds small employers faced became monumental.

Small business owners typically have little in reserves to cover a month-long cessation of their businesses, let alone the more extended period some are having to endure. Most in the Legislature understood that many of these weakened job providers were going to have trouble keeping their doors open and their workers employed. There would be cash-flow issues thwarting their ability to meet their operating expenses and payrolls. There would also be new costs of PPE, safety practices and in general, doing business associated with the COVID-19 threat and their efforts to keep their employees and customers safe from infection.

The Legislature also recognized that without a reinvigorated private sector, already diminished public sector revenues – state and local – would only decline further. Numerous businesses – restaurant, lodging and retail establishments in particular – have now closed their doors temporarily or permanently, adding their employees to the unemployment rolls with poor prospects for returning to work in the near term. The loss of the tax revenue generated from these businesses and their workers will only further threaten the budgetary picture forming for state and local governments.

The House and Senate leadership took steps to head off this outcome. They formed the Louisiana Economic Recovery Task Force comprised of private sector business leaders from across the state to formulate recommendations for economic relief and recovery. The task force released its first report on May 8 and followed up with a second report on June 4 with the intent that some of these recommendations become bills designed to help struggling businesses across Louisiana.

The measures ultimately passed by the Legislature and signed by the Governor seek to keep small businesses solvent. On the legal front, bills were filed to provide limited liability protection for governments, businesses, and manufacturers of face masks and hand sanitizer, all of whom are keeping our economy and supply lines going. Legislation was filed to finally reform Louisiana’s broken legal system to lower costs on businesses and households, most notably through lower auto insurance rates.

On the financial front, bills were filed to lessen the franchise tax burden on small businesses and to provide immediate cash-flow assistance by allowing them to retain a fraction more in vendor’s compensation for sales taxes they collect for the state. Other bills will provide a rebate to small restaurants and retailers to encourage their expansion into low-income, economically distressed areas of the state known as Enterprise Zones in order to help those communities recover and grow. Unfortunately, the bills were watered down as they worked their way through the legislative process.

While the amount of relief the Legislature finally found acceptable wound up being less than what is needed, it will help to make a difference for some employers and their workers. As one restaurant owner explained during a committee hearing, it will help to pay a utility bill for the month or make possible a raise to entice an employee back to work. In the meantime, we must look ahead to the fiscal session of 2021 and prepare to enact true tax reform to help reinvigorate Louisiana’s ailing economy and make us more competitive with our neighboring states that have historically fared much better than us.

But back to the LABI Scorecard. Though these back-to-back sessions saw abbreviated agendas and a limited focus, they left us with many scorable actions directly affecting our members and Louisiana’s business community. As is the norm with this process, our scores are based on House and Senate floor votes and procedural moves all members of the relative body have opportunity to vote on. But absent in the scores are the poignant, hard-fought battles in committee – which this year in particular, were significant.

To our LABI members, to Louisiana’s business community and to the general public – please take the time to examine this document. As always, it’s a reckoning of which legislators support pro-business legislation, but it’s also a thorough guide to a very new, very different, and very inspiring body of lawmakers.

On behalf of our 2,200 member businesses around the state and the faithful support of our Board of Directors and Issue Councils members, we hope you enjoy this report and look forward to continuing the fight to help Louisiana reach its maximum potential.

Interested in more news from Louisiana? We've got you covered! See More Louisiana News
Previous Article SADOW: Shreveport Surrenders On Tax Hikes At A Bad Time For Perkins
Next Article Landry On Violent Crime: “There’s A Tipping Point In This Country”