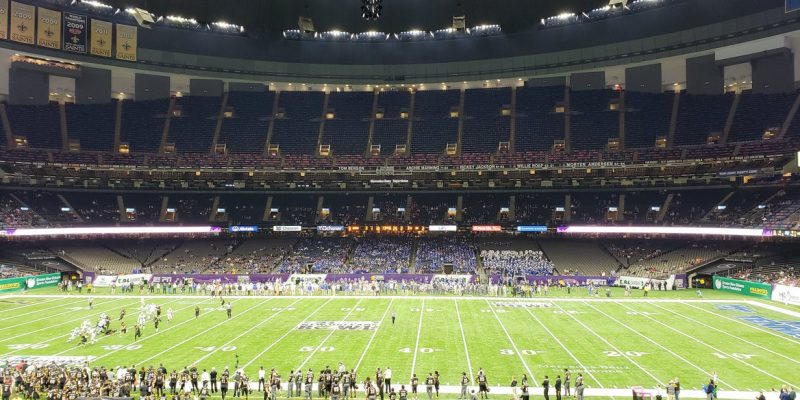 Who’d have thought that Mardi Gras would be the last normal week of the year in Louisiana?

Yet here we are seven months removed from Zulu, Rex, and the Meeting of the Courts wearing a far different kind of mask than those riding on the wood and canvas Carnival floats.

Restaurants are kinda open, bars even less so, and there are coroplast cut-outs of people in baseball stadium bleachers.

Up north, Broadway is dark for the foreseeable future and the Toronto Blue Jays gave Buffalo a taste of Major League city status it hustled so hard for in the early 90’s, yet with the Cuomo imposed cruel caveat that no locals could actually see the game in person.

But then again that really wasn’t the worst thing Andy Cuomo has done in the past half year, was it?

After the biggest domestic social disruption since World War II ration cards, Americans are craving for a modicum of the life we lived pre-imported virus from Communist China (never forget where this deadly plague came from).

And in a state that is as “Abby Normal” as Louisiana, we are all jonezin’ for a double shot of Joie de Vivre.

And the stately oaks beside the House that Huey mostly built gave us  a few yards’ worth.

That it wasn’t the football spike to the greatest season in all college football wasn’t that important.

At least to me.

Seriously, the program got picked apart in the draft, abandoned by staff, and then endured a round of COVID-19 facilitated departures.

What did you honestly expect?

But the stadium was open to 25,000 fans, the Golden Band was making music (albeit from the stands with muffled instruments), and a very real game of football was played, even if not an optimal game.

I Stub Hubbed my way into the stadium and it’s worth noting how well-prepared LSU staff was for their lead off home game in these interesting times.

Masks were expected to be worn, the administration shrewdly ran a ticket check midway on the hill to avoid crowding, seats were either roped or stickered off to ensure distancing, cashless transactions were implemented, and all of the folks working the game could not have been nicer or more hospitable.

Everyone was just happy to be there and it showed.

The athletic administration should be very proud of its attendance management of this unprecedented event that protected the health of the fans and gave us a sniff of what we once knew and will not take for granted again.

And with the social distancing the scene brought back memories of the Curley Hallman torturous tenure, where fans had their own row due to toxic play and not vapors.

Yet the next day another Louisiana team was home but before a much smaller crowd.

For the second consecutive Saints game, fans, even on a limited basis, were not permitted to attend, giving the home game in the Superdome more of a feel of an exhibition contest in Uzbekistan.

And why is this?

And why is that?

Because the mayor of New Orleans said so.

Apparently there isn’t going to be fun of any kind within the confines of Orleans Parish, though the harsh restrictions on high school football began to be walked back after other parishes offered to host practices and games and the heat got cranked on City Hall by local media and the parents of student athletes.

What medical advances were achieved in the fight against Coronavirus during the several week period between “tough luck” and “maybe we can work something out”?

Feel free to make uncharitable assumptions for they can’t be any less science based than the sudden about face.

But the city’s professional football team remains in the “phantom zone” and the folks who make a living from working at events and in businesses who benefit from Saints games are left speculating as to the what and when will be the latest arbitrary decision issued by the city’s political leadership.

The next Saints home game is Monday Night Football against the Chargers in two weeks.

While Superdome and Saints staff have developed accommodation plans for a scenario that allows more than 1000 guests in the cavernous stadium, a last second go ahead from across the street won’t do any good.

The Saints need to know sooner than later as a system of fan selection and seat reassignment for attendees needs to be implemented.

Unlike most other major cities, New Orleans has a service-based economy; events aren’t a luxury but a necessity for both city revenue and the many wage earners.

We’re not Charlotte or Omaha.

LSU provided a great example of how to efficiently and effectively manage a football game during COVID-19, even with scaled down attendance.

It’s time for the Superdome to reopen at some reduced level for the good of the people whose livelihoods depend directly or indirectly on events and our collective morale.