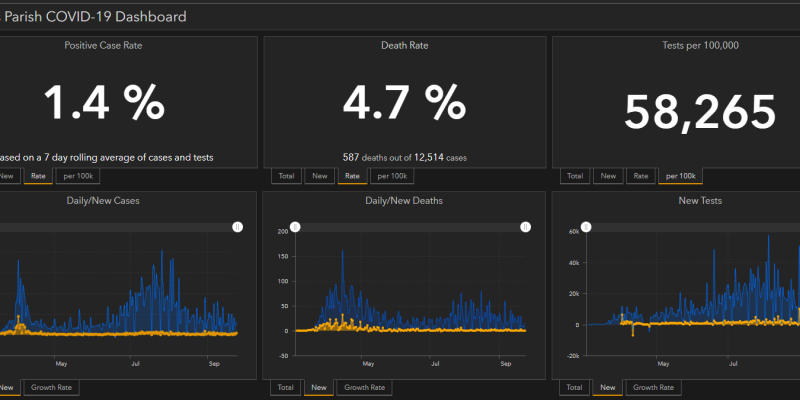 By the data, you would look at what’s currently going on with respect to COVID-19 and the lockdown in Orleans Parish and conclude that it shouldn’t have any more restrictions in place than anywhere else in the state. But of course that isn’t what’s happening there. The lockdown in New Orleans is the most draconian in all of Louisiana, and LaToya Cantrell, that city’s California transplant mayor who insists she “won’t be bullied” into reopening the city, has shown zero signs of relenting.

This week saw a pretty good example of just how dystopian the situation in Cantrell’s Lockdown New Orleans has become. Tracey’s, a restaurant and bar in the Irish Channel area of the city, saw itself set upon and villified, and ordered to close, because Cantrell insisted it was operating far too close to normal for her preferences…

Tracey’s Original Irish Channel Bar has been an institutional mainstay uptown since 1949. It is known for its great food, bar fare, drink selection, and more. Of course, many may not totally agree, as taste is subjective.

On Wednesday, the bar was shut down after New Orleans COVID-19 snitches sent Cantrell pictures and videos of the bar during the Monday night Saints vs. Raiders game.

In all fairness, Tracey’s posted videos themselves to their own Facebook page, showing off the crowd they had for the Saints game. It was an obvious gesture letting their followers know that New Orleans may finally be resembling something close to “back-to-normal.”

Watching Monday Night Football at the Neighborhood Spot – What Could Be Wrong with That?

Now, if your business was purposefully violating state and city mandates, do you think you would document that and post it for all of the world to see?

I seriously doubt that an institution that is over 70 years old would recklessly do that.

Perhaps local snitches and Cantrell’s COVID-19 spies did share these videos with the mayor. Maybe someone sent it to someone who did. You know how these things work. Maybe they could have been in attendance?

To think that Cantrell made such a rash decision based on two videos seems to be somewhat misguided. But hey, it wouldn’t be the first time, would it?

Essentially, people found videos from Tracey’s Facebook page of people watching the Saints lose to Las Vegas and proceeded to snitch the bar out to Cantrell as violating her lockdown restrictions.

This is in New Orleans. And the city’s COVID outbreak is essentially over. From the Orleans Parish COVID dashboard…

Note that the graph on testing, on the far right, is the only one not in deep decline. When you’re sitting on a 1.4 percent positive rate and you’ve done more than 227,000 tests of a population of 390,000 people, it’s over.

New Orleans ought to be reopening, not continuing this lockdown. Why isn’t New Orleans reopening, and why is LaToya Cantrell sending the jackboots out to destroy the livelihoods of regular folks?

We had an item at The Speakeasy this morning which makes us wonder if maybe more isn’t going on than we all think. Lockdown culture might exist for its own sake, you know.

As Covid-19 spread earlier this year, governments introduced lockdowns in order to prevent a public-health emergency from spinning out of control.

In the near future, the world may need to resort to lockdowns again — this time to tackle a climate emergency.

Shifting Arctic ice, raging wildfires in western US states and elsewhere, and methane leaks in the North Sea are all warning signs that we are approaching a tipping point on climate change, when protecting the future of civilisation will require dramatic interventions.

Under a “climate lockdown,” governments would limit private-vehicle use, ban consumption of red meat, and impose extreme energy-saving measures, while fossil-fuel companies would have to stop drilling.

To avoid such a scenario, we must overhaul our economic structures and do capitalism differently.

Many think of the climate crisis as distinct from the health and economic crises caused by the pandemic. But the three crises — and their solutions — are interconnected.

Covid-19 is itself a consequence of environmental degradation: one recent study dubbed it “the disease of the Anthropocene.” Moreover, climate change will exacerbate the social and economic problems highlighted by the pandemic.

That’s from a long screed by an Italian economist named Mariana Mazzucato, who is a climate change nut and a hard-core socialist who believes capitalism needs to “change” into, essentially, a Hitler/Mussolini-style fascist model in which the entrepreneur and business owner is a slave to the state. Mazzucato is currently a professor at University College London. You’d think this idea of a lockdown of a free economy morphing its justification from COVID to climate change wouldn’t have any takers, but you’d be wrong – despite the fact even the Hard Left doesn’t think a COVID lockdown will save the planet.

If you can get through that whole thing without being horrified, you probably ought not be reading The Hayride.

Why do we bring this up? Well, earlier this week there was this…

MAYOR CANTRELL JOINS 11 OTHER MAYORS OF MAJOR CITIES TO COMMIT TO DIVEST FROM FOSSIL FUEL COMPANIES, INVEST IN GREEN AND JUST RECOVERY FROM COVID-19 CRISIS

NEW ORLEANS — The City of New Orleans today became one of 12 cities representing more than 36 million city residents to pledge to divest from fossil fuel companies and advocate for greater sustainable investment as part of their commitment to accelerating a green and just recovery from COVID-19.

C40’s declaration, “Divesting from Fossil Fuels, Investing in a Sustainable Future,” brings together mayors of some of the world’s most influential cities, led by Mayor of London, Sadiq Khan, and Mayor of New York City, Bill de Blasio, stating that: “Now is the time to divest from fossil fuel companies and undertake investment and policy change that prioritizes public and planetary health, building back a more equal society and addressing this climate emergency.”

“As a member of the Global Mayors COVID-19 Recovery Task Force and the Mayor of a city that is at the forefront in the battle against climate change, I am proud to sign on to this pledge to divest from carbon-intensive assets. The City of New Orleans embraces clean technologies and a green future, and we are committed to leveraging our financial resources for a more equitable and sustainable economy,” said Mayor Cantrell.

The declaration champions fossil fuel-free, green finance as a key strategy for rebuilding equitable, sustainable urban economies and increasing resilience against future crises. Signatories pledge to use their financial might to promote a just and clean energy transition through concrete actions at the city, national and international levels.

Cities signing on to the new declaration commit to build momentum for fossil-free and sustainable investment by:

According to Energy Policy Tracker, more than $200 billion in COVID-19 recovery funds are being pledged to fossil fuels, though risky investments in coal, oil, and gas are key drivers of the climate emergency. Continued investment in fossil fuels drives emissions that endanger the Paris Agreement goals, jeopardize efforts to limit temperature rise to 1.5° C, and threaten to lock dangerous carbon emissions into economies, especially as governments determine preferred pathways to a COVID-19 recovery.

To deliver a green and just recovery, cities are committing to use their unique influence to drive high-return investments in the green economy, which are already estimated to yield average returns of 6.9 percent per year for sustainable funds, as opposed to 6.3 percent per year for traditionally invested funds. Mayors recognize that these forward-thinking investment strategies have significant potential to create jobs, safeguard against climate risk, and facilitate a decisive shift to the clean energy economy. This year alone, the International Energy Agency predicts demand for oil will fall by 9 percent, coal by 8 percent, and gas by 5 percent, while solar is expected to grow by 16 percent and wind by 12 percent, representing an enormous opportunity for economic growth.

The “Divesting From Fossil Fuels, Investing in a Sustainable Future” declaration is a critical next step towards realizing the vision for a Global Green New Deal, announced last October at the C40 World Mayors Summit in Copenhagen, Denmark. Endorsed by a broad coalition of business and labor leaders, youth activists, and civil society representatives, the Global Green New Deal reaffirms a commitment to protecting the environment, strengthening the economy, and building more equitable communities through inclusive climate action.

Remember, LaToya Cantrell is from Compton. She doesn’t give a damn about New Orleans. She’s been trying to push her name out there as a national and even international figure for the entirely of her time as mayor. And she’s constantly involved in these fuzzy Hard Left causes.

Following is a statement from Marc Ehrhardt, executive director of the Grow Louisiana Coalition, regarding the City of New Orleans’ decision to divest from ‘fossil fuel’ companies:

“In a time when our communities are bonding together in the face of unprecedented challenges, New Orleans is driving a wedge by making blanket political maneuvers without considering the ramifications to the hardworking people of our state. The energy industry has provided social and economic uplift to generations of New Orleanians, and this announcement seeks to devalue their work and their future in this community.

Louisiana is not London, Paris or even New York. We are proud to be distinct in our culture and communities. There should not be a one size fits all solution in how we approach safe, clean energy exploration and production.

The energy sector is at the forefront of innovative solutions to addressing global climate challenges and reducing emissions. Just walk three blocks from City Hall to see hundreds of Louisiana energy professionals in the Central Business District doing this every day.”

We talked to another representative of the oil and gas industry who said something even more pointed: “If New Orleans wants to divest itself of us, maybe we’ll divest ourselves of New Orleans.”

Does LaToya Cantrell care about that? She’s such an economic illiterate that maybe she never even considered it, but the guess is she’s had enough people in her ear warning that it’s a really bad idea to run off what’s left of the oil and gas industry in New Orleans that what’s really happening is she just outright rejected it.

And now, after threatening the corporate sponsors of the city’s big cultural events she’s attacking what’s left of its hospitality industry with this never-ending lockdown.

Because of COVID? When COVID is all but over in New Orleans?

You’re entitled to be a little suspicious that it’s the religion of Hard Core Leftism, rather than Branch Covidianism, which is driving Cantrell’s strange behavior.