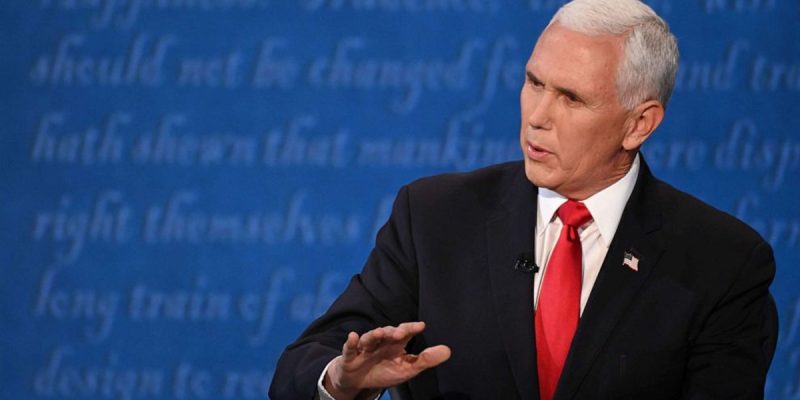 One of the axioms you hear from the pundit class every presidential cycle is that running mates don’t matter.

This declaration flies in the face of the entirety of American political history where regional balance, ideological representation, or party healing after a raucous convention have been the primary motivations behind one candidate being meticulously selected over another perhaps more qualified individual to fill the bottom half of a ticket.

President Abraham Lincoln, who urged the voters to not change horses midstream during the Civil War, had himself switched running mates in 1864.

And in 1976 President Gerald Ford ran in the election with Kansas US Senator Bob Dole as his Veep candidate even though Nelson Rockefeller was serving as vice-president.

But perhaps most relevant to this particular election was what happened with the Democrats in 1944 when party leaders demanded that a frail FDR essentially dump Vice-President Henry Wallace, who was visibly sympathetic to the Soviet Union, and in his place accept a haberdasher from western Missouri named Harry S Truman on the party ticket.

Nobody was under any illusions that Roosevelt would actually finish the fourth term he was seeking and that his running mate would certainly succeed him as president sooner than later.

With both of the 2020 major party nominees for president being septuagenarians the oft-dismissed  post of vice-president has become very relevant in this pandemic tainted (or rather cursed) year.

While President Trump is 74, the Republican exudes an energy of a much younger man.

In stark contrast Joe Biden, who turns 78 only weeks after the national election, looks and sounds every day of his age.

And as the Oval Office tends to age its occupants at an accelerated clip, it’s highly likely that a Biden victory in November 2020 will result in a Harris Administration at some point before January 2025 when the next presidential term ends.

And what the American public saw in Wednesday night’s debate was the same catastrophe of a presidential candidate who couldn’t even make it to the Iowa Caucuses.

Senator Harris behaved like a juvenile throughout much of the night displaying snide smirks and other unbecoming facial gestures during Vice-President Pence’s comments while also trying to get out rehearsed indignation lines accompanied with rehearsed “talk to the hand” body language.

Instead of comporting herself to the office she is really “applying for” (and I’m not referring to the vice-presidency), the former California attorney general came off like a rude Alameda County meter maid.

Vice-President Pence, who had a slow start and was at times painfully formal with a barrage of “thank you” prefacing to every question posed to him, warmed up as the debate meandered through one trap-question posed by the moderator (and author of a Nancy Pelosi biography that’s available in Amazon).

Though he had a habit of using too many words to express thoughts that could have been conveyed more efficiently, Pence overall racked up style points.

The vice-president was calm, cool, prepared, and dignified throughout the evening and deftly turned things around on both Susan Page and Harris without being overbearing.

Pence succinctly brought up unflattering aspects of Biden’s very long tenure in Washington, including opposing the raid to take down Osama bin Laden and support for trade deals that sent good paying manufacturing jobs south of the border.

Viewers could easily and more comfortably see Pence immediately stepping up to the top office if circumstances required, and thus won the debate hands down.

In contrast, Harris reminded the voters who they were going to end up getting for president in the event of a Democratic win.

At the conclusion of the lone vice-presidential debate, the junior senator from California had little to smile or smirk about as it was not a good night for the Biden-Harris ticket.