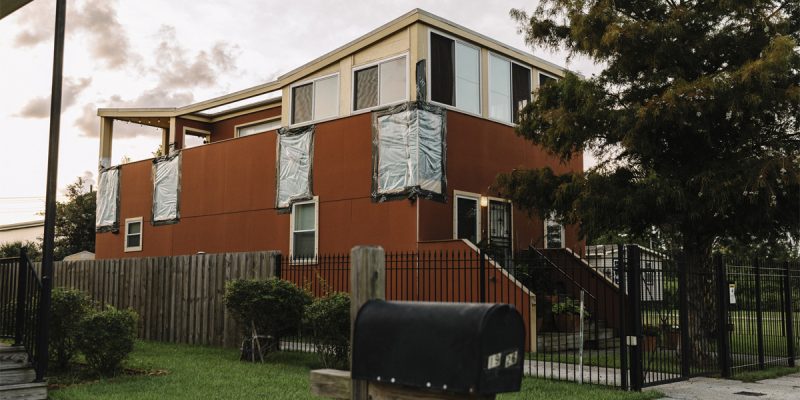 Hollywood superstar Brad Pitt created quite a stir in the aftermath of Hurricane Katrina when he purchased a home in New Orleans and launched Make It Right in December of 2006. The focus of this organization was to provide affordable housing for displaced New Orleans residents from the Lower Ninth Ward, an area devastated in 2005 by Hurricane Katrina.

Prior to the storm, the Lower Ninth Ward was already a troubled area, littered with crime, drugs, blighted homes and few businesses. Pitt and his Make It Right team were dedicated to revitalizing this area by giving homes to residents who had lost everything in the hurricane.

Their project was supposed to build 150 homes designed by modern architects using environmentally friendly materials. Although a ritzy fundraiser was held in 2012 that raised $5 million for the organization and a total of $26 million was eventually spent, the lofty goals were never reached. In fact, Make It Right only finished 109 homes and stopped all construction in 2016.

By 2014, complaints from homeowners were flooding into the Make It Right office. Instead of dealing with the concerns, no effective action was taken. Eventually, the organization closed its New Orleans office and residents were left alone to deal with homes that were designed and constructed very poorly.

Since 2014, the problems have only gotten worse. It has become so severe that several of these homes will need to be demolished. For example, a home located at 1826 Reynes Street, that was built only seven years ago, is set for “emergency demolition.” It is “in imminent danger of collapse and/or threat to life.”

Another nearby Make It Right home was demolished in 2018 and according to one neighbor, other homes designed and constructed by Pitt and his celebrated organization “need to be repaired, bad.”

One problem is that the organization used substandard lumber and has filed a lawsuit against a supplier. Make It Right has also sued their primary architect, alleging poor design and a host of other problems.

The real victims are the homeowners who thought they were receiving new homes that would give them a chance to rebuild their lives. These homeowners have now filed a class action lawsuit alleging the organization “deficiently constructed and built” homes using “defective products.”

One of the major difficulties with Make It Right was their commitment to be environmentally friendly. This obsession with being “green” led the organization to use “toxic free” lumber that could not withstand the humid and rainy climate in New Orleans. Thus, the homes started to develop mold, rot, leak, and collapse, creating electrical fires and gas leaks.

This is clearly another example of “Go Woke, Go Broke!” While trying to act in a manner that was climate sensitive, energy efficient and affordable, Make It Right, did everything totally wrong.

In the older areas of New Orleans, homes have survived for centuries, yet Make It Right homes did not even last a decade. While the homes were supposed to be architectural gems, the truth of the matter is quite different. These homes are eyesores that not only do not fit in with the surrounding neighborhood but are also totally out of place in a 302-year-old city like New Orleans.

When Make It Right started, celebrities jumped onboard the project with Brad Pitt and there was plenty of positive media attention. The message was clear, a Hollywood star was coming to save New Orleans with this housing project designed to build 150 homes in a better, more environmentally-friendly manner.

It was all hype as problems started from almost the very beginning. With substandard design and materials, more of these homes will have to be demolished in the days ahead. Instead of beautifying the Lower Ninth Ward, this project has accomplished the impossible, it has made a bad problem even worse.

Make It Right should have been called Made It Wrong. The next time a Hollywood star wants to come to New Orleans and save the city, residents should say “thanks, but no thanks.”