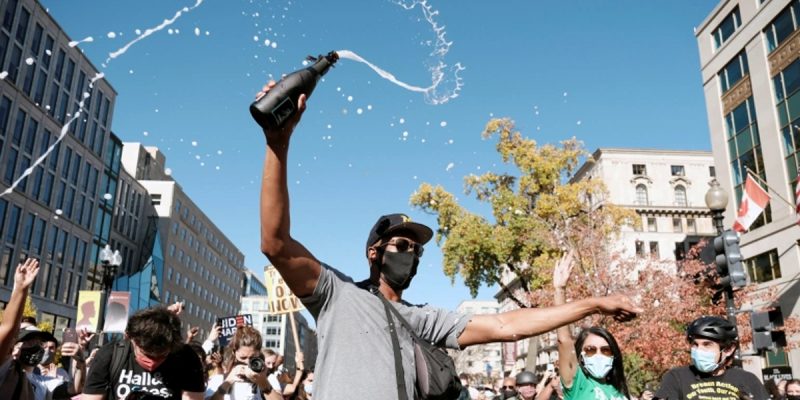 It’s Saturday,  and as we stand here we are probably the only two Trump supporters in cannabis-clouded BLM Place in Washington, DC.

We are surrounded by thousands of passionate young Biden fans reveling in profanity filled attacks on the President. I suppose that this was as it was in the Place de la Concorde in Paris during the French Revolution.

On TV Democrat leaders ramble on about how Biden wants to unite the country. But let’s be real, the thousands of Biden supporters surrounding us aren’t reveling over the prospect of compromise with that more than half of the country that were not for systematic change because of what Biden stood for. No, they want a complete remake of America, many a socialist remake. They want revenge against conservatives who dared undo their precious far-Left agenda and who partially unwound the Washington swamp, both of which that had been taking over America for generations.

And the real Biden? First, we will have to listen to the drivel of how he wants to unite all the people. And when that is over, we will have to wait to see if he will have the political courage to tell all these passionate devotees that being President of all the people means not trying to force radical social and economic policies onto a nation that clearly did not grant him a mandate.

I suspect that pressure from the radical Left will mean that his honeymoon period, the time in which he could demonstrate a legitimate effort to unite the nation, will be the shortest in history.

Tomorrow we return to the real world. Not being government dependent, we like most Americans have to return to work to try to keep the wolves from the door. If the idealistic residents of the La La Land that surround us think that we and what I believe is a majority of Americans are going to lay down and watch a bunch of East Coast and West Coast elitists undo more than two hundred years of freedom and prosperity, they just don’t understand the American character.

What did Democrat leaders say at this time four years ago? The Resistance starts today!