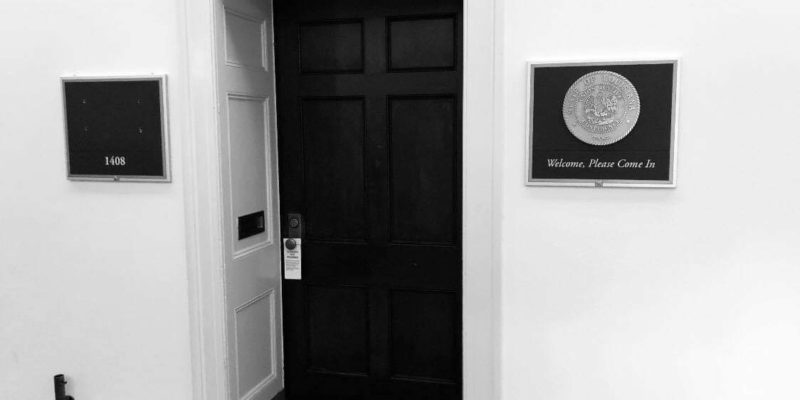 The day after Congressman-elect Luke J. Letlow  died, a mutual friend made a point of going up to the fourth floor of the Longworth House Office Building to see Office Number 1408, which was to be occupied by the 41 year old native of Start, Louisiana.

The seal of the State of Louisiana had been affixed alongside the entrance to the office but something was missing: the newly elected congressman’s name plate.

In that void were four drill holes where Luke’s name was to have been bolted.

On Sunday, January 3rd  Luke was to have been sworn in as the youngest member of Louisiana’s congressional delegation.

Instead on Saturday, January 2nd Luke’s funeral was held in Monroe, underscoring the tragedy of a light suddenly extinguished just as it was about to burn brightest.

Luke’s boss, mentor, and friend Dr Ralph Abraham delivered an eloquent eulogy that captured his protege’s essence, from his messy truck to his insatiable pursuit of genealogical data.

Luke’s services have been uploaded on YouTube and if you didn’t know Luke and you have both the time and the Kleenex you can get an idea of what kind of outstanding young man Louisiana lost.

Luke was that rare politician who lived by Tip O’Neil’s adage, all politics is local.  Luke lived that rule out of natural sincere instinct and not calculation.

Luke never forgot his country roots; in fact he built an extensive website and Facebook page dedicated to them.

Luke’s enthusiasm for this endeavor can be found at www.RichlandRoots.com and you’ll grasp precisely how passionate Luke was to cataloging and preserving every piece of history of the rural parish that he proudly called home.

Luke didn’t just love history, he was a genuine historian.

But most commendable of all his outstanding attributes was Luke’s total commitment to the people of the state to the very end.

While on vacation for Christmas, I saw that Luke was on-line and messaged him good wishes for his recovery, which led to a conversation that I’ll never forget.

Though he was in ICU as his battle with COVID became more serious, Luke, tubes connected to his nose and all, discussed the struggles he endured along with the seemingly small victories, basic acts like sitting up in a chair, that mean a great deal to those fighting their way through this unpredictable virus that randomly affects its victims.

But then Luke turned conversation straight into his pitch to the House leadership for committee positions that he thought that could be leveraged to the benefit of the 5th district, one of the poorest in the country.

He handicapped his chances of landing on appropriations as a freshman though Luke was also angling for foreign affairs so he could export the district’s agriculture goods to new international markets.

As we went back and forth on language in his presentation sheet related to the length of Fifth District’s frontage along the Mississippi River, I had little doubt Luke would get out the hospital and claim the committee assignments he was pursuing.

Here was Luke, in a hospital bed simultaneously fighting for both air and his constituents and yet in poor health was trying to “win the day” for his district.

Unbeknownst to him that he had less than 90 hours left in this world yet Luke spent much of that time working on a job he would never formally begin.

One could only imagine what Luke would’ve been able to accomplish on Capitol Hill at full strength.

I signed off that Christmas night happy to have provided a bit of distraction for a friend who had to be hurting in countless ways, from the physical suffering of the brutal coronavirus and the separation from his family and home on this most special of holidays.

I figured the next time I’d be bantering with Luke would be in his DC office as he giddily showed off his latest political button acquisitions (I’m convinced he swept the votes of every antique and knick-knack dealer in the 24 parish district).

But sadly it was not meant to be.

Luke’s body had failed, but not his indomitable spirit.

On the evening Luke “slipped the surly bonds of earth to touch the face of God” words that one of his eulogists borrowed from Ronald Reagan’s moving tribute to the doomed Space Shuttle Challenger crew, a longtime co-worker called and asked me a question: do you ever remember having had a bad conversation with Luke?

After running things through my mind, the answer was amazingly no.

Now think about it: Louisiana politics is as rough and tumble as anywhere on the planet yet in the 17 years I’ve dealt with Luke I could not recall a single slight, cross word, or argument despite having been on opposite sides in every election that was important to his career, except his last when I sent over an affidavit of support the day he announced.

I bet everyone else who interacted with Luke could say the same.

And in this business I don’t know of a finer testament of character or better legacy than that.

Office 1408 will be filled by some other congressman or congresswoman but there will never be another person like our departed friend.

To borrow a Latin phrase that the Kingfish not so modestly applied to himself, Luke Letlow truly was sui generis.