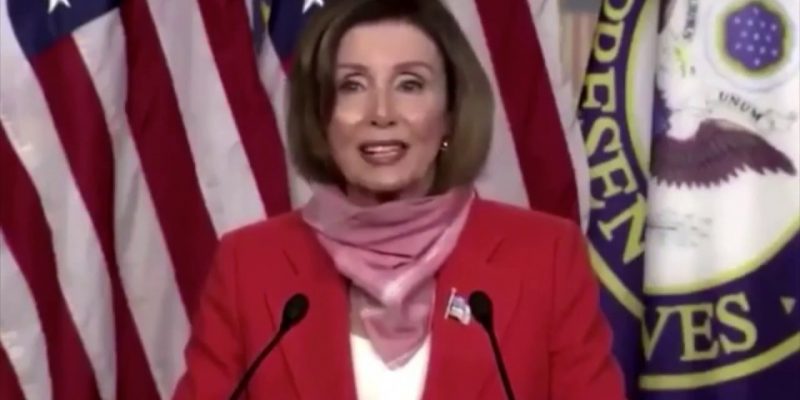 It seems that Speaker of the House Nancy Pelosi (D-CA) did not get the message of the 2020 election. Her party lost almost every heavily contested race in the last election and the Democrats now have only a razor thin majority in the U.S. House of Representatives.

Instead of moving to the ideological middle to find common ground with Republicans, Pelosi and her leadership team are moving further to the ridiculously progressive left. For example, on Friday, Pelosi introduced new rules for the 117th session of Congress. The package includes requirements that all gender specific language be replaced by gender neutral wording.

Thus, words such as “man, woman, father, mother, son, daughter, brother, sister, husband, wife” are banned and will be swapped by words such as “parent, child, sibling, spouse, etc.” Henceforth, there will be no more use of terms such as “aunt, uncle, mother-in-law, father-in-law, brother-in-law or sister-in-law.” In the view of Pelosi and the Democrats such terms are too offensive.

The proposed changes are extensive. The word “seaman” will be replaced by “seafarers.” The “Whistleblower Ombudsman” office will now be referred to as the office of “Whistleblower Ombuds.” A member will not submit “his or her resignation,” it will simply be a member “resigns.”  The rules package was also introduced by U.S. Representative, not Congressman, James McGovern (D-MA) who is the Chair, not Chairman, of the Rules Committee.

Upon unveiling the proposals, McGovern crowed that it would make “this House of Representatives the most inclusive in history.” Sorry Representative McGovern, what this package truly shows is how completely out of touch the Democratic leadership has become with the needs of the American people.

It is incredible that this committee took the time and effort to include such craziness in the rules package. In a Covid-19 world of hysterical overreaction, rampant fear, business shutdowns, electoral challenges, rising crime, and foreign threats, it is insane that Pelosi and McGovern are focused on placating their far-left wing by eliminating gender specific language.

Throughout history, words such as “husband and wife” have served mankind, sorry, humanity, sorry, the world, very well thank you. In the view of the vast majority of Americans, eliminating such terms is patently ridiculous. It is only an issue for the hyper progressive wing of the Democratic Party that also wants to totally eliminate all traditional roles for men and women. These true believers on the left want to blur any biological differences between men and women and negate the God-given advantages of masculinity and femininity.

This country is in serious trouble to have someone of Pelosi’s ideology leading the U.S. House of Representatives for another term. This change is supposedly a way to “honor all gender identities.” In fact, it is an insult to anyone that is comfortable with their gender and their gender roles. It is an example of Democratic Party groveling before a loud, but tiny, constituency, while ignoring the vast majority of Americans.

According to McGovern, this was done to ensure that in the upcoming session of Congress, House leaders “are inclusive of all Members, Delegates, Resident Commissioners and their families – including those who are nonbinary.” While this will placate a small number of nonbinary individuals who are associated with the House of Representatives, it will force everyone else to change their language.  This clearly shows how the Democratic Party does not care about the needs, values, or goals of average Americans.

This 45-page rules package was called “visionary” by Pelosi. She boasted that it included “bold reforms” that reflect the “priorities” of the Democratic caucus and embraced values such as “advancing inclusion.” The rules change will also require “standing committees to include in their oversight plans a discussion of how committee work over the forthcoming Congress will address issues of inequities on the basis of race, color, ethnicity, religion, sex, sexual orientation, gender identity, disability, age, or national origin.” The package also includes a proposal to create a “Select Committee on Economic Disparity and Fairness in Growth.”

While focusing on “inclusion,” Democrats have forgotten to include those traditional Americans who value their roles as “father, mother, husband and wife.” To these millions of Americans, such an attack on our language is both offensive and ludicrous.

Once again, the proposed rules package creates an ideal opening for Republicans to make the case that the Democrats do not represent working Americans, who are trying to pay bills and raise their families in this challenging environment. Not surprisingly, House Minority Leader Kevin McCarthy (R-CA) wasted no time in responding. He tweeted that the rules change was “stupid.” He signed the tweet as a “father, son and brother.”

For the next two years, House Republicans need to fight every progressive agenda item that the Democrats will try to promote. This will highlight the differences between the two parties and give American voters a compelling reason to give Republicans control of the U.S. House of Representatives again in 2022.

If that happens, Republicans must not squander the opportunity like the last time they wielded control. It may be their final chance to show leadership and actually follow through on their campaign promises to the American people.