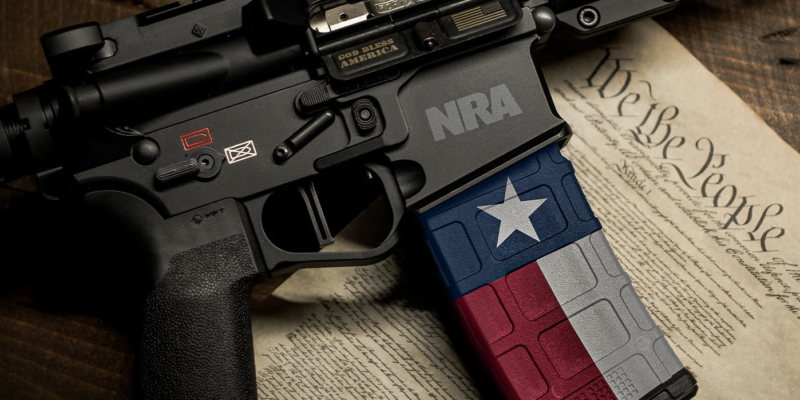 Talk about a Friday afternoon surprise.

Though the National Rifle Association’s struggles with its home state of New York are nothing new, that the NRA would restructure as a non-profit in the Lone Star State was a surprise to many observers — twin announcements which the nation’s dominant gun rights organization calls “the most transformational moment in the history of the NRA.”

“Today, the NRA announced a restructuring plan that positions us for the long-term and ensures our continued success as the nation’s leading advocate for constitutional freedom – free from the toxic political environment of New York,” said NRA’s Wayne LaPierre in a letter (see the entire text below).

Though the organization of 400,000 members is filing for Chapter 11 protections, it claims its funds are secure. It expects the transition period from corporation to non-profit org will take about six months.

International Sportsman reported the announcement comes after several years of controversy over how the non-profit organization has spent its donations — though the NRA defends the solvency of its funds. The NRA has faced legal challenges in New York due to the handling of its finances. That those legal challenges may be politically motivated is not exactly a fringe suspicion, with 16 Republican state attorneys general having taken action over the summer against New York Atty. Gen. Letitia James, a Democrat, whose goal was to dissolve the corporation entirely.

Today, the NRA announced a restructuring plan that positions us for the long-term and ensures our continued success as the nation’s leading advocate for constitutional freedom – free from the toxic political environment of New York.

The plan can be summed up quite simply: We are DUMPING New York, and we are pursuing plans to reincorporate the NRA in Texas.

To facilitate the strategic plan and restructuring, the NRA and one of its subsidiaries have filed voluntary chapter 11 petitions in the United States Bankruptcy Court for the Northern District of Texas, Dallas Division. As you may know, chapter 11 proceedings are often utilized by businesses, nonprofits and organizations of all kinds to streamline legal and financial affairs.

Under the plan, the NRA will continue what we’ve always done – confronting anti-gun, anti-self-defense and anti-hunting activities and promoting constitutional advocacy that helps law-abiding Americans. Our work will continue as it always has. No major changes are expected to the NRA’s operations or workforce.

Importantly, our plans do not impact your membership at any level.

The plan aims to streamline costs and expenses, proceed with pending litigation in a coordinated and structured manner, and realize many financial and strategic advantages.

You know that our opponents will try to seize upon this news and distort the truth. Don’t believe what you read from our enemies. The NRA is not “bankrupt” or “going out of business.” The NRA is not insolvent. We are as financially strong as we have been in years.

But they know today’s announcement makes us bigger, stronger and more prepared for the fight for freedom.

We are leaving the state of an attorney general who, just a few months ago, vowed to put us out of business through an abuse of legal and regulatory power. In fact, the gross overreach of the New York Attorney General and New York Governor has been resoundingly criticized by powerful national groups like the ACLU and a host of prominent legal scholars.

Subject to court approval, the NRA is pursuing plans to reincorporate in the State of Texas. The Lone Star State is home to more than 400,000 NRA Members and the site of our 2021 Annual Meeting being held in Houston.

Texas values the contributions of the NRA, celebrates our law-abiding members, and joins us as a partner in upholding constitutional freedom.

Under this plan, we seek protection from New York officials who illegally abused and weaponized the powers they wield against the NRA and its members. You can be assured the Association will continue the fight to protect your interests in New York – and all forums where the NRA is unlawfully singled out for its Second Amendment advocacy.

This plan represents a pathway to opportunity, growth and progress.

This is the most transformational moment in the history of the NRA. And it involves all of you.

The NRA will continue to promote its Second Amendment advocacy, sponsor firearms training, and work with its network of instructors and volunteers in furtherance of its mission. This plan actually streamlines all of the NRA’s activities and improves our operational processes.

I know we have welcomed many of you to our headquarters in Fairfax, Virginia. We have no immediate plans to relocate, but we are forming a special committee to explore our strategic options in this regard. We want to determine if there are advantages to relocating our HQ operations to another state. I have asked our leadership team to explore all options that benefit the NRA and its members.

What’s most important is leading the fight for Second Amendment freedom and serving our members. We will do that from anywhere that works best for you and for our cause.

All membership dues and financial donations will be fully dedicated to supporting our operations and public advocacy. This plan actually improves our business. It protects us from costly, distracting and unprincipled attacks from anti-2A politicians aimed at attacking the NRA because we are a potent political force. We know that the gun ban lobby will never stop – fueled by a hatred of your freedoms and by wealthy benefactors. Our plan is the best way to confront them.

We are now prepared for a better future. In fact, to me, it feels like the dawn of a new day.

We are revitalized, well-positioned, and steadfast in our commitment to fight for you. To learn more, please visit www.nra.org/forward.

Thank you for your unwavering spirit and being part of the NRA’s future. Both hold incredible promise for our country – and the freedoms in which it believes.

From the hip: The NRA, though there are more conservative alternatives in place such as Gunowners of America, is now in a place where it no longer must placate overpowered Democratic figureheads in the Empire State. If indeed this restructuring and relocation is a “transformational moment” — and not merely a survival tactic — remains to be seen. But there are few places like Texas to start anew and chart a new course.