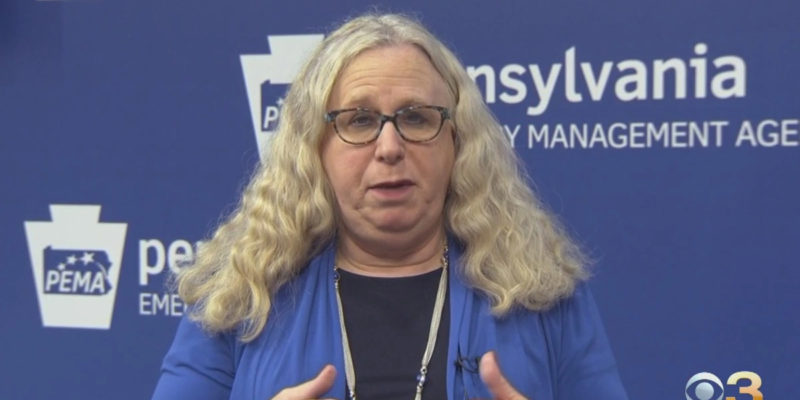 His name wasn’t always Rachel. And he became famous last year for a lot more than being a man pretending to be a woman. Rachel Levine was the nut in charge of Pennsylvania’s heath department, and that became an issue when Levine, after making the decision to stock the state’s nursing homes with COVID patients and killing thousands of people in the process, made sure to evacuate his own mother from one of them.

The health official responsible for overseeing nursing homes in Pennsylvania — where nearly 70 percent of the state’s coronavirus-related deaths have occurred — has reportedly moved her elderly mother out of a facility as deaths skyrocketed.

Health Secretary Dr. Rachel ­Levine said Tuesday that her 95-year-old mother requested to be moved out of a personal-care home, the ABC affiliate in Harrisburg ­reported.

“My mother requested, and my sister and I as her children complied, to move her to another location during the COVID-19 outbreak,” said Levine, ­according to ABC27.

“My mother is 95 years old. She is very intelligent and more than competent to make her own decisions,” Levine added.

After criticism from some state lawmakers for the move, Levine argued she’s working to ensure the health and safety of all state residents, according to the report.

In March, Levine ordered long-term care facilities in the state to continue to accept coronavirus patients who had been discharged from hospitals but un­able to return to their homes, the Bucks County Courier Times reported.

Of the state’s 3,806 coronavirus deaths, 2,611 had occurred in nursing homes and long-term-care ­facilities, according to ABC27.

This is the kind of thing which ought to kill a career as a public health bureaucrat. The overarching goal of people in the bureaucracy is to never make newspaper headlines. Once you get famous, you’re toast.

At least, that’s the way it used to be before the modern Left got in charge. Now, making the papers is a career asset, it seems.

Levine currently serves as secretary of health for Pennsylvania, and if confirmed, would become the first openly transgender federal official.

“Dr. Rachel Levine will bring the steady leadership and essential expertise we need to get people through this pandemic — no matter their zip code, race, religion, sexual orientation, gender identity, or disability — and meet the public health needs of our country in this critical moment and beyond.

She is a historic and deeply qualified choice to help lead our administration’s health efforts,” Biden said of Levine in a statement.

Everybody knows what’s going on here. If Rachel Levine was still going by Richard Levine, his resume would have gone in the Biden transition team’s round file. It isn’t that they’re averse to public health bureaucrats who kill people with incompetence or indifference, mind you, but an old white dude with a still-fresh controversy over special treatment afforded to the family while the proles choke and die in nursing homes with COVID just wouldn’t sell.

But infuse that old white dude with a nice case of gender dysphoria and give him the same name as a white girl pretending to be black, and their antennae perk up nicely. Especially when “Rachel” is following the program of doing harm while practicing the least amount of health care possible.

There should be absolutely zero chance the Senate confirms this uniquely awful choice – giving Levine a “fail up” promotion to HHS demonstrates such a contempt for the American people that, frankly, completely explains why they’ve collected some 30,000 military personnel in DC for Biden’s inauguration. You don’t assemble an army for an inauguration when you think you’re taking power legitimately – four years ago the Left rioted vigorously in Washington, burning and looting in places all around the city, and President Trump didn’t call in the military to protect him.

But four years ago, even with a man running on a specific platform of breaking from the political norm being inaugurated, there was no particular fear of the country spinning madly out of control. Trump promised change, but he didn’t promise a kakistocracy like Biden is clearly inflicting on America.

We thought of this today. It isn’t a perfect analogy for tomorrow’s “festivities,” but it’ll do.

Interested in more national news? We've got you covered! See More National News
Previous Article ALEXANDER: Hypocrisy And The Rise Of The Cancel Culture
Next Article APPEL: The Perils Of “It’s My Turn” Politics Are On Display In Louisiana