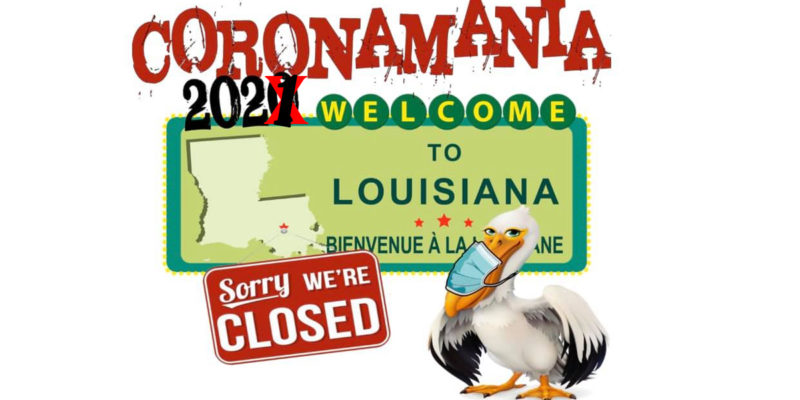 For months, the evidence has mounted regarding the impact of lockdown policies typically touted by Democrats in governors’ mansions, Edwards included, showing their marginal effectiveness in stemming the Wuhan coronavirus pandemic doesn’t compensate for their costs in human suffering. A couple of recent research efforts reinforces that point. (These National Bureau of Economic Research papers are preliminary, without completed peer reviews.)

University of Chicago economist Casey Mulligan measured the impact in terms of excess “deaths of despair,” which likely has claimed by now at least a couple of hundred Louisianans, caused by policies that restrict or shutter businesses. He discovered that these restrictions isolate people, wherein those with more fragile psyches became more likely to abuse substances and commit suicide and may account for a 10 to 60 percent increase in excess deaths nationally.

A team of researchers from Duke, Harvard, and Johns Hopkins Universities tackled a related question of how policy reactions to the pandemic regarding employment would affect in the long term mortality rates and life expectancies. Almost the entirety of the unemployment shock seen in the wake of the pandemic’s emergence would come from government-imposed lockdown policies.

They discovered that sudden negative changes in employment in the aggregate produced higher mortality and lower life expectancy in the future. Regarding the pandemic, they predict a 3 percent increase in mortality rate and a 0.5 percent drop in life expectancy over the next 15 years for the overall American population. It will disproportionately affect African-Americans and women over a shorter horizon. These figures translate into a staggering 890,000 additional deaths over the next 15 years, and obviously would go higher the longer state policy-makers persist in restricting commercial activities.

Such restrictions save lives and suffering, but, as the data show, significantly fewer and less than their side effects trigger. The sensible, science-based call would be for Edwards and any other governor or state agency imposing these to lift most, if not all, of them.

At least some Democrats in power finally are easing restrictions, at least those with the most biting ones. But that likely has less to do with the science, which has been pretty clear on this issue, and much more to do with politics.

Over a week ago, Trump left office. Given the paucity of scientific support that had gathered months ago for all but the least intrusive restrictions on populations, that these Democrats didn’t adjust policy accordingly suggests they wanted to keep restrictions in place not only to make economic conditions looks worse to enfeeble Trump’s reelection efforts, but also to increase Americans’ tolerance for government intervention and welfare payments. Then, when Democrat Pres. Joe Biden took office, lifting restrictions would make it seem Biden played a role in that, a freer economy would recover faster and more aligned with Biden’s time in office, and, they hope, more people would become addicted to government transfer payments that increases support for the redistributive agenda of Democrats.

This is the only explanation that makes sense given the science and subsequent reactions. It applies equally to the easing granted starting Friday by Democrat New Orleans Mayor LaToya Cantrell of the city’s restrictions that exceed the state’s. Maybe because only governors in states with the most severe lockdowns have lifted their extreme measures after Biden’s inauguration, putting those states on similar footing to Louisiana, Edwards has hesitated to pare any. From his partisan-driven perspective, he need not.

So, it’s all right, John Bel. Bad bogeyman gone, good “big guy” 10-percenter in, and following your agenda mostly to perfection. You can ease up now, and finally with a straight face say your pandemic policy is following the science. Lives depend on it.