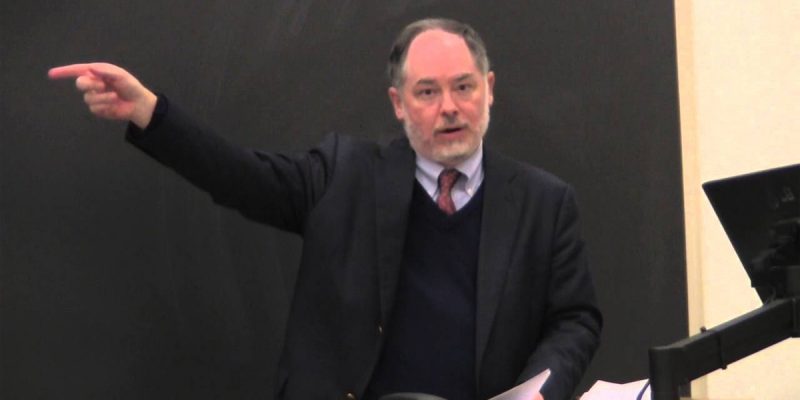 On Saturday, I was having a phone conversation with a member of the Louisiana Republican Party’s Executive Committee about Bill Cassidy. This was before Cassidy had voted to convict President Trump in the constitutionally-busted and factually-vacant impeachment Chuck Schumer and his idiot pals in the Senate had let go forward, and the question was whether the Executive Committee ought to censure Cassidy for his earlier vote that the impeachment was constitutional.

My advice was to censure Cassidy and to do it fast, because if they’d waited Cassidy was likely to vote to acquit Trump and the censure vote on a split impeachment voting record would perhaps come off as hotheaded or extreme. Censure him for that vote on constitutionality, and if he later voted to acquit, the party could take credit for having busted him and slapped him back into line.

The party, in the person of a press release by LAGOP chairman Louis Gurvich, had put out a very strong statement rebuking Cassidy’s vote but not an official censure. But the Parish Executive Committee in East Baton Rouge, which is run by long-time Republican figure and nearly-successful Senate candidate Woody Jenkins, had already censured Cassidy for that first vote and gotten national headlines for it. I said that this made it look like Jenkins, who doesn’t have much of a role in state GOP affairs these days, was the guy actually showing leadership. And I said that after Trump’s defense lawyers got going at the trial, a censure of Cassidy for that first vote would look like a reasoned decision based on watching the proceedings play out. Maybe Woody jumped the gun, but after some of the evidence popped out he would be vindicated and the state party would join in agreement.

But during this conversation, my correspondent noted something. He said “the minute we censure Cassidy, though, you can bet we’ll have the Quin Hillyers of the world come out of the woodwork to whine that we’re censuring Cassidy but we didn’t censure David Duke. And we’ll have that garbage to deal with.”

I didn’t disagree, but my response was “So what? Quin Hillyer lives in a busted time machine in which it’s 1991 all over again. Nobody cares about David Duke anymore but Quin Hillyer.”

I’m recounting this conversation because my correspondent and myself were both right.

Because today, Hillyer busted this out… 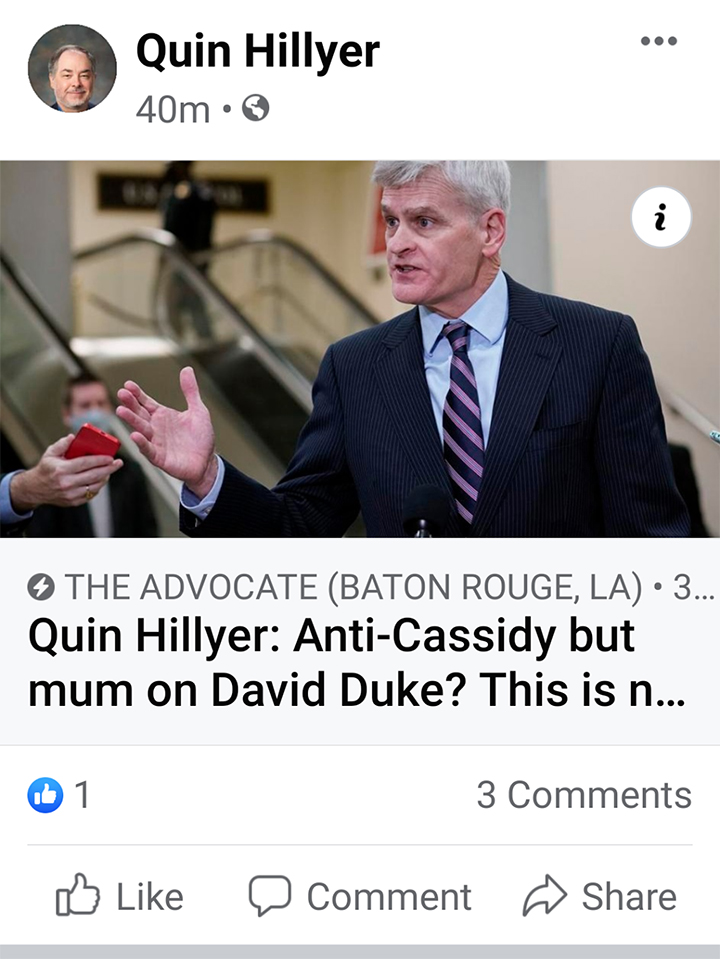 I’m not going to delve into the specifics of Hillyer’s argument. It’s boring. It’s tired. And it’s irrelevant.

And it shows how ridiculous Hillyer has become. Which is really unfortunate, because not that long ago I actually looked up to the guy as a writer and a pundit – before he went completely off the rails and became a sanctimonious, insufferable NeverTrumper. Hillyer’s stuff is now unreadable, because not only is he incapable of withholding invective against the former president but he can’t stop attacking those who voted for him.

I saw this coming all the way back in 2017, when at the first Hayride dinner we held in Metairie I put together what I thought was a pretty good lineup of speakers. We had then-Speaker of the Louisiana House of Representatives Taylor Barras, Pelican Institute president Daniel Erspamer, and Hillyer.

But when Hillyer got up to speak, he proceeded to extoll the virtues of John McCain in front of a room full of Trump donors for a full 20 minutes.

Sitting next to the podium on the dais I was busy scanning the crowd, because I was fairly sure we were going to be pelted with items from the tables. Coffee cups, forks, knives, chairs. They were not happy, and after the dinner several of them told me so.

“What the hell happened to that guy?” was the nicest response I heard.

“Don’t ever book him again,” was the most common.

Most of the feedback I received, which I agreed with and still do, is that what motivated Hillyer to ramble semi-coherently about the virtues of John McCain Republicanism was contempt for GOP voters he supposedly identifies with. What’s the point of poking a room full of almost 200 people who paid to hear you speak in the eye if it’s not to exorcise personal demons?

It’s only gotten worse since then. Hillyer, who spent his youth in Louisiana and at one time worked for the state GOP before catching on with the American Spectator and Washington Examiner – he had a brief time as the Baton Rouge Advocate’s conservative columnist, which is why they’ll bring him back occasionally as a ringer for columns like the one referenced above – has been a reliable voice in scolding Louisiana conservatives as all manner of cretins.

And the David Duke piece is his weapon of choice.

In 2019, when the slave-trading and segregationist history of John Bel Edwards’ family came up in a Washington Times piece by James Varney, something the LAGOP brought up in its messaging in response to Edwards’ accusations that Eddie Rispone was a racist, Hillyer rode to Edwards’ rescue with a vitriolic response. Guess what his argument was? A Louisiana Republican Party which had failed to censure David Duke in 1991 and 1992 when Duke wormed his way into jungle-primary runoffs for governor and senate despite the LAGOP endorsing Clyde Holloway and Ben Bagert, respectively, has no business dredging up Edwards’ racist heritage.

It’s a profoundly stupid, contemptuous argument, and it’s the only one Hillyer has. He makes it because he thinks it gives him bona fides – back then he was a young party operative and he joined the fight to stop Duke from getting elected, and thus Quin Hillyer is a Conservative Who Is Not Racist.

Then last year when the LAGOP put forth a resolution censuring Romney for his vote to impeach Trump the first time, Hillyer dredged up the David Duke crap again. Get some new material, for Pete’s sake.

We’ve talked about this kind of contempt before. It’s pervasive among the DC establishment “pet conservative” set Hillyer has allowed himself to become emblematic of. It’s the same crappy attitude toward those who share a majority of one’s public-policy views which gave us Romney calling himself a “severe” conservative and George W. Bush touting his “compassionate conservatism.”

Voters on the Right are not stupid like Quin Hillyer thinks. They recognize that contempt. And over the years of having it thrown at them they grew weary of it, which is why they opted for Trump, with fellow anti-Establishment candidate Ted Cruz as a second-place finisher, in the 2016 GOP presidential primary. That should have been a signal to folks like Hillyer that they’d busted down the legacy of Reagan to the point that it was no longer viable and new blood and new ideas needed to be injected to update conservatism. Did any of them learn? Of course not. Instead we got the Lincoln Project and Quin Hillyer’s incessant bitching about what happened in 1989.

The LAGOP could answer Hillyer by voting to censure David Duke and then also censuring Hillyer and his busted time machine from which there is no apparent escape. Or, perhaps better than that, they could ignore him altogether – because right now, Hillyer is no more relevant than Duke is. And an LAGOP which is actively promoting Claston Bernard as its endorsee for Louisiana’s 2nd District congressional race, and throwing resources behind his campaign, has nothing to apologize for on the racism front – especially when it chooses to police the idiotic behavior of a U.S. Senator who advertises that he bears its standard.