It turns out that F’King Alexander, or as he’s more formally known, F. King Alexander, the former LSU president who has now made his way to Oregon State University to ply his trade in college administration, is a cross between this guy…

The one thing you’ll never get from F’King Alexander, who by any measure was a destructively incompetent leader at LSU, hated by more or less everyone during his time here, is a recognition of his own shortcomings.

Alexander operates in an industry, college administration, which is utterly immune from introspection and individual accountability, of course. The money is too good, the work is too easy and the grift too complete for anyone to fall on his own sword or admit wrongdoing or poor judgement. Whatever you do on one of those campuses, you’d better not scare the fish away.

Except covering up your failings and mistakes doesn’t remedy them. It only makes the problem larger. So when the sexual assault scandal at LSU spread up to Kansas and claimed Les Miles career as a football coach, it was only a matter of time before the stink would travel to Corvallis, Oregon and settle in a haze upon Alexander.

He got called on the carpet up there, and it seemed for a little while like he would be cooked.

So much so that one of Louisiana’s state legislators, an Uptown New Orleans Democrat named Aimee Freeman, thought she’d take a stab at trying to get an easy win off Alexander and his hide. Freeman sent this missive up to Oregon demanding blood… 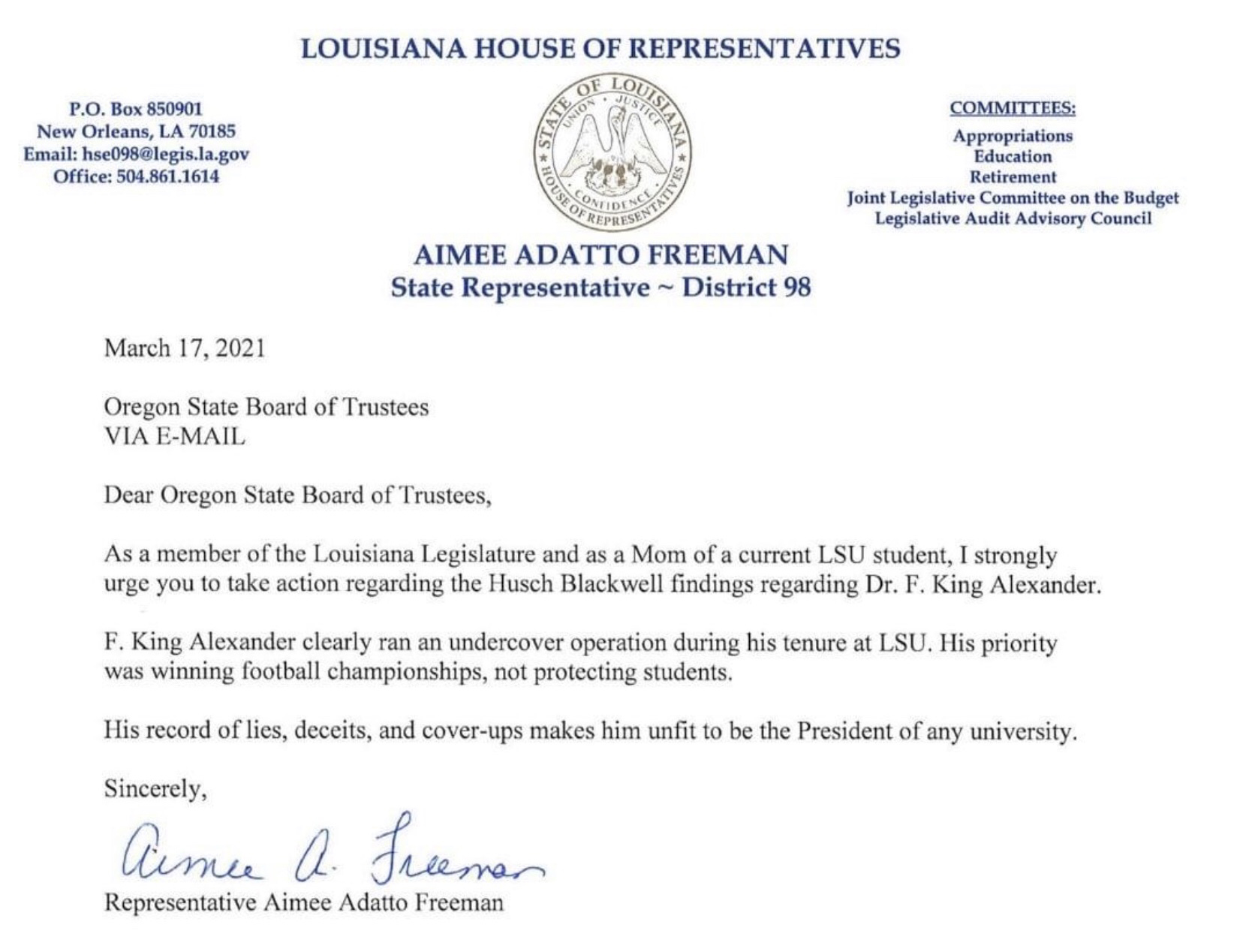 We like the short and to-the-point letters from politicians. They tend to be less monotonous.

Unfortunately, this one comes off a bit too Karen, and it doesn’t appear it had the intended effect, if any. Alexander survived with a suspension and wasn’t fired. Either the folks in Oregon weren’t impressed with being ordered around by Louisiana state legislators, or they bought into F’King’s Jake Blues/Captain Queeg act. The Baton Rouge Business Report’s Stephanie Riegel picks things up from here…

To hear Oregon State University President F. King Alexander tell it, as he fought to keep his job during a seven-hour hearing Wednesday with the OSU Board of Trustees, he was hardly to blame for the Title IX violations at LSU that took place when he was president from 2013 to 2019.

Rather, Alexander pointed fingers at the LSU Board of Supervisors and a host of other conditions that prevented him from doing more to staff up LSU’s Title IX office and provide it with the support it needed to adequately do its job when he was at the helm.

Fielding questions from OSU trustees during the remote board meeting, Alexander recounted his seven-year tenure at LSU as one spent putting out fires on multiple fronts that included fighting massive state budget cuts, “shutting down for an entire year” the toxic Greek system, battling institutional racism from the “large segment” of the LSU community that did not want him to increase diversity on campus, and navigating a culture of ingrained politics that pushed back against efforts to consolidate powerful institutions within the LSU System.

“Our community is far more advanced here than what I had to deal with at LSU,” Alexander said midway through his grilling.

In response to one of the key questions several board members asked repeatedly, Alexander said the LSU board voted in 2013, two months before Alexander’s arrival at LSU, to keep former head football coach Les Miles on the job, despite an investigation that showed his inappropriate behavior with female student workers.

“The board had already made the decision prior to my getting there,” he said. “Unlike here, there is a great deal of board intervention (at LSU) into athletics.”

Actually, the full LSU board was not aware at the time of the investigation into Miles and was never convened to vote on his tenure, a decision that would rest with the athletic director and the president anyway.

As previously reported by national media outlets, a board executive committee met with LSU athletic department administrators to decide the Miles matter, and Alexander said he was made aware of the decision two weeks after arriving in Baton Rouge.

Alexander did take credit for other actions to end sexual violence and misconduct on campus, including, as he noted twice, his decision to “shut down the entire Greek system for an entire year,” because of hazing, date rape and other problems.

“The pressure I got for shutting down the Greek system for Title IX issues was unbelievable,” he said. “It cost us millions in donations from people, who thought I was going too far.”

Alexander proceeded to blame the backwards-ass rednecks in Louisiana for all his troubles, even going so far as to say that he couldn’t fix things  at LSU because Louisiana is a “conservative state with conservative values” and he was perceived as a “liberal from Cal State Long Beach.”

Well, he certainly was that, and he certainly wasn’t respected by most people, but it wasn’t his politics that got in his way so much as his smarmy faux superiority and weak leadership. To Alexander, destroying campus institutions rather than reforming them was his way, and failing to recognize the culture here and work with it, like more successful predecessors had done, or at least show enough boldness and integrity to convince that culture to change through force of persuasion, did not work.

By the time he left it wasn’t his choice. Everybody wanted him out. He wasn’t even hired under John Bel Edwards and he was still a political liability for the governor, and Alexander knew that he either needed to take the first job he was offered or he’d be catching a severance from LSU. So he jumped to Oregon State, which is the second most prestigious college in a state smaller than Louisiana – though one far more conducive to Alexander’s academic leftism.

But the legacy he left in Baton Rouge isn’t so much the sexual assault he says he was powerless to stop, as obnoxious a lie as that is, but rather the institutionalized radicalism on LSU’s campus. Alexander ruined LSU. He’ll ruin Oregon State as well, if they’re dumb enough to keep him around.

Interested in more news from Louisiana? We've got you covered! See More Louisiana News
Previous Article GURVICH: About That Farce Of A “Debate” On WDSU…
Next Article BAYHAM: Claston Bernard Is The Congressman The 2nd District Needs