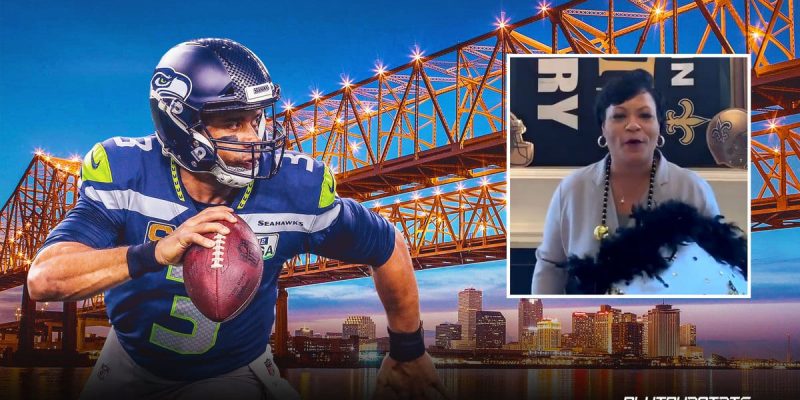 You might have heard about the great Russell Wilson controversy. It’s been illuminating – not in the sense that the Seattle Seahawks’ quarterback going to the Saints, should that happen, is any great revelation, but as yet another object lesson in the uselessness of America’s urban Democrat mayors.

It’s taken as an article of faith that soon, Saints quarterback Drew Brees is going to announce his retirement. In truth, Brees should have hung up his cleats a year ago, before he was forced by the NFL and national sports media cancel mob to prostitute himself on the altar of social justice and apologize for a perfectly defensible statement that he couldn’t support disrespect for the flag both his grandfathers fought for in World War II. Brees had his worst year as a starting quarterback in the NFL and it became quite clear his skills have atrophied to the point where he can’t effectively throw downfield anymore. Teams can lock up Saints’ receivers in press coverage without worrying they’ll have the tops of their defenses taken off now, and it was clear in the NFC semifinal game against Tampa Bay such limitations are fatal to any chance of winning a Super Bowl.

And the Saints are 8-1 over the past two years when Brees is not in the lineup, as opposed to 18-9 with him in it.

So Brees is likely done as the Saints’ quarterback, and while they’ve got a terrific team around him as of right now the Saints have a colossal salary cap problem and a number of relatively high-profile free agents they’ve got to try to sign. Shedding Brees’ salary doesn’t help that problem all that much, as some of it goes to a dead money problem which has been building.

Which means what would work for the Saints is to make a trade. They need to unload some big contracts and get something for them, and they also need a better-than-average quarterback to plug into that excellent offensive system with its quality weapons like Alvin Kamara and Michael Thomas.

Meanwhile, Wilson has grown tired of Seattle. He’s been getting beaten up behind a suspect offensive line there, and the Seahawks’ offense has consisted in no small part of late of Wilson running around for his life and improvising off the scramble. When you’re 25 that’s a lot of fun; after 30 it means a lot of Mondays spent stewing in an ice-water bath.

As such there are rumors the Saints might be willing to deal one or more players with big contracts to Seattle in return for Wilson. Which wouldn’t be a bad trade; it wouldn’t save the Saints any money on Brees’ salary but it would let Jameis Winston, Brees’ backup who’s a free agent looking for a $20 million-per-year contract, head on down the road. Wilson would seem to be a pretty good fit for the Saints’ offense and he’s a leader who’s capable of taking a team to a Super Bowl and winning.

With that as predicate, we have this idiocy.

I love you Mayor, but keep your eyes off @DangeRussWilson. His home is Seattle. #GoHawks

And so you know, Seattle is in the market for a @NBA team. Don't make me go there. https://t.co/degqE61pJJ

The default position is that LaToya Cantrell wins every one of these competitions, as it’s almost impossible to exceed her idiocy. For one thing, while it’s expected Brees will retire, he hasn’t yet. As such, as of today he’s still the Saints’ starting quarterback. And should he come back, likely with a renegotiated contract that allows the Saints’ front office to re-sign a key player or two, the reaction of the Saints’ fan base will be to go all in supporting him for that one final push to get him into retirement with a second Super Bowl ring. The chances of that might be declining, but perhaps Brees’ work ethic and his full recovery from the cracked ribs and collapsed lung he suffered at midseason might help him to recover arm strength, and so on.

And now the mayor of New Orleans is making web videos which all but shuffle Brees, one of the city’s most beloved sports heroes, out the door.

That Brees is white and Wilson black is not an insignificant fact in this. But Winston is black, and Winston has expressed interest in the job as the Saints’ future quarterback as well. Cantrell’s stupid performance disrespects Winston as much as it does Brees.

That probably cinches Cantrell as the bigger idiot of the two. At least Durkan, who has no idea about the Seahawks’ plans – the Saints aren’t the only team in the trade talks surrounding Wilson, so it’s pretty likely he’ll be playing somewhere else in the fall – is defending the status quo and not discarding her own people the way Cantrell is.

But Durkan then threatens to steal the Pelicans from New Orleans, which is stupid on multiple levels.

It’s stupid because Seattle lost its NBA team to Oklahoma City, of all places. That doesn’t make Seattle all that attractive a potential home for an NBA team.

It’s stupid because Durkan, who spent most of last year fiddling while her city burned under the thumb of Antifa and Black Lives Matter insurrectionists who even carved out a chunk of downtown as an “autonomous zone” ruled by criminals – Durkan called that anarchy a “summer of love” before the corpses piled up – is now putting herself in a position to have to build a new venue for an NBA team. There is an effort afoot to do that, supposedly with private funding, but in deep-blue Seattle the mayor is going to catch hell for chasing NBA millionaires rather than pursuing “social justice” for the poor and downtrodden.

It’s also stupid because the Pelicans are owned by Gayle Benson, who lives in New Orleans and isn’t going to move the team. Durkan comes off as ignorant by suggesting they’re obtainable. That’s not to say New Orleans doesn’t deserve to lose the Pelicans – support for the team is tepid at best, though you can’t really measure that anymore given what COVID has done to sports attendance, not to mention the fact the Pelicans might be the biggest underachievers in all of basketball – but Jenny Durkan isn’t exactly the one who’s going to steal anybody away.

Maybe the thing to do here is embrace the Left’s formulation of life and not hold a competition for Dumbest Mayor of the Week. Maybe we should just say everybody gets a trophy, and absorb the lesson that when you put stupid leftists in charge of cities you get this kind of cringe-worthy idiocy while real problems of crime, bankruptcy and infrastructure go unaddressed.