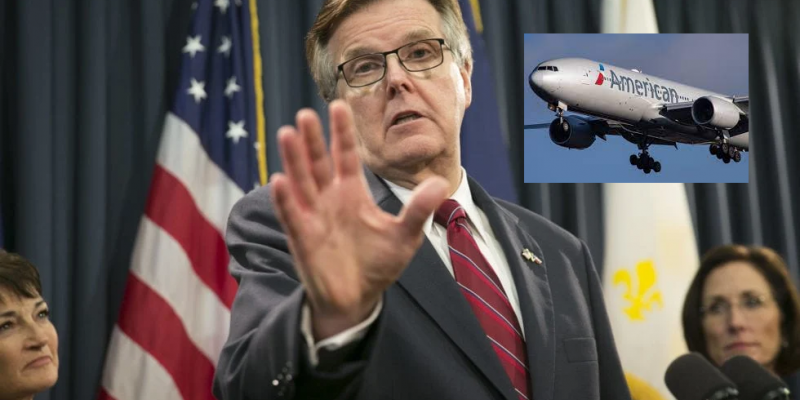 “Earlier this morning, the Texas State Senate passed legislation with provisions that limit voting access. To make American’s stance clear: We are strongly opposed to this bill and others like it,” American Airlines stated in a press release.

Dell Technologies CEO Michael Dell took to Twitter to retweet an opposition statement by the left-leaning Business Roundtable, a coalition of corporate CEOs.

On that same day, The Hayride published a look into big business’s relationship to liberal causes and why they and partially taxpayer-funded convention center bureaus have developed a tendency to horn in on political topics that have little or nothing to do with their particular industries or bottom lines. A similar dogpile is taking place in Georgia.

Patrick’s statement is below:

“As Lt. Governor of Texas, I am stunned that American Airlines would put out a statement saying ‘we are strongly opposed to this bill’ [Senate Bill 7] just minutes after their government relations representative called my office and admitted that neither he nor the American Airlines CEO had actually read the legislation.

“We heard these same outcries claiming voter suppression in 2011 when Texas passed the photo voter ID bill. In fact, just the opposite occurred. Voter turnout in Texas soared from 7,993,851 in 2012 to 11,144,040 in 2020, a 39 percent increase. Gubernatorial election voter turnout has increased by 76 percent since photo voter ID was passed.

“Texans are fed up with corporations that don’t share our values trying to dictate public policy. The majority of Texans support maintaining the integrity of our elections, which is why I made it a priority this legislative session. Senate Bill 7 includes comprehensive reforms that will ensure voting in Texas is consistent statewide and secure.

“By the way, this is the same American Airlines that in 2017 led the fight to try to force us to allow boys to play girls sports in Texas and take away their scholarships. They are probably still fighting for that today and it is likely they have not read Senate Bill 29 either.”