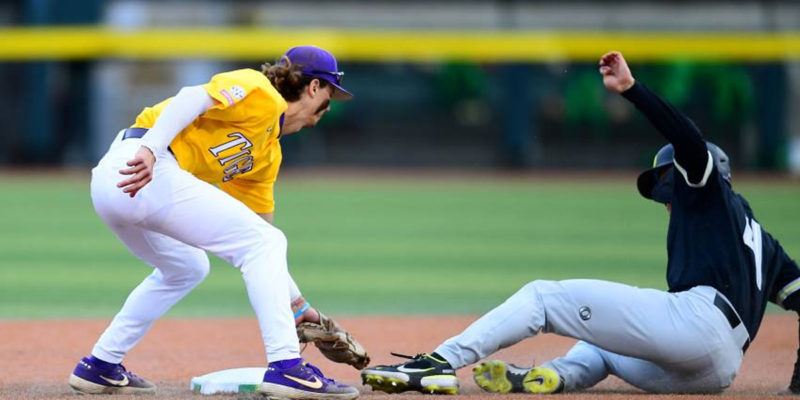 …a little bizarre for anybody who’s watched this LSU baseball team this year.

It isn’t unprecedented for a team which struggled during a season to catch fire in the playoffs and go somewhere. For example, in 2015 the University of Virginia struggled through a season which saw them lose 24 games, including a 15-15 record in ACC play, and barely made the NCAA Tournament as a 3-seed. But then the Cavaliers got hot in the postseason and won the whole thing with a rather pedestrian 44-24 final record.

LSU’s record in the SEC this year was a pathetic 13-17, which was the worst conference mark by an LSU baseball team since 2011, when Paul Maineri’s 5th Tiger team didn’t even make a regional with the same record. Interestingly enough, that team was 36-20, which was a better overall record than this one (the Tigers are currently 38-23 after going 4-1 in the Eugene regional and o-1 at the SEC Tournament in Hoover). It’s not unreasonable to say that of all of Mainieri’s teams which have made the postseason, of which there have been 11, this might be the worst one.

And yet they’ve managed to outstrip the achievements of the 2010 team, which lost in the UCLA regional that year, and the 2014 team, which was shocked by Houston at Alex Box Stadium in a year lots of people thought could have ended with the Tigers winning it all.

This is the ugly duckling of Mainieri’s teams.

It has a different feel, obviously, because this is Mainieri’s last year. A couple of weeks ago he announced he’d be retiring at the end of the season, something which surprised nobody. The coach has been dealing with persistent neck pain and migraines, and the toll those have taken on his 62-year-old body is obvious. To watch Mainieri in the dugout is an exercise in sadism, almost, as he’s clearly wracked with stress and discomfort.

And frankly, it has shown in his coaching.

Mainieri’s last few years, particularly, have demonstrated him as a coach desperate to do something great. He makes broad leaps in game management and strategy which don’t fit moments, and he plays hunches which don’t seem sound.

Monday’s 9-8 win over Oregon was a good example. LSU won one of the most dramatic and fun-to-watch college baseball games in recent years, and the outcome is without a doubt gratifying to those of us who would like to see him go out in as successful a fashion as possible. But to say his strategic moves in that game made sense would be charitable in a fashion no responsible analyst would agree to sanction.

Mainieri started Ma’Khail Hilliard, who has been hot down the stretch of the season. Hilliard had pitched on Saturday, but he’d thrown a somewhat-economical 65 pitches. You obviously wouldn’t leave him in too long, but if you’re going to start him he might have a little bit of gas in the tank.

Mainieri pulled Hilliard after an inning where he threw just 14 pitches and gave up only one baserunner and no runs. Then he brought in freshman Ty Floyd, who’s been a late-inning reliever all year. Floyd entered the game with a two-run lead and proceeded to give up a pair of runs to tie it before he seemed to settle down.

Then Floyd came out of the game for the third inning. In went freshman Michael Fowler, who has pitched all of 17 innings this season, almost all of which came in midweek games against in-state schools. Fowler gave up two more runs in his first inning of work, then another run in his second. He left the game with LSU down 5-2 after four innings.

At this point it was worth wondering why two of LSU’s frontline pitchers had worked an inning apiece and a barely-used freshman had worked two. Obviously the strategy hadn’t worked.

Then Mainieri replaced Fowler with Will Hellmers, a freshman who had been LSU’s midweek starter all season and who had a 6-2 record on the year. Hellmers was the pitcher most of the fans thought would start the championship game against Oregon, and he showed why when he went out to pitch the fifth inning. Hellmers blanked Oregon in the fifth and sixth innings, and looked like he was on cruise control. In fact, when he left the game LSU had clawed their way back from 5-2 down and had a 6-5 lead on Oregon.

Then, for some inexplicable reason, Mainieri took Hellmers out. He replaced him with freshman Garrett Edwards, who had been suffering from arm soreness at the end of the season and had already worked during the Eugene regional. And after a runner reached base on an error, Edwards gave up a two-run home run which put LSU behind 7-6.

Edwards is going to be very, very good before he’s done at LSU. But it’s hard to understand why he was a better choice than Hellmers in the 7th inning of that game.

Edwards then gave way to Landon Marceaux, LSU’s ace, who came out after having thrown 101 pitches in a losing effort against Gonzaga on Friday. It was always going to be a very finite amount of work Marceaux could offer in that situation; you’d think you’d need at least the 8th inning before he was a responsible option. Especially with closer Devin Fontenot having already thrown nine pitches on Saturday against Central Connecticut State and 37 more on Sunday against Oregon; Fontenot wasn’t going to be able to give you more than an inning at most.

But with Marceaux on the mound it worked 0ut. He threw two and a third innings and gave up four hits, but allowed only one run in the ninth inning that he could afford to give up – LSU was ahead 9-7 at the time – and then shut the door on Oregon in the clutch.

You got the impression Marceaux was surviving on pure guts. Kind of like Mainieri, who has been limping through this final season, in physical discomfort and psychic malaise owing to the loss of his father Demi Mainieri, the hall of fame coach at Miami Dade College, as well as others (like Tommy Lasorda) who helped to shape him, in the past couple of years. LSU’s coach simply doesn’t look like somebody who enjoys the game anymore, and frankly that seems to rub off on his team. The Tigers seemingly can’t help themselves but to make fielding errors, baserunning mistakes, bad decisions at the plate…it all seems like they’re pressing, as though they recognize the burden it is to be entrusted with the tradition of LSU and don’t see themselves worthy.

This team has found a way to a super regional, and yet they come off as interlopers. Almost as a fraud in those uniforms.

Which is strange, because the talent and resumes aren’t lacking.

LSU was a top 10 team in the preseason. Its freshman class, including Edwards, Floyd, Hellmers, Javen Coleman whose stellar pitching won the Sunday night game over Oregon which set the stage for Monday’s dramatic win, plus the batting genius of Dylan Crews and Tre Morgan, is one of the best in school history – and whoever Mainieri’s replacement might be is very likely to ride that class to glory in Omaha – perhaps the national championship which has so tantalizingly eluded Mainieri since he won his first ring in 2009.

And the Marceauxs, Gavin Dugases, Cade Doughtys and others on this team look like championship players. At least, at times they do. They did when it was needed on Monday night.

This is a team which, especially had superstar pitcher Jaden Hill not gone down to an arm injury early in the season, would be anything but an interloper at the super regional level. It has talent. It is not bereft of opportunities this weekend in Knoxville against national #3 seed Tennessee. LSU lost three games in Knoxville early in the season, but two of them were one-run losses in late-inning debacles. Things could easily have gone the opposite way, and if they had this past weekend might well have been played in Baton Rouge rather than Eugene.

That is, of course, how things go in baseball. And if the fortunes were to turn the opposite way and LSU was to outlast the Vols on the way to Omaha, it really wouldn’t be a huge surprise.

But even if that happened, it would still likely be seen much in the way of this weekend’s heroics – one more near-death experience for an LSU team which is surviving despite itself amid the psychodrama of Mainieri’s raging against the dying of the light.

As a fan, it’s impossible not to join in cheering, Dylan Thomas-style, as the coach and his players battle on against the odds. Still, one wonders what this team and this coach could do were it not for the burden and the baggage of Mainieri’s coaching denouement.