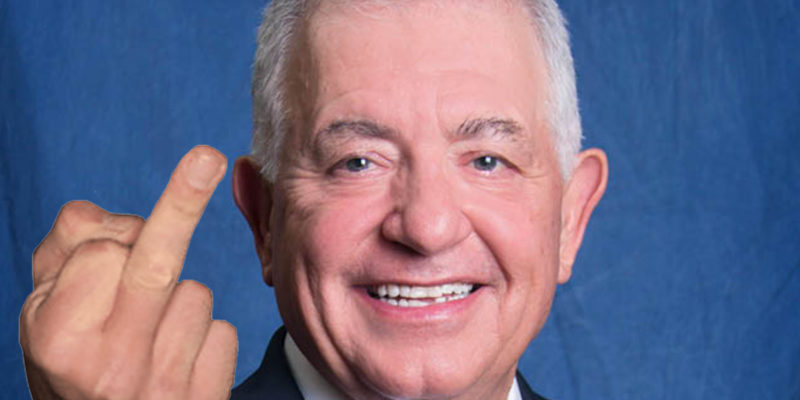 They waited until Friday, when everybody had pretty much packed things up for the week, before John Bel Edwards and his administration let out the news nobody thought was surprising. Ronnie Johns is your new Grand Poo-Bah of the casino gaming board, plebes! Give the new “made man” his due.

Ronnie Johns says he has resigned his seat in the Louisiana Senate, where he has represented District 27 since 2012, in order to accept an appointment from Governor John Bel Edwards as the Chairman of the Louisiana State Gaming Control Board.

“It has been my honor to serve the citizens of District 27 as their senator for almost 10 years,” Johns said. “I am grateful for the trust they placed in me and I want them to know this new position will allow me to continue serving them, just in a different way. The gaming industry plays a vital economic role in Southwest Louisiana and across the state. Gaming is the largest single private industry source of revenue for the state budget. This new position will give me the opportunity to work with the State Gaming Control Board, elected officials and industry representatives to ensure the integrity of gaming in Louisiana. I am humbled and appreciative for being entrusted with this responsibility.”

“Sports betting was just approved by the state legislature in the session that ended in June. One of my first responsibilities as Chairman will be to promulgate all the regulations for this new gaming program in the state,” Johns said.

Johns previously served in the Louisiana House of Representatives from 1996 to 2008. He was elected to the State Senate in 2012 and has served continuously since then. He is a member of the Board of CHRISTUS Health Southwestern Louisiana and also the Board of the Metanoia Foundation, which is dedicated to helping adolescent victims of human trafficking.

Johns has received numerous awards during his legislative career, locally, state-wide, and nationally. In September 2016, he was recognized in Washington, D.C. by the Congressional Coalition on Adoption Institute as an Angel in Adoption for his work on behalf of foster children and adoptive parents. He was also recognized by the United Way of Southeast Louisiana as a Legislative Champion for Public Policy for his extensive work on the tragedy of human trafficking.

“I am excited about this new opportunity to serve our state in a broader capacity,” Johns said. “I will miss working with my fellow members of the state legislature and extend my gratitude to all of them for their service and friendship.”

Johns says he will assume his new position as Chairman of the State Gaming Board immediately.

It’s almost like a scene from Prizzi’s Honor or the Godfather movies. All Johns had to do in order to merit that cush $180,000 per year do-nothing job running the gaming board was knife his constituents in the back by ditching the veto session at which 31 of Edwards’ vetoes were subject to an historic overturn, and the world would become his oyster.

Or at least, comped hotel rooms and free buffet tickets, not to mention VIP passes to KC and the Sunshine Band at the Golden Nugget.

How can Johns assume his new job immediately? Didn’t he tell us that he couldn’t attend the veto session last week because he was laid up with knee surgery and he couldn’t go anywhere for four weeks?

Guess he made a magical recovery once the stress of doing his old job had passed.

If you don’t recognize this colossal middle finger in your face, you are most definitely not paying attention. Ronnie Johns has so much contempt for you suckers it’s not even funny.

And it really isn’t funny.

He’s like so many of the scumbag politicians plying their scumbag trade at the Capitol. They might talk a good game, though most of the time it really isn’t that hard to spot them for who they are, but at the end of the day what these guys are there for is to go to parties lobbyists put on, and get bribed. You don’t really think these guys sign up for $16,800 a year not to pull something down on the back end, do you?

There are some members of the legislature who are actually up there with legitimate motives. Really, there are. And God bless them.

Some of them, perhaps to include Ronnie Johns – we don’t know and at this point it really doesn’t matter anymore where he’s concerned – went to Baton Rouge with the best of intentions and a desire to reform this state. And once they showed up and saw the sausage being made, they decided it was too hard to make this place better. Rather than reforming the status quo, the status quo reformed them.

And John Bel Edwards is the most corrosive influence in Louisiana politics in 40 years. He’s even more corrosive than Edwin Edwards was in his failed third and fourth terms as governor. It’s nothing at all for him to corrupt a weak man like Ronnie Johns.

It would be interesting to go back in time to 1995 and tell Ronnie Johns that at the end of his run as a legislator he would be ditching votes on election integrity and stopping men from playing women’s sports, lying about a medical infirmity as a cover, to earn a mobbed-up position in a corrupt Democrat governor’s administration. One wonders what he would have said to that suggestion.

“No way,” would be our bet. He might even be insulted at the suggestion. But now he’s beyond insult.

There is some hope here, though. Because Johns is gone, and we’re at least spared two more years of weakness and corruption from him. And there is already the prospect of something a whole lot better.

Stine, a native of Calcasieu Parish, is the Marketing Director for Stine Lumber and the President of Alliance for Positive Growth. Stine has dedicated his life to promoting, advancing, and advocating for Southwest Louisiana.

“Following Hurricane Laura and Hurricane Delta, I witnessed firsthand the resilience of Calcasieu Parish. As a community, our strength was tested, but we rallied together to selflessly serve one another. I’ve been in the trenches with you, and I’m ready to continue fighting for our community in Baton Rouge,” said Jeremy Stine.

“It’s time to usher in a new generation of leadership that will do what is right for our community and fight to rebuild Calcasieu Parish, better than ever.”

Visit www.JeremyStine.com to learn more about his campaign to rebuild Calcasieu Parish, better than ever.

Jeremy was born and raised in Calcasieu Parish. From a young age, Jeremy learned from his grandfather and father the important values of hard work, service, community, and faith. In high school, Jeremy worked from the bottom up, learning each department in the family business, Stine Lumber, which is based in Sulphur, Louisiana.

Jeremy currently serves as the Marketing Director for Stine Lumber. As Marketing Director of a company with over 850 team members and $300 million in revenue, he is responsible for the overall vision and execution of Stine’s business and marketing strategy, which includes online marketing and e-commerce.

Immediately after the catastrophic storms of Hurricanes Laura and Delta, Jeremy turned to social media to help lead the charge to organize food distribution locations for area workers and citizens by providing thousands of daily meals for weeks at a time.

As President of the Alliance for Positive Growth (APG), Jeremy used his role to amplify the voice of many Southwest Louisiana business leaders and citizens. Under Jeremy’s leadership, the nonprofit shed light on the lack of immediate relief to the Southwest region following both Hurricanes Laura and Delta. Their efforts rallied the community to urge the President and Congress to pass disaster relief funding.

As a devoted Christian, husband, and father, faith, family, and community are at the center of Jeremy’s life. He and his wife, Emily Stine, are raising their three young children in Lake Charles, where they worship at the Cathedral of the Immaculate Conception.

We’ve known Jeremy for a long time, and three things are true about him.

First, he’s a hell of a lot smarter guy than Ronnie Johns ever was. Stine is a lot less likely to be led around by the nose by the Usual Suspects at that Capitol.

Second, Jeremy Stine is not a RINO. He’s legitimate. He’s tactful and he isn’t a particular bomb-thrower, but he has principles and he’s a conservative.

And third, Stine doesn’t need to slurp at the trough, because he’s got that family business that earns him a good living. He doesn’t need to compromise his values and drop a big fat F You on the voters to earn a job on the gaming board or some other sleazy sinecure.

Qualifying for the race to replace Johns will end on Friday. We’ll see who else gets into that race, but it would be a surprise if any of them can beat Stine. And by the next time the legislature meets the Senate will have gotten a great deal better.

Interested in more national news? We've got you covered! See More National News
Previous Article SADOW: How The LAGOP Can Leverage The Veto Session Loss Into Victory
Next Article ROBICHEAUX: John Bel’s Not Going Anywhere, And Neither Is Billy