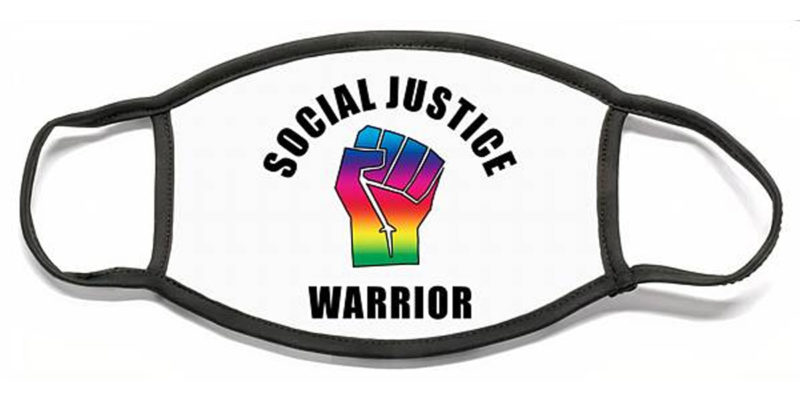 I was struck by the hypocrisy of something last week that may provide context for the cultural turmoil occurring in our country: while I fervently hope not, we may be headed for yet another period of masking, social distancing, and lock down due to a variant of the COVID virus.

As an aside, I admit I remain confused: first we were told not to bother wearing a mask, they don’t work; then we were told to wear two masks, then, to get the vaccine and you don’t have to wear a mask; now, we’re told to forget the earlier advice and wear a mask even though vaccinated people are beginning to get, and become, COVID positive again with the second variant.

In any event, we were locked down last year and may be headed to a closed COVID society again with the Biden Administration threatening to go door to door to force us to be vaccinated.  Yet, we simultaneously have a wide-open national backdoor—our porous southern border across which thousands of illegals pour weekly carrying the virus itself—or other diseases—drugs, guns, weapons, women and children in human trafficking, and terrorists.

A wide-open border, a closed COVID society and a government going door to door to enforce new guidelines that have been in constant flux and change since the pandemic began.

Do you see the jarring hypocrisy here?

If you’re a vaccinated American citizen not wearing a mask in the Capitol, Speaker Nancy Pelosi will have you arrested.  However, if you are a COVID-positive illegal immigrant at the border you are allowed entrance and put on a plane to some American city.  This anti-science ideology being forced on Americans, but from which illegal aliens are exempted, is a lack of will to control, for political advantage, our southern border.

No nation can be a sovereign if it cannot control its own borders.  And yes, while we are undoubtedly a nation of immigrants, the large majority of our ancestors came into the country legally; they assimilated into their new country and culture, learned the language, and proudly thought of themselves as Americans.  However, the cultural and health assault at the border is every bit as perilous as any other national security threat posed. We not only don’t know all who are in our country, many we have identified either have no intention of assimilating, at the least, or, at the worst, may plan us harm.

This prompted me to consider the broader cultural attack on our country.  As Americans—due to Political Correctness and the Cancel Culture—we have allowed ourselves to be bullied into accepting certain “received” Leftist truths that are not true at all.  Here are a few:

We are supposed to accept as “enlightened” and “open minded” that biological boys and men who “identify” as girls and women should be allowed to compete in sports and athletics against biological girls and women.  Or ignore that the surgery and hormone treatment required during “transitioning” is terrible for the human body.  It is, and it’s criminal for parents and doctors to suggest it to children.  While there may be a thousand mental disorders, there are two genders, assigned at birth by nature.

We are supposed to accept that there is nothing abnormal about Drag Queen hour at the local library during which drag queens read stories to children.  These “readings” are not teaching acceptance of anything.  They objectify weirdness and cause confusion.  Or believe that Defund the Police is a sane idea that does not create the greatest harm in the most vulnerable communities—poor Hispanic and black communities.  Or that, for a few weeks after the death of George Floyd, the country was almost completely united about the need for concrete police reforms but that Black Lives Matter, an avowedly Marxist, Leftist, America-hating organization, has co-opted and stolen the movement.  You can strongly support police reform and not support BLM.

Or that when you hear the phrase “Black Lives Matter” it’s OK to wonder if all black lives matter because the false media narrative is that the killing of black people by police is the greatest problem of all.  It’s not.  Only a fraction of black lives lost annually in this country are the result of police violence. (When it does occur those individuals should be tried, convicted, and punished – and that is what is happening).  However, the overwhelming majority of black lives lost in America every year are the result of black-on-black crime in the inner cities, and abortion.  More black babies are aborted in America every year than any other race.  What about those black lives?

Further, so-called cultural “appropriation” is killing comedy, theater, movies, and art.  These tactics are as antithetical to the inspiring, emotive, creative nature of art and entertainment as is their goal to limit such roles to a particular type of individual or group.  I thought empathy and the desire to understand other cultures was a shining trait of liberalism.

This is the same reason Critical Race Theory (CRT) is poison.  Based entirely upon “identity” politics, CRT seeks to categorize and resegregate us solely by race (after decades of efforts to desegregate us) as though no individual, through hard work, God-given ability, and persistence, can ever overcome their race, upbringing, or the circumstances of their birth to achieve great things when the very history of our country directly refutes that toxic premise.  Swept away by CRT is Dr. King’s hope: “I have a dream that my four little children will one day live in a nation where they will not be judged by the color of their skin but by the content of their character.”

Or the tearing down and destroying of statues and monuments.  This whitewashing of history is a terrible thing to do not least because erasing our history—especially the worst, most evil parts of it—will insure it will be forgotten, making those very evil acts more likely to occur again.  Or the effort by the Left’s Stalinist Thought Police to outlaw and scorn the use of certain words.  This does a grave disservice not only to our personal liberties, which prominently include the freedom to express ourselves, but moves us toward the criminalization of speech and, ultimately, thought.

Or the mocking of God, faith, or spirituality as being silly, naïve, odd, or akin to believing in a fairytale; like using an old-fashioned home remedy in this scientifically and medically “advanced” age in which we live when those of us who are believers know that the only lasting “medicine” we can rely on is our faith and prayers.

We must speak out against these attacks on our nation’s history, culture, and tradition.  Please resist these false narratives.  Let’s stop this purge. It will take courage, but we have a sacred obligation to do so, no less than those Soldiers, Sailors, Aviators and Marines, Freedom Fighters, and Civil Rights Activists, who died or were grievously wounded giving us these historically rare rights and freedoms, for which they often paid with their lives, that “last full measure of devotion.”