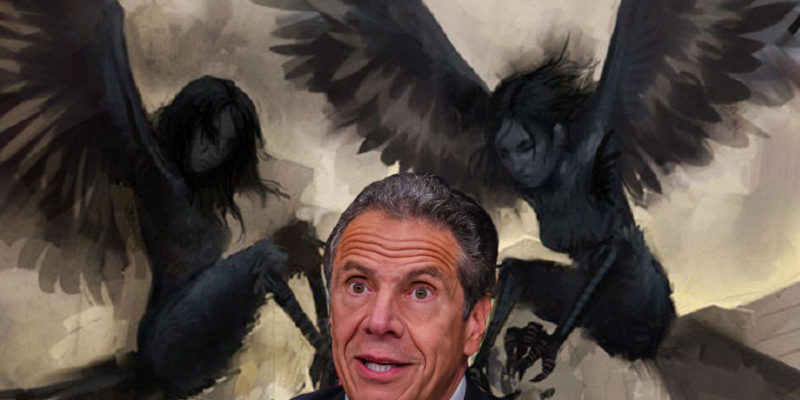 “Bird-bodied, girl-faced things they (Harpies) are; abominable their droppings, their hands are talons, their faces haggard with hunger insatiable”
– Virgil

When finally alone spasms of agony roiled his body. He was the King after all, the King that knew no challenge. But now by his own actions having unleashed the Harpies they set upon him. These indistinguishable creations of his mind devoured his soul and tore at his self-confidence. With talons of steel, they left him helpless, these beautiful young women from Hell.

Yet after all it was his own deeds that had opened those Gates to Hell and allowed the glittering avians to escape. He the mighty one among the masses, he who held power so dear, had let his own sense of immortality blind him to the dangers that lurk within the hearts of men. He, who feared no person, brought low by the words of brave young women who saw in him bluff and shallowness and in doing so lost their fear of him.

Agonizingly he cries out in trepidation, what will become of the King? Cuomo, the Lord of millions thrown down from his throne and beset upon by the Harpies that come in the night. Cuomo, the King who though favored above all men, was destroyed by his own arrogance.

Had he ruled a millennium ago perhaps he could have found refuge in his own power. Banishment for those who decried his actions, or worse. A quick end to turmoil with a quick end to those who would challenge his will.

But this is here, and this is now. And like all men, Cuomo must seek solace in sleep at night. Yet in the darkness of his own silent retreat the Harpies come. No blood, no gore only the searing pain of what was and what could have been.

Interested in more national news? We've got you covered! See More National News
Previous Article GARLINGTON: A Canary In The COVID Coal Mine
Next Article Bill Cassidy Ought To Serve Out His Term And Then Never Show His Face In Public Again