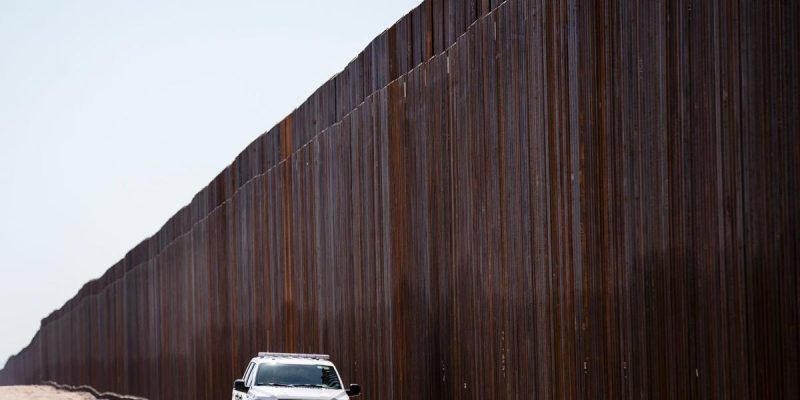 People of all religious faiths should support a strong national border. Christians certainly should, but when we do so today, some liberals who advocate for open borders and defunding ICE (U.S. Immigration and Customs Enforcement) cite particular Bible verses out of context to claim we are being “unfaithful” in opposing their radical ideas. It has become increasingly important for us to set this record straight.

Perhaps the verse most often cited by the Left is Leviticus 19:34. Whether they know it or not, that passage happens to be from the instructions Moses delivered to the Israelites when they were on their journey through the wilderness in Sinai (before they reached their own Promised Land). The verse reads as follows: “But the stranger that dwelleth with you shall be unto you as one born among you, and thou shalt love him as thyself; for ye were strangers in the land of Egypt: I am the LORD your God.” (KJV)

It is, of course, a central premise of Judeo-Christian teaching that strangers should be treated with kindness and hospitality. We are each called to love God first and to love our neighbors as ourselves (Deut. 6:5, Lev. 19:18, Matt. 22:36-40, KJV). However, that “Greatest Commandment” was never directed to the government, but to INDIVIDUAL believers.

The Bible teaches that God ordained and created four distinct spheres of authority— (1) the individual, (2) the family, (3) the church, and (4) civil government—and each of these spheres is given different responsibilities. For example, while each INDIVIDUAL is accountable for his or her own behavior (e.g., Exodus 20), the FAMILY is commanded to “bring up children in the training and instruction of the Lord” (Eph. 6:4) and “provide for their relatives” (1 Tim. 5:8). The CHURCH is commanded to make disciples and equip people for the work of the ministry (Eph. 4:11-13), and the CIVIL GOVERNMENT is established to faithfully uphold and enforce the law so that order can be maintained in this fallen world, crime can be kept at bay, and people can live peacefully (Romans 13).

To be properly understood, anytime a command is given in Scripture, one must first determine to WHOM that command is directed. For example, when Jesus taught us as His followers to practice mercy and forgiveness and to “turn the other cheek” (Matt. 5:38-40, KJV), He was not giving that command to the government. To the contrary, when government officials ignore crime, they are directly VIOLATING their responsibilities before God. Indeed, the civil authorities are specifically charged to do justice, to ”bear the sword,” and to serve as “the minister of God, a revenger to execute wrath upon him that doeth evil” (Rom. 13:1-4, KJV). As the Bible warns: “When a crime is not punished quickly, people feel it is safe to do wrong.” (Ecc. 8:11, TLB)

Read in its context, the passage in Leviticus 19 makes perfect sense. Showing love and kindness to a stranger was not a command given to civil government, but instead to individual believers. That same principle is emphasized in the New Testament. When Jesus spoke of embracing, caring and providing for “the least of these” (E.g., Matt. 25:31-40), His instruction was given to His disciples, and not the local authorities. The Bible is clear that Christians should practice personal charity—but also insist upon the enforcement of laws (like our federal immigration statutes) so that “every person is subject to the governing authorities” and “those who resist incur judgment” (Rom. 13:1-2).

Many on the Left today, and even some at the highest levels of our government, consider themselves “globalists” who envision a utopian world order where there are no borders between countries at all. Their fantasy will simply never be realized because God has not ordained it, and their basic premise (that man is inherently good and perfectible on his own) is the opposite of the Biblical truth that man is fallen and in need of redemption that is available only through salvation in Jesus Christ.

The Bible speaks favorably and consistently about distinct nations of people (see, e.g., Gen. 18:18, Num. 32:17, Psalm 67:2, Matt. 28:19, Rev. 5:9, 7:9, NIV), and about borders and walls that are built to guard and secure people, property and jurisdictions (see, e.g., Deut. 19:14, 27:17, 32:8, Acts 17:26, NIV). When Nehemiah heroically led the Jewish remnant to rebuild the walls of Jerusalem after their enemies had destroyed them, he was doing the noble work of God (Neh. 1-6, NIV). Maintaining a secure border is not an offensive measure, but a wise, defensive one to safeguard innocent life. As Rev. Franklin Graham once summarized, “Why do you lock your doors at night? Not because you hate the people on the outside, but because you love the people on the inside so much.”

FROM CRISIS TO CATASTROPHE

Right now, because of the destructive policy choices and executive orders of the Biden Administration, America is facing an unprecedented humanitarian, health and national security disaster at our open southern border. It is no longer just a crisis, but a catastrophe. Not only are people from more than 150 countries currently flooding into the U.S. illegally, so are many tons of deadly narcotics like Fentanyl. Cartels and human traffickers are having their way and making huge profits, and violent criminals are being let loose into our country. Record numbers of unaccompanied migrant children are being apprehended on U.S. soil (19,000 in July alone!), and many are tragically abused on the treacherous journey before they arrive.

Our U.S. Border Patrol has encountered more than 1 million illegals along our open southwest border so far this year (but the actual number of people who have come across undetected or evaded capture is likely twice that high). Pursuant to the Biden “catch and release” executive order, migrants who are apprehended are not sent home but merely distributed (at the expense of American taxpayers) throughout the U.S. Our local communities and Christian charities are being overwhelmed, especially in the midst of the pandemic. Approximately 40 percent of these illegal migrants are being released without a COVID test at all, and many are clearly infected. (For example, the city of McAllen, TX has had more than 7,000 COVID-positive migrants released there since February alone.)

Anyone who crosses our border illegally is supposed to at least be given a notice to return later for a court hearing to adjudicate any claim they may have to remain in the U.S. as an asylee fleeing physical danger in their home country. However, many are being released now without a court notice, and because there is a current backlog of more than 1.3 MILLION cases to be heard, the average wait time to see a judge is approximately four YEARS! Only 12-15 percent of the people crossing the border are determined later to actually qualify for asylum, because the vast majority of people come here for economic reasons only. All of those individuals are free to pursue a course of legal immigration to our country, but we cannot allow them to simply ignore our laws.

(I have filed legislation every year since I got to Congress in January 2017 to fix the asylum backlog problem. We came very close to getting it passed in 2018, but now the Democrat Majority refuses to allow a vote on the reforms.)

Due in large part to our Judeo-Christian foundations and the deep religious heritage we enjoy in this country, America is the most benevolent nation in the world—by far. However, we cannot maintain that strength and generosity if we surrender our own safety and sovereignty. Preserving law and order and securing our borders should not be partisan issues, but matters of common sense. These are certainly responsibilities fully authorized by the Bible—and expected of us by God.

Any time liberals attempt to bolster their “open borders” agenda by citing Scripture out of context, they should be kindly corrected with the facts (2 Tim. 2:24-25). Christians are called to love unconditionally, serve selflessly, and defend the defenseless. We are also called to stand for, and work to ensure, just government. Justice and mercy are not mutually exclusive pursuits. To the contrary, God specifically requires His people to practice both (Micah 6:8). Despite the unfounded claims of the Left, supporting a strong national border is a very Christian thing to do. The Bible says so.

Interested in more national news? We've got you covered! See More National News
Previous Article It Looks Like We’ll Have To Be Satisfied With Half-Measures In The LA Legislature
Next Article SADOW: Parents Must Protect Kids From Edwards’ Abusive Mask Order