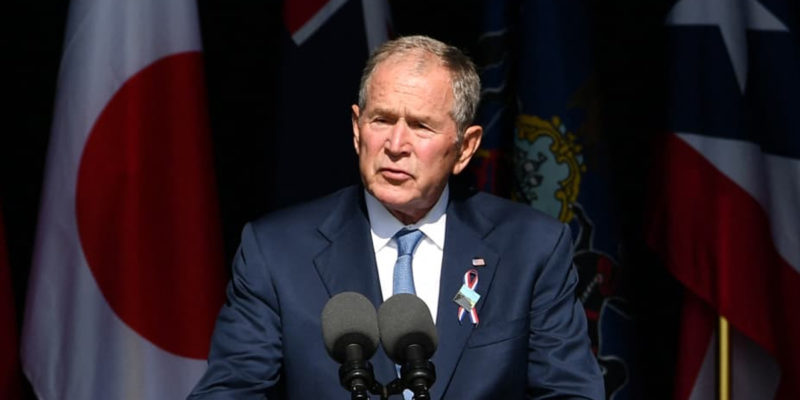 Readers of The Hayride know that while I might be a student of history, I don’t write a lot of retrospective stuff here at the site. I don’t do much of that at The American Spectator, either. My interest in history is much more focused on gathering information so as to project the future with a grounded perspective than to live in the past or rekindle memories. That isn’t a criticism of others who are more historical in their writings about current events; for example, here at The Hayride Mike Bayham and Conrad Appel write much more about history than I do and their stuff is excellent.

But this post will be an exception to my normal rule, because a number of things have come together and they ought to be commented upon.

If you haven’t watched the Netflix documentary series Turning Point: 9/11 and the War on Terror, you could do worse than to give it a look. It’s five one-hour segments, and while it’s naturally coming from a left-of-center perspective as you’d expect from Netflix it’s a lot more balanced than you might expect. Yes, the documentary interviews Barbara Lee, the only House member who voted against the post-9/11 Authorization for Use of Military Force, but it also interviews Andrew Card, who was George W. Bush’s chief of staff, and former White House Counsel Alberto Gonzales. David Petraeus and H.R. McMaster are interviewed as well as a whole host of lesser-known people.

And nobody makes out too well from this thing. The Bush Administration, as you might expect from a Netflix documentary, comes off like a bunch of clowns, but so does the Obama administration. In fact, Obama comes off worse than Bush in some ways. President Trump is given relatively short shrift, and Joe Biden is given more or less a pass.

It’s a valid critique to say this thing would have been better with a sixth episode dealing with the withdrawal from Afghanistan, but cobbling that together in advance of the series’ premiere for the 20th anniversary of 9/11 would have been logistically very difficult.

Particularly since Biden played such a prominent role in the Afghanistan mess from the beginning. Let’s not forget that the raid which took out Osama bin Laden in Abbottabad was decided upon over Biden’s objection as Vice President, and Obama Defense Secretary Robert Gates said of his experience dealing with Biden was that he’d been wrong on every foreign policy issue of the past eight years. A right-of-center 9/11 documentary would have made use of those facts in covering the withdrawal to note that while the mistakes made in the War on Terror were many and shared by both political parties, it’s unquestionable that the most aggressive bull in the china shop is the current president who has made an utter ruin of whatever effective policy might have come from 20 years of struggle.

The final part of the documentary shows a host of Afghan Army soldiers swearing they can handle the fight against the Taliban on their own. It’s very sad. It almost comes off as the filmmakers ridiculing these people as they vow to fight for their country.

You learn, or remember if you’ve forgotten, that Bush’s Defense Secretary Donald Rumsfeld had the right idea about Afghanistan all along. Rumsfeld’s perspective was that our mission in Afghanistan was to go in, kill terrorists, depose the Taliban with the lightest possible footprint, and then get the hell out of there and let the Afghans sort out who they want to be. Now – Rumsfeld wanted that because he was anxious to move on to Iraq, which was a war of a lot more dubious necessity.

But the money wasted, and the destructive mission creep, which came from the War on Terror and specifically beginning with Afghanistan, might not have happened if Rumsfeld had carried the day. We would have spent a whole lot less than $2 trillion and we would have had a lot fewer than 50,000 soldiers and Marines wounded, and a lot less than 2,400 dead Americans.

Would Afghanistan have been a better place?

The mistakes made in Afghanistan were legion, and they were criminal in many cases. The Bush administration allowed itself to get sucked into a mission creep there in the name of “counterinsurgency,” which is now proven to be a useless and failed strategy. Obama refused to commit the troops to Afghanistan to beat back a resurgent Taliban, but he did dial up the nation-building through the moon.

And at the end of the day, while there are no doubt lots of Afghans whose lives were improved by the blood and treasure we spent there, when America pulled out a nation of 33 million people allowed itself to be conquered in short order by a rag-tag band of 75,000 or so tribesmen with rickety AK-47’s and beat-up Toyota pickup trucks.

And while Biden deserves impeachment for the sheer sinister idiocy of the Afghan pullout, the most flagrant error of the experience was the notion acted upon that Afghanistan is a place worth 20 years of our time.

It isn’t. It never was. And the fact that we went into Afghanistan to fight the Taliban while continuing to fund Pakistan when the Pakistanis were giving the Taliban aid, comfort, shelter and funding – something all four of these presidents are guilty of – just triples the crime on the American people and our servicemen that the war in Afghanistan truly was.

Which brings us to Saturday, because Bush came out of his shell to give a speech at the 9/11 Flight 93 memorial in Shanksville, and what he said wasn’t acceptable.

Speaking at the 9/11 memorial service for Flight 93 in Pennsylvania, Bush recalled the September 11 attacks while warning of future terrorist threats to the United States.

“We have seen growing evidence that the dangers to our country can come not only across borders but from violence that gathers within,” he said.

Alluding to American citizens who stormed Capitol Hill to protest the 2020 election, the former president stated:

This right here is the genesis of our call to move from conservatism to revivalism. The American people, or at least those of us on the Right, have got to complete our divorce from Bush Republicanism and leave it in the dust where it belongs.

It is so utterly offensive to equate 9/11 with Jan. 6 that it boggles the mind to think an American president would be guilty of saying it.

And while that’s the kind of thing one would probably expect from a dirty politician like Barack Obama or Joe Biden, for whom slandering political opposition is a stock in trade, to hear it from Bush is truly beyond the pale.

What it proves is for all the invective hurled at Bush from the Left, and all the “No Blood For Oil” crap Chuck Schumer howled for all those years, at the end of the day the differences between Bush and the Obama/Biden Democrat machine are very minor. The uniparty which gave us two failed mission creeps in Afghanistan and Iraq, along with trillions of dollars in debt and a security state which has been weaponized against not just our foreign enemies but now the American people for at least a decade, is not just an Alex Jones myth.

Three thousand Americans were killed on 9/11. One protester was killed on One Six, and she was an Air Force veteran who was unarmed.

And George W. Bush just equated Ashli Babbitt with Mohammed Atta. He just said that people who believe Biden stole the 2020 election are on the same moral level with jihadist extremists who want to impose sharia on the entire planet.

Revivalism rejects this utterly. Revivalism judges that the proper response to 9/11 was to go to Afghanistan, depose the Taliban, demand the Pakistanis make no further incursions or meddling in Afghan affairs or have the financial spigot completely cut off, remove the wall between the CIA and FBI so that an obvious plot like 9/11 couldn’t go undetected for so long again and then stop there.

No outrageous ramping-up of the NSA’s electronic spying, particularly on our own people. No Guantanamo Bay detentions lasting for 20 years. No bleed into Iraq. And no War on Terror. Terror is not something you go to war with. Terrorists might well be, but terrorists can’t do much without sponsors, and we never bothered to touch the Saudis from whom most of the funding for operations like Al Qaeda came.

The best defense against Islamist supremacism is to be energy independent. To make the Middle East as geopolitically insignificant as possible. And to limit the number of potential jihadists living here.

Trump was the only one of our post-9/11 presidents to take steps in that direction. Which makes him the closest thing to a Revivalist we’ve got.

And then, of course, there is Joe Kent, an Afghanistan veteran who’s running for congress in Washington state. Kent’s response to Bush is exactly correct…

The only place Bush should be on 9/11 is answering to the American people for all his lies.

Instead he’s just showing us that the regime is not just one party, it’s the ruling class that despises us & is not done exploiting us. https://t.co/Tc9sVSzFyg

We should mark the 20th anniversary of 9/11 by forever closing the book on Bush Republicanism and never allowing our votes to be wasted on such awful failures of leadership again.