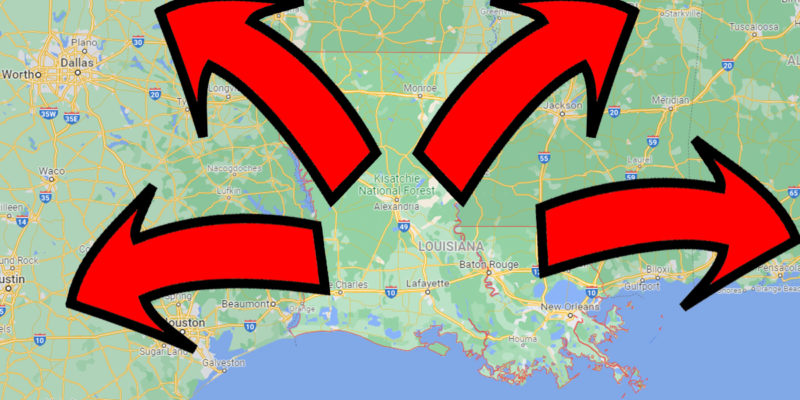 Earlier this week we noted that one measure of the toll outmigration is taking in Louisiana is found in the monthly figures put out by Secretary of State Kyle Ardoin which list the current voter registration totals. They’re published on the first of each month, and while they’re not exactly a census, they do offer an official measure of a general population.

More than 80 percent of adult Louisianans are registered to vote. The difference between the three million or so registered voters in the state and the 4.6 million or so Louisianans here can be found in (1) the state’s population of children below 18 years of age and (2) adults who aren’t registered either because they’re ineligible (i.e., they’re convicted/incarcerated felons whose voting rights have not been restored) or they choose not to register.

Well, today is the first of October, and there is a new report out on voter registration in Louisiana.

That’s a number almost identical to the population of Lake Charles, the sixth largest city in the state.

Why would you lose a registered voter? Well, they could die, and then they would come off the voter rolls. They could be convicted of a crime and they’d come off the rolls. But you would expect kids turning 18 and registering to vote would balance out the deaths, and you would expect people who’ve completed their criminal sentences and had their voting rights restored would balance out the ones having those rights stripped via a criminal conviction. Almost nobody voluntarily gives up their voting rights by de-registering.

Which leaves the main driver of this, that being outmigration.

When someone moves from one place to another they’re going to register to vote in their new home, and that triggers a de-registration in the place they moved away from.

So when you have 77,552 people coming off the voter rolls in Louisiana in nine months, it looks an awful lot like you’ve had more than 100,000 people picking up and leaving the state when you account for unregistered voters and minors.

That’s a catastrophic loss of people in only nine months, gang.

Who’s talking about this? The Hayride. Who else? We don’t know. We sure haven’t seen much of it from anywhere else. Former politician Garey Forster, who writes the occasional column at The Advocate as its house conservative, has touched on it a couple of times. Otherwise? Nope.

What we’ve seen is a bit of discussion about how Louisiana’s job market stinks, which is the ultimate “No s**t, Sherlock” statement. Louisiana’s job market has stunk for decades. And then there was the brazen attempt by a journalism student at LSU, writing under the banner of the “LSU Manship News Service” which is shopped around to legacy media outlets around the state, to blame the loss of Republican voter registration in the first quarter of this year on the Jan. 6 protest – despite the fact that there were even more Democrats coming off the rolls than Republicans during that time frame.

That was more of an attempt to hide the catastrophic outmigration. It failed miserably.

People are leaving Louisiana in droves. They’re leaving at a rate equal to or even perhaps greater than the late 1980’s, when the joke was that the last folks out of the state needed to remember to turn out the lights.

Our other real-time measurement of outmigration is U-Haul rates you can find at the rate calculator on U-Haul’s website. This morning we looked at those using a 10-foot truck and a rental date of Oct. 15. The numbers are pretty amazing and they tell a catastrophic story…

Yes, we keep using the word “catastrophic” because that’s what it is to lose the equivalent of Lake Charles’ population every nine months.

This hemorrhaging of Louisiana’s people out of the state, which we used to call a Texodus but we can’t anymore, because Louisianans are leaving for Florida, Tennessee, Alabama and lots of other places as well, has to stop.

Our politicians seem to think they can just ride things out until the next election and then bamboozle the folks with a fresh round of political rhetoric. But what they don’t understand is that people don’t believe it anymore.

And the same old business-as-usual leadership style is broken. It’s gone. It failed, and it’s dead.

What’s required is people with brains and balls, who are willing to drag this place out of the political and economic miasma it’s been in for decades. Sadly, those people are going to need to be accomplished liars as well, because if you tell Louisiana’s voters and most specifically Louisiana’s entrenched special interests what it’s going to take to put this place on a competitive footing with the Texases, Tennessees and Floridas you’re going to lose elections to the status-quo gang.

Which is why lots of the people who Louisiana needs to be those leaders are throwing up their hands, paying over-the-top U-Haul rates and hitting the roads with their families and their stuff to find greener pastures.

And nobody even seems interested in talking about the catastrophic outmigration which is draining us dry.

Interested in more news from Louisiana? We've got you covered! See More Louisiana News
Previous Article SADOW: COVID Zero Is A Fantasy, But JBE Is Clinging To It
Next Article CROUERE: Fauci Is The Grinch Who Stole Freedom