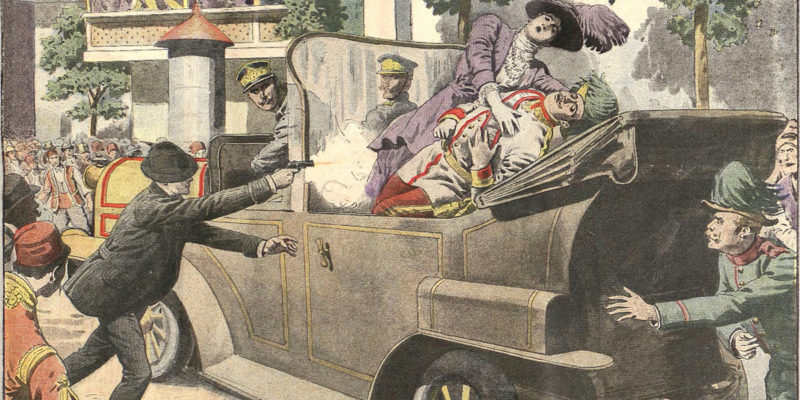 In all of history, there are two assassinations that had the greatest impact on the world.

The first was Julius Caesar on March 15th, 44 BC. This marked a turning point in Ancient Roman history as the Senators, thinking they would be hailed as heroes, instead found themselves hiding from the people. The Romans fell into civil war with Octavian coming out on top. During this time, key players start taking roles in the former Republic and for a few hundred years, the Roman Empire ruled the earth. It is this event that paved the way for Jesus, Christianity, and the persecution of Christians.

The second is one that you may not expect, and it’s a name that you may vaguely remember, if you remember. Or you might be more familiar with the band of the same name. Regardless, the political leader whose assassination had the greatest impact on the 20th century is often forgotten. On the morning of  June 28th, 1914, a well organized assassination attempted on Archduke Franz Ferdinand failed when the grenade thrown at his car bounced off and rolled underneath the car behind him carrying his entourage. It should be the end of the story that a preplanned attack failed. However, life has a way of delivering the unexpected.

Franz Ferdinand decided to follow up with his entourage and had his driver take him to the hospital to visit them. The driver, unfamiliar with the area, took a turn that sealed Ferdinand’s fate, and the fate of the world with it. 19-year-old Gavrilo Princip just happened to luck into Ferdinand’s path where the driver confused with directions had stopped. Princip jumped into action, shot two rounds into the car, wasn’t even looking and ran off. Those two un-aimed shots hit the target– One in Ferdinand’s jugular, the other into Mrs. Ferdinand’s stomach. I find it so amazing that the fate of the world wasn’t decided because of a well planned assassination attempted that failed, but by the successful secondary attempt that was happenstance.

Or at least, those things would have happened a whole lot differently.

The world would look a lot different but for the assassination of Archduke Franz Ferdinand. And it only happened because Ferdinand happened to stop where nobody could have known, and the Princip happened to be there to fire two un-aimed shots.

In 1914, there was no super power to keep the peace. The United States was 50 years removed from its own civil war and was coming into its own industrious future. The Soviet Empire had not yet been born. Great Britain was the master of the seas but not of Europe. The world was without clear leadership and became a powderkeg ready to be ignited.

In the United States, we don’t pay much attention to what’s going on in the rest of the world. We should, but we live in our arrogance thinking that our government is responsible for every ill the world has ever seen. Well, just the idiots think that. For most Americans, the reality is our states are like countries. If you think about what most people in the rest of the world deal with, they have local news, then national news, and world news. In the United States it’s a bit different, our local news, then state news, then national news, then world news.

So for us, World News is an additional thing to pay attention to, and we get more than our fill of national news.

But we need to start paying a lot closer attention to what’s happening in the rest of the world.

Our supply chain is running thin and Pete Buttigieg’s answer is to abuse the race card by talking about bridges being racist or something. The Alfred E Neuman look-a-like has been a privileged white guy his whole life, but thank God he comes along to abuse the race card. Americans are being deprived of their resources while Russia, OPEC, and other oil producing nations decide what gets pumped. We have General Milley who, by example, sent a strong message to military personnel that it’s okay to disrupt the chain of command. We have Mayorkas letting people flood into the country, and we have Garland who treats his position by utilizing federal law enforcement as his personal Gestapo. It’s painstakingly obvious that they never wish to let go of power and that they will continue to abuse their power.

However, life plays funny tricks. While our current administration is playing for their power, they have created a severe absence of leadership on the world stage and other countries are moving to fill that void.

Afghanistan has gone dark, Cuba has gone dark. Nicaragua is now on the verge of going dark. What happens when those people start leaving Nicaragua? Where do you think they are going to go? And if wars break out in Central American countries, we’ll have a far greater refugee problem on our hands. While the Biden Administration tries to play the roles of dictators, other nations see an administration loaded with Keystone cops. This coming at a time that we are running ourselves thin on resources and weakened by lack of leadership.

Without clear US leadership, the world is becoming a powderkeg ready to be ignited. If this administration doesn’t get their act together soon, we may soon see another monumental shift in the world