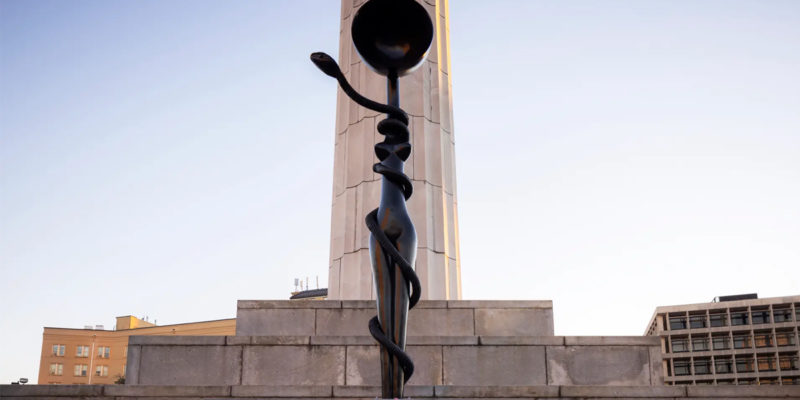 Of course, I don’t live in New Orleans, and the city of New Orleans is one of the last places in America I would choose to live in. New Orleans has become a sea of crime, potholes, corruption, incompetence and medical tyranny, which is run by a woman so devoid of intellectual and moral merit as to call into question not just the intelligence but the sanity of the electorate there, and thus anyone who would choose to live in that city for any reason short of owning property he or she can’t sell for what he or she paid for it isn’t worthy of much of my sympathy.

Otherwise I would have plenty, for New Orleanians are my countrymen and I hate to see Americans suffer at the hand of government.

But among the people of that city it doesn’t seem there is much outrage over this, which is a real shame.

Five years after the removal of a Robert E. Lee statue at the former Lee Circle in New Orleans, a new 12-foot-tall bronze sculpture has been erected.

The project, titled “Sentinel (Mami Wata)” and completed by artist Simone Leigh, was unveiled on Saturday morning, completing the grand finale of the Prospect.5 international art exhibition that started in October of last year.

The sculpture went up earlier in the week without any praise or attention and was wrapped in a black plastic sheet.

Now, the sculpture, which depicts an attenuated female figure with a drum-shaped head entwined by a serpent, stands where the former statue honoring the Confederate leader once stood.

The purpose of the piece is to serve as “an homage to history and continued presence of traditions of the African diaspora in New Orleans,” according to the Prospect.5 website.

The piece sits across from the column that once held the statue of the Confederate general. While the exhibition planners considered placing it where Lee’s statue stood, Leigh advocated against it, Prospect executive director Nick Stillman told Nola.com.

Leigh reportedly wanted her sculpture to be closer to the ground as to be “at the level of the people.”

Leigh was born in Chicago and is based in New York. She works on sculptures that resemble the Black female form, according to Nola. com.

It’s something of a satanic figure, this statue, as it evokes the serpent who tempted Eve to eat the apple in the Garden of Eden. Mami Wata is a pagan goddess worshipped here and there in West Africa and less commonly in the Caribbean, though artistic portrayals of Mami Wata typically look nothing at all like this piece.

Most scholarly sources suggest the name “Mami Wata” is a pidgin English derivation of “Mother Water,” reflecting the goddess’s title (“mother of water” or “grandmother of water”) in the Agni language of Cote d’Ivoire, although this etymology has been disputed by Africanist writers in favor of various non-English etymologies, for example, the suggestion of a linguistic derivation from ancient Egyptian and Mesopotamian, such as the Egyptian terms “Mami” or “Mama,” meaning “truth” “Uati” or “Uat-Ur” for “ocean water”. Historical evidence for such a deep antiquity of the goddess’s tradition demands a further research to a connection with the Mesopotamian Ea or the Syrian Atargaris. Commonly thought to be a single entity, the term Mami Wata has been applied to a number of African water deity traditions across various cultures.

As the Mami Wata traditions continued to re-emerge, native water deities were syncretized into it. Traditions on both sides of the Atlantic tell of the spirit abducting her followers or random people whilst they are swimming or boating. She brings them to her paradisaical realm, which may be underwater, in the spirit world, or both. Should she allow them to leave, the travellers usually return in dry clothing and with a new spiritual understanding reflected in their gaze. These returnees often grow wealthier, more attractive, and more easygoing after the encounter.The spiritual importance of Mami Wata is deeply rooted in the ancient tradition and mythology of the coastal southeastern Nigerians (Efik, Ibibio and Annang people). Mami Wata often carries expensive baubles such as combs, mirrors, and watches. A large snake (symbol of divination and divinity) frequently accompanies her, wrapping itself around her and laying its head between her breasts. Other times, she may try to pass as completely human, wandering busy markets or patronising bars. She may also manifest in a number of other forms, including as a man. Traders in the 20th century carried similar beliefs with them from Senegal to as far as Zambia.

But what seems most striking about it is that the iconic statue of Robert E. Lee which stood atop that pedestal was taken down because of “racism,” and this rather unmemorable item makes clear that justification wasn’t operative at all.

It’s a good execution of Thomas Sowell’s indictment of the Cantrells of the world, that they don’t want to end racism, only to put it under new management.

Exactly how is Mami Wata an appeal to white people? Or Asians, Native Americans, or Latinos? Isn’t it something of a black supremacist figure?

It’s an “homage to history and continued presence of traditions of the African diaspora in New Orleans.” In other words, it’s for black people in New Orleans, but not anybody else.

“The Robert E. Lee monument was a menacing white supremacist presence that loomed over the city; this placement is a rejection of that symbolism,” the co-curators said in a joint statement. “The decision to temporarily place Simone’s work at the base of the pedestal points to the desire for new monuments to emerge from artist practices, the public’s imagination, the work of activists and the breadth of cultural practices that define this city.”

And it isn’t a New Orleans-themed statue. Nothing about this thing glorifies New Orleans. The artist isn’t from New Orleans and doesn’t appear to know much of anything about New Orleans. She certainly didn’t bother to craft something which had any significance to New Orleans. You could put this thing in Charlotte or Phoenix or East St. Louis and it would be just as appropriate.

More than that, it isn’t beautiful. It’s a half-assed representation of a West African cult figure which typically presents as a vibrant, sexual, life-giving (and life-taking) female form. Mami Wata, among her devotees, is associated with intense rhythmic drumbeats and wild dancing which puts her followers in a trancelike state from which she can speak to them.

Do you get that from this statue? No, you don’t. This thing features the snake, which in most representations of Mami Wata is more of a decoration. You don’t even notice Mami Wata as a protagonist at all until you see that the statue has legs and hips and tiny little breasts. That big ball which represents her head could be anything. People who first saw the sculpture initially thought it was a snake wrapped around a spoon.

This thing sucks on lots of levels. It’s a perfect avatar for today’s cultural Left.

You could argue Robert E. Lee had nothing to do with New Orleans and that his statue was nothing more than a glorification of the Confederacy. You’d be wrong, because the reason Lee was such a prominent cultural figure in the 1870’s and 1880’s not just in the South but everywhere in America was that after the war he worked to bring the two sides back together. But at least it’s a fair statement that Lee wasn’t particularly connected to New Orleans.

But that Lee statue was unquestionably an artistic triumph by famed 19th century sculptor Alexander Doyle. It was (still is) a beautiful piece of public art. Lee even has a discernible pained expression on his face, something most people didn’t even know until after the statue was taken down. There is detail to the statue; nuance. It represents a real human being whose exploits affected American history in ways which were relevant to New Orleans.

To replace Lee, the Powers That Be in New Orleans brought in something which is even less relevant to the city than Lee was, a West African god almost nobody in New Orleans ever heard of, portrayed in a fashion far less aesthetically pleasing than the Lee statue, and placed at the foot of an empty column.

Everything about this is shoddy, substandard, lazy. There is no excellence in it. It’s half-assed. Which describes LaToya Cantrell perfectly, as it does the modern Left. They ruin everything, and then they triumphantly rule over the ruin.

Nobody with a brain should live in New Orleans. Not anymore, and not with this leadership. Get out while you can, with whatever you can take with you.