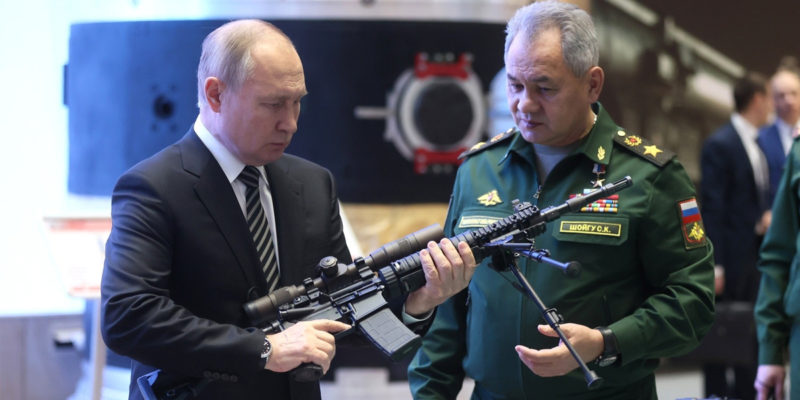 Vladimir Putin seems to be a man obsessed with old history and imagined national grievances, much like a certain German dictator.

As an aspiring fuhrer, Adolf Hitler made great hay over indignities stemming from the Versailles Treaty that recalibrated post-Great War Europe and burdened Germany with heavy penalties in territory and treasure.

Hitler also publicly agonized over the plight of ethnic Germans left behind the frontiers of new nations born out of the collapse of the German and Austria-Hungarian empires.

And before the naval guns of the German cruiser Schleswig-Holstein fired upon the Polish fortifications at the Westterplatte and panzer units raced east across the border, Hitler scored coercive diplomatic coups that led to the return of former German land to the Reich.

After the Anschluss with Austria, which was explicitly forbidden by the Versailles Treaty, Hitler made a play for the Sudetenland Germans, who resided along the western perimeter of the former Czechoslovakia and its successor state the Czech Republic.

Here was the West’s best chance of stopping Hitler as the Czechoslovakian armed forces anticipated a future German invasion and had heavily fortified the mountainous border. However Britain and France lost their nerve and capitulated in Munich in September 1938, sacrificing a nation whose leadership wasn’t even allowed to be present and was not a signatory on the annexation.

Hitler made another land grab prior to the generally recognized start of World War II, forcing Lithuania to surrender Klaipeda/Memel, which had a large ethnic Germans population, in March 1939.

Putin does not recognize Ukraine’s right to exist as a sovereign country, a position Red China holds towards the de facto state of Taiwan (Republic of China).

Now for the inconvenient history for Putin.

The Russian autocrat’s obsession over a secure western border with NATO countries is preposterous and several parts insincere and paranoid self-delusion.

As a student of European history I am unaware of any wars of aggression launched by Latvia or Estonia against Mother Russia.

And while Angela Merkel is no Margaret Thatcher, I don’t recall her addressing a torchlight parade at the Zeppelinfeld in Nuremberg about the Christian Democratic Party’s non-existent lebensraum platform plank.

No, the last time tanks participated in an eastern Europe invasion were Soviet T-34s rolling on to the streets of Budapest in 1956 and Warsaw Pact T-54s sweeping into Czechoslovakia in 1968.

It’s unlikely Bulgaria will be attempting an amphibious landing on the eastern shore of the Black Sea or Albanian paratroopers will be falling from the skies over Smolensk any time soo….ever.

And then there’s the really obnoxious part that Putin neglected to mention.

The Holodomor’s death toll is estimated in excess of three million for this coordinated man-made terror starvation campaign intended to both further integrate the country into the Communist system and to suppress Ukrainian nationalism.

There are other countries who can present their own very real grievances about Soviet domination, starting with the Katyn massacre of Polish military and government leadership, the stuff that doesn’t get taught in history class that every American student should learn about socialism.

Moscow forever lost all rights to claim Ukraine as a part of Russia regardless of the national flag flapping above the Kremlin’s imposing walls.

The Ukrainians who resorted to cannibalism and the emaciated frames of women who fell dead in the streets from the mass starvation purchased their land’s independence through their suffering, which was tardily redeemed with the dissolution of the USSR.

The West should immediately begin tightening the sanction screws on Russia. The ruble is currently trading at 79 to the dollar and while Russia has not known western level prosperity, creating additional economic discomfort won’t help Putin’s reelection hopes in 2024.

Reassurances of support must be made to NATO members through the deployment of defensive weapon systems and the presence of American military personnel.

A clear message must be sent to Putin without equivocation: Moscow is never getting the free peoples of the Baltics nor Eastern Europe back under their control.

NATO must demonstrate the backbone that Chamberlain and Daladier lacked at Munich.

Russia is a far weaker military power than it projects and will not risk inviting a war against a unified front. And Putin won’t risk his position on such a game knowing that there are no shortage of opportunists with military rank lurking about the Kremlin.

The Biden Administration should immediately reverse its anti-oil policies to drive down the price and deprive Moscow of its petro-cash.

To simply chalk up Russian military occupation across an internationally recognized border as a mere fait accompli will only lead to additional incursions in the future. And further provocations by unrelated parties watching this play out with great interest.

Don’t think the Biden-orchestrated panicked flight from Afghanistan wasn’t noted in Moscow and factored into Putin’s calculations regarding his move on Ukraine. And the Biden White House’s evacuation of the US embassy from Kiev to Lviv hasn’t reassured his confidence.

The old ways of moving boundaries by force of arms in the Western world must be discredited via severe economic and diplomatic consequences.

The Russian invasion of eastern Ukraine might not be “our war” to fight but allowing Putin to bulldoze smaller neighboring countries with impunity brings matters increasingly closer to a point where we will find ourselves in one not of our choosing.