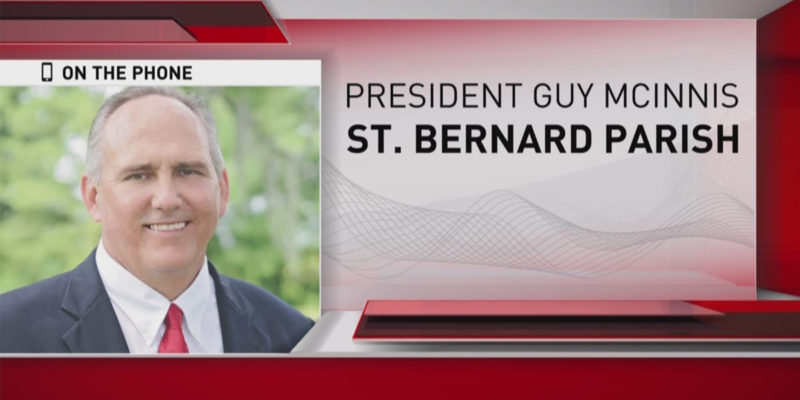 We probably can’t attach too much significance to this item or the timing of it, particularly since he isn’t a Democrat who’s now putting an “R” next to his name. But Guy McInnis, who’s coming to the end of his second term as the parish president in the New Orleans suburb of St. Bernard Parish, is now a member of the GOP.

A press release from the state Republican Party yesterday afternoon…

The Republican Party of Louisiana is proud to announce St. Bernard Parish President Guy McInnis has officially become a Republican.

McInnis has served as St. Bernard Parish President since 2015 as an Independent. After a recent trip to Washington D.C., McInnis returned to Louisiana side by side with Congressman Steve Scalise to announce his switch.

“I’ve been a conservative my entire life and have voted Republican in every presidential election over the past few decades. However, seeing what’s happening to our country has led me to make this move,” said McInnis.

LAGOP Chairman Louis Gurvich said, “We are excited to welcome President McInnis to the Republican Party and work together to advance conservative policies for the great people of St. Bernard parish.”

Mike Bayham, whom our readers know well, is the chairman of the St. Bernard GOP. He had this to say…

“We welcome Guy and all other disaffected Louisiana voters to the Republican Party. Considering the state of our society, people need to stand up and be counted against the leftist culture being pushed by Democratic politicians and their allies in the media and academia.”

Bayham’s quote brings up some thoughts we’ve had in the last couple of days, or perhaps longer.

It’s not the same thing for a voter to register or identify as an independent as compared to a politician. You put an “I” next to your name when you run for office generally if you think it’s advantageous. For example, Roy Daryl Adams is the state representative for the district in the Feliciana parishes. Adams is basically a Democrat, though he isn’t a communist, and that’s a Republican area. Had he put a “D” next to his name he would have had zero chance of winning an election he probably wouldn’t have won anyway; his GOP opponent actually spent the weekends during the runoff election hunting rather than campaigning. In any event, if he thought he could win with a “D” on his ballot line Adams would be a Democrat.

But as a voter, our theory based on a good deal of experience is that most ordinary people calling themselves independents aren’t centrists or political schemers. Most independents are mostly center-right or straight-up conservative, and they aren’t Republicans because they’re disgusted with the GOP. Independents are the ones you hear griping about the “uniparty” that runs Washington and the state capitol, and they bitch about how there’s no difference between Republicans and Democrats.

And their vote tends to be pretty volatile. They turn out when they feel like it.

It’s said that Joe Biden got 54 percent of the independent vote in the 2020 presidential election. That would be an indication that those disaffected conservatives who make up a large portion, if not a majority, of independents didn’t show up like they did in 2016.

But when independents give Biden a 24 percent approval rating, according to a Feb. 4 Interactive Polls survey, or a 23 percent rating, according to the latest CIVIQS poll, it’s an indication the disaffected conservatives are beginning to congregate in the GOP camp again.

Is McInnis’ flip to “R” an indication of that? It’s likely more to do with wooing by the local GOP than a reflection of a national trend. But these things very rarely happen in the face of a headwind, unless it involves sanctimonious imbeciles like Liz Cheney or Adam Kinzinger.

In any event, it’s a Republican gain, and if we’re not mistaken McInnis’ flip means that every one of the suburban parishes in the New Orleans area (Jefferson, St. Bernard, Plaquemines, St. Charles and St. Tammany) are all run by Republicans now.

Interested in more national news? We've got you covered! See More National News
Previous Article We’re Fascinated To See What The Ronald Greene Legislative Committee Does
Next Article SADOW: JBE’s Probably Vetoing The Congressional Map, But Not The Others