Yesterday we talked about the JMC Analytics poll which came out over the weekend and showed John Kennedy virtually certain to win re-election to the U.S. Senate in the November primary, but we saved some analysis of that poll for today.

Because pollster John Couvillon didn’t just ask questions about the Senate race. He tested the 2023 governor’s race as well, and here were the numbers he came back with…

The most interesting place to start here is the inclusion of Kennedy in the gubernatorial field.

Kennedy isn’t going to run for governor in 2023. Let’s be pretty clear about that. He has the best job he could ever imagine right now as a U.S. Senator. He goes on Fox News practically every day and makes himself more or less the Republican conscience of the Senate, he terrorizes Biden’s judicial nominees, he drops those cornpone nuggets of wisdom and humor – if he didn’t give that up to run for governor in 2019 when people expected he would, he’s not going to do it now.

The only factor which would mitigate toward Kennedy running in 2023 rather than 2019 is that it’ll be an open race in 2023 and there was an incumbent in 2019. But everybody knows Kennedy would have clobbered John Bel Edwards had he run.

So why include Kennedy in the poll?

Usually when these polls are paid for by anonymous folks who commission them and not a media entity, it’s generally boosters of various candidates. Couvillon has a practice of being quite tight-lipped about who his clients are for polls like this, so really we can just speculate that the poll might have originated in one of two ways to produce Kennedy on its test ballot.

One would be this was a poll commissioned by Kennedy’s friends, and tossing his name in the gubernatorial ballot is a way to show that he’s the unquestioned big dog in Louisiana politics. Which of course he is. He’s the junior senator from Louisiana, but he’s clearly the more popular of the two between himself and Bill Cassidy.

The other would be that this was a Cassidy feeler poll.

If it’s the latter, it can’t have made his camp very happy. Not only does Cassidy poll at only 10 percent, placing him third among the Republicans, but the poll also shows some really rotten approval numbers for him. 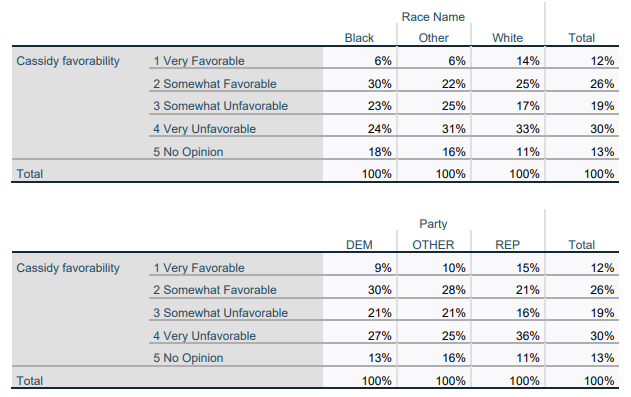 This is before Donald Trump comes down to Louisiana repeatedly to trash Cassidy as a RINO and a nutcase, which would absolutely happen were he to get into the governor’s race.

So if it’s a Cassidy poll, it isn’t a very satisfactory one for the home team.

But one thing we took from these numbers and Kennedy being on the test ballot is that Kennedy’s presence held Jeff Landry’s vote down. It also held down John Schroder’s vote, and Schroder at just 1 percent in this poll is a bit of an eye-opener.

There are people who will tell you Schroder is a non-factor in this race. We aren’t convinced of that. Schroder’s semi-announcement back last year that he was looking at the race led to a decent surge of fundraising, and while that isn’t completely translatable to votes it does indicate people out there would have interest in him.

He ought to be at more than 1 percent in this poll. He might have shown considerably better if Kennedy wasn’t included.

But it’s clear Schroder has some work to do. He needs to start talking about what Louisiana would look like in four years if we made him governor – speaking in generalities about reforms he’d make, leadership styles he’d offer, policy directions he’d support. He hasn’t done much of that so far, and a reading of this poll would indicate that could be the reason he hasn’t taken off.

Landry’s camp, on the other hand, probably has to be pretty comfortable with these results. He’s only at 11 percent but Kennedy’s inclusion into the poll means it’s likely Landry’s vote more than anybody else’s which was diluted. Take Kennedy out and Landry’s probably at 20 percent, maybe even 25.

We’re getting that from the crosstabs… 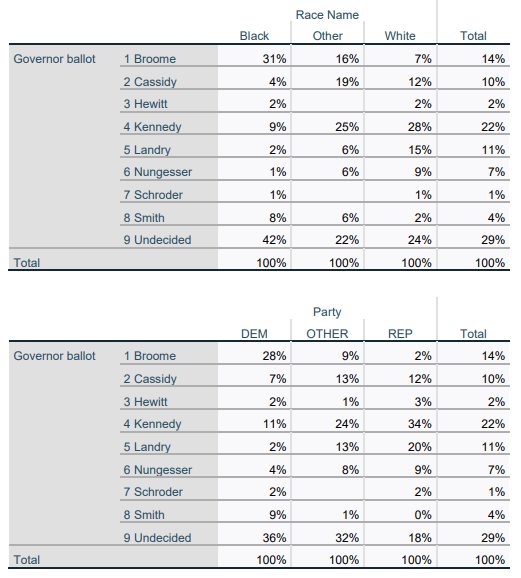 Republican voters break 54 percent for either Kennedy or Landry, and white voters break 43 percent for one of the two. They are ideologically aligned, in comparison to, say, Cassidy and Nungesser; those numbers show the strength of the conservative base vote in the state.

If Kennedy isn’t in, Landry is getting half the Senator’s vote, by a conservative estimate. Schroder might get most of the rest.

There is no reason to believe Cassidy or Nungesser will get much of it.

The other item which shows up pretty clearly in these numbers is the utter weakness of the white Democrat vote. That Gary Smith, the white Democrat put on this test ballot, is at just nine percent with his own party and has negligible support from anyone not a registered Democrat is very telling. Independents and soft Republicans gave John Bel Edwards his margin of victory in both 2015 and 2019, but these numbers show they’re not interested in any kind of repeat of that. The generic gubernatorial ballot showed that…

So the bulk of the undecided vote seems to be black voters, and those will break for Broome, assuming she’s the black Democrat in the race. She would make the runoff.

Our take on this poll is that it confirms what we’ve thought about the 2023 gubernatorial race from the start: Landry, of the likely entrants on the GOP side, has the strongest base and is the most likely to make a runoff. If a black Democrat like Sharon Weston Broome is in there with him, Jeff Landry is your next governor.

What this poll suggests that we hadn’t formed an opinion on is that in the 2023 cycle a white Democrat can’t make the runoff with Landry and then win, the way Edwards managed to do against David Vitter in 2015. There aren’t the votes available if Gary Smith is only getting 8 percent of the black vote in the primary. Of course, you have a lot of uncertainty when 42 percent of black voters are undecided – but three-quarters of that vote surely goes to Broome if this field, sans Kennedy, is representative of reality.

And of course, this poll is devastating for Billy Nungesser. When he’s losing the moderate vote to Cassidy by a 12-9 count despite Cassidy’s terrible approval numbers, it indicates Nungesser’s base is limited.

Yes, take Cassidy out of the race and Nungesser gets most of his vote. Assuming that vote even shows up. But a poll like this likely incentivizes someone else, like Public Service Commissioner Craig Green or term-limited state senator Rick Ward, to jump in and challenge Nungesser for the moderate/RINO vote.

The poll had Nungesser at just 9 percent in the New Orleans area, which is worst of all. They know him best there and he’s still behind Cassidy and barely ahead of Landry (7 percent).