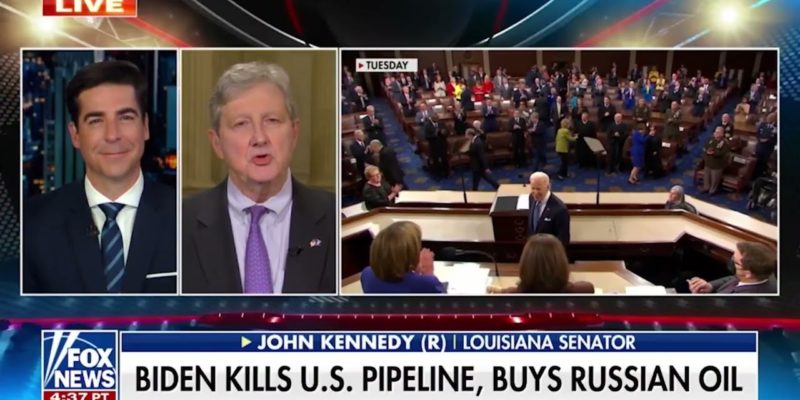 In speech after speech, Republican elected officials have used the same phrase year after year:

A concept that may have seemed abstract to audiences in the past has suddenly become all too real to Americans today. The Biden Administration, in an effort to please the progressive left of the democrat party, immediately shut down domestic drilling. And dictators like Vladimir Putin couldn’t believe their good fortune.

Louisiana Senator John Kennedy saw this situation coming from a mile away. For months prior to the Russian invasion of Ukraine, Sen. Kennedy had been on TV and radio telling everyone who would listen that the Biden administration’s energy policy was making the world less safe.

A strong new ad, released by the Conservative Louisiana PAC, stitches together some of Kennedy’s “Patrick Henry moments” into a :30 clip.

In January, Kennedy told Trey Gowdy on Sunday Night in America that Biden’s woke clamp down on oil and gas was going to “gut Louisiana like a fish”. Conservative Louisiana put an image of a gutted fish in the ad to illustrate the point.

In early March, Kennedy told Jesse Watters Primetime that “unless you identify as an idiot, you can see the national security implications of [Biden’s energy policy]”.

Americans were shocked to learn this month that we were buying billions of dollars of Russian Oil each month, essentially funding the invasion of Ukraine. Americans of all walks of life are, for the first time, crying out to increase domestic energy production.

Hate to say it, but we need to increase oil & gas output immediately.

Sen. Kennedy is up for re-election this Fall. His challengers from the left will all echo the Biden policy on oil and gas production. Can you imagine trading John Kennedy for the radical Gary Chambers?

Putin and Xi Jingpeng would want nothing more.