We’ll see if it actually gets a vote, but something very interesting happened yesterday on the House floor at the Louisiana legislature. Namely, Rep. Dodie Horton’s bill which is similar if not identical to the Florida anti-grooming law was resuscitated.

If you’re familiar with how legislatures work you know that a bill which is voted down in committee is usually dead in the water. As a practical matter, the only real way to revive such a bill is to discharge it to the Committee of the Whole, which can be done via a motion which gains majority support in the body.

And that’s what happened to HB 837 yesterday, as the conservatives in the House rallied behind a discharge motion. 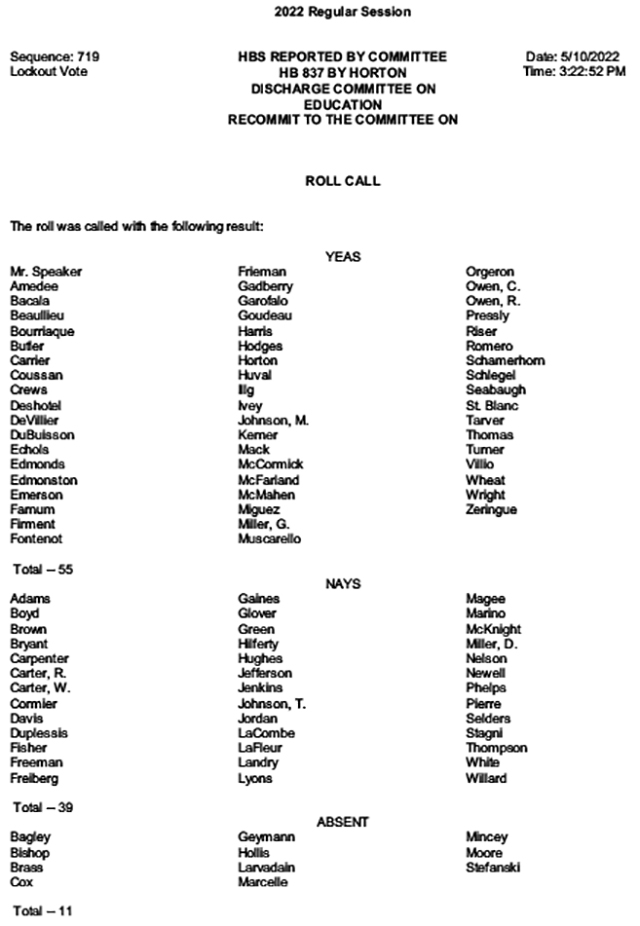 It was by the barest minimum of majorities – 55 votes when 53 were needed – but it happened. There are three or four votes among the absent who might be counted on as “yes” votes on final passage.

And some of the “nay” votes could be brought along if Horton waters down the bill a little. While the Florida anti-grooming law prevents schools from talking about sexual orientation and transgenderism, etc., with kids from kindergarten through third grade, Horton’s goes to eighth grade. That’s certainly defensible, but what we know is that a bill through third grade can be made law in a state not dissimilar to Louisiana in its ideological makeup. Remember, the majority of Democrat voters in Florida approved of the anti-grooming bill there even after the media mislabeled it as the “don’t say gay” bill.

It’s questionable when the bill will be brought up for a vote on the House floor. That’s up to House Speaker Clay Schexnayder, and the story went that Schexnayder wanted the bill killed in the House Education Committee last week so it wouldn’t come up for a vote. We think that story might be true, especially seeing that Rep. Vinny St. Blanc of Franklin voted to kill it in House Education and lo and behold he voted to discharge it to the Committee of the Whole yesterday. Either St. Blanc felt the heat from his constituents and got scared, or he was doing Schexnayder’s bidding and when the discharge motion came he wasn’t going to fall on that sword a second time.

If Schexnayder pushes the bill to a vote, it should pass. But it won’t be a veto-proof majority. And in the Senate, which is even more wishy-washy than the House, it’s hard to know how far it can move.

Either way, John Bel Edwards is going to veto the bill. His administration has been more replete with gay and trans inner-circle employees than any other in the South and certainly any other in Louisiana’s history; Edwards isn’t about to stand against trans advocacy in Louisiana’s public schools.

Politically, of course, that’s exactly why it’s important to push this bill to his desk. The voters of this state need to know who they elected twice, so they’ll know not to make such stupid mistakes again. Letting Edwards skate on making a call on HB 837 after Florida made it the law of the land is an unacceptably poor performance, and Louisiana’s legislature can’t allow itself to be guilty of that if the members want to have political futures.

We’re not optimistic the job will get done. But at least there’s some life in Horton’s bill. And for that we’re grateful.