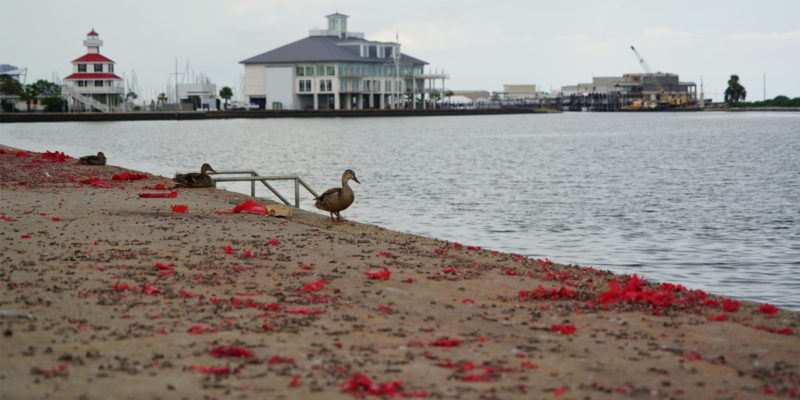 Sunday’s July 4th illegal 3-mile display of fireworks on Lakeshore Drive probably surpassed any of the spectacular July 4th fireworks during the fifty-five years of Pontchartrain Beach Amusement Park. The debris from Sunday’s hour-long display remained Monday on the benches and pathways as a storm arrived and spread exploded firecrackers into the steps of lake, where baby ducklings feed.

Shooting fireworks is illegal in Orleans Parish, and residents want to know why did police stand down while such a large scale illegal event happened. Was NOPD short-staffed due to officers at Essence Festival and the Riverfront fireworks? The lack of enforcement comes three months after the Easter Sunday 12-tons of trash event, which received media coverage and its Facebook post being shared over 10,000 times with a reach of 1.8 million.

That event was first reported in The Hayride. MARSALA: New Orleans Lakefront Littered With More Than 10 Tons Of Easter Trash (thehayride.com)

The page was originally created to prevent Jefferson Parish politicians from placing a full-service bar and motel at the west side of West End Park. Jefferson Parish has 250’ of shoreline approximately 100’ deep at West End.

Historically, this abnormality has caused law enforcement problems and appears to have been purposely designed to allow illegal activities of casinos, speakeasys, and prostitution during and after the Prohibition Era.  NOPD has no authority inside Jefferson Parish buildings and cannot respond to calls from New Orleans residents.

In late June, the State of Louisiana stopped a 15-story West End condo development project outside the Hurricane Protection Wall that was moving through the City of New Orleans permit process.  At the state hearing over 60 residents attended to explain the negative details of the project that New Orleans officials were overlooking.

Residents of West End fear Jefferson Parish officials are repeating the mistake made in 2014 when no one questioned the negative impact of new north airport terminal on 5,000 residents in Veterans Heights. Elected officials failed to ask Mitch Landrieu if an access road would be needed. Landrieu either purposely omitted informing about the need for a $300 million access road or did not fully comprehend what he was doing.

In 2018, Bucktown residents expressed their opposition to the Jefferson Parish proposed commercial development in 30-acre Bucktown Harbor. At a March Municipal Yacht Harbor Meeting, presenters posted on-line a handout that accused the West End Marina residents of being “NIMNs” for Not in My Neighborhood. However, the report noted that with post Katrina building codes and the large number of existing restaurants, opening a full-service bar in West End Park is problematic. Questions go unanswered.

None of the West End development reports contain an Environmental Impact Report. In 2019, a pelican colony moved into the former Fitzgerald’s site. Photographers gather frequently to photograph the birds returning at sunset.

Interested in more news from Louisiana? We've got you covered! See More Louisiana News
Previous Article SADOW: The Legislators, And Not Their Leadership, Might Cause A Veto Session
Next Article SEABAUGH: Yes, A Veto Override Session Is Necessary, And Here’s Why