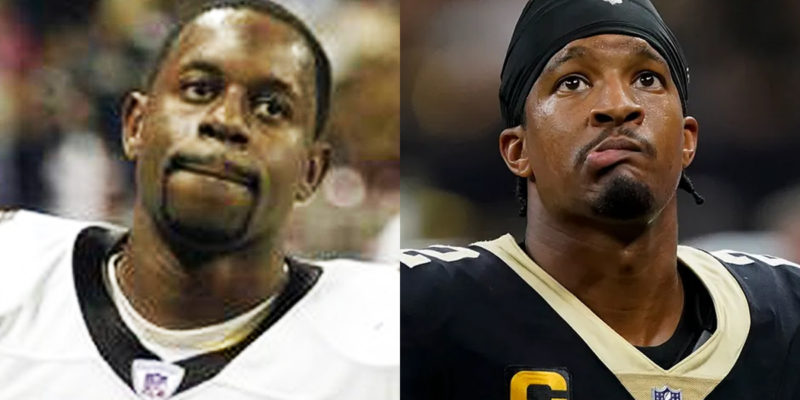 In 2002, the New Orleans Saints had an amazing defense and I’d argue it was the best squad they’d fielded since the apogee of the Dome Patrol.  The offense was clicking as well and after an off-2001 following their first ever playoff win, things looked bright going into the Jim Haslett era.

In the 2002 season the Saints swept their NFC South rival Tampa Bay Buccaneers, a team that would only lose two other games and win the franchise’s first Super Bowl.

Yet the team that beat the Bucs twice would not even make the playoffs, losing to an awful Cincinnati “Bungles” team along the way towards a disappointing finish, an omen that would prove the rule under Haslett.

There are a few things that could be pointed at, but #2 proved to be the #1 issue.

Saints quarterback Aaron Brooks was seriously injured an appropriately numbered 13th game in the season against the Baltimore Ravens, ironically the last time the Saints would defeat the black birds until Jason Tucker missed that extra point a few years ago that allowed Drew Brees the distinction of claiming to have beaten every NFL team.

Despite Brooks’ obvious injury, Haslett stubbornly kept him on the field.

And Brooks wasn’t about to take himself out because that’s  how he got the starting job just two seasons before when Jeff Blake was lost for the season due to injury.

Brooks went from backup to starting QB with the pay of his new status. Jake Delhomme was on the Saints’ bench as the backup and Brooks wasn’t about to help make his career (turned out he didn’t need to when leaving the Saints and heading to Carolina and leading the Panthers to a Super Bowl appearance).

Had Delhomme played instead of Brooks, the Saints would have made the playoffs as a wild card.

All they needed to do was win one of their final three games, yet the team blew it as opposing teams knew that the Saints’ offense was not running on all cylinders.

Even the Bungles who essentially asphyxiated the Saints’ running the same play over and over again.

The Saints and Brooks would barely miss out on the playoffs then and the next two seasons before Hurricane Katrina put the exclamation point on the end of the Haslett era.

And now the 2022 Saints find themselves in a similar position as the 2002 Saints.

Jameis Winston is not a bad quarterback. I’m a Jameis fan.

But he’s obviously hurt – with back and ankle injuries – and not able perform at a high level. Even surrounded by talent he can’t get the job done. Winston has a very able backup.in Andy Dalton.

If Saints head coach Dennis Allen wants to follow Haslett’s footsteps, he should first make a point of seeing how things ended for the star-crossed Saints coach

Aside from a brief stint as interim coach in St Louis, Haslett was never given another opportunity to be a permanent head coach of an NFL team.

In my opinion 2002 was the defining moment of Jim Haslett. He could’ve very well been a Super Bowl winning coach that year, even if with a quarterback not of his choosing.

He’s now in the XFL.

DA inherited a great team and loads of talent so this is more on him than anyone else.

Allen has no excuse for a 1-2 start and things won’t get any easier in London this Sunday.

Allen should not fuss at local fans for being impatient for success. He was given a bountiful inheritance, certainly more than what Mike Ditka left Haslett with when he departed.

Dennis Allen can either be Sean Payton’s successor or Jim Haslett’s.

His fate is in the hands of the quarterback he sends out on to the field.